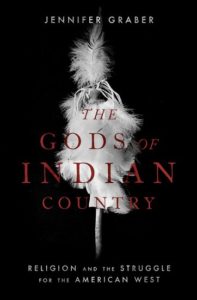 Jennifer Graber is professor of religious studies at the University of Texas at Austin. She is an affiliated faculty member with the Program in Native American and Indigenous Studies. Her book The Gods of Indian Country: Religion and the Struggle for the American West was published by Oxford University Press in 2018. Her first book, The Furnace of Affiliation: Prisons and Religion in Antebellum America, was published in 2011 by the University of North Carolina Press.