In 1962, Hannah Arendt wrote to James Baldwin, who had just published his “Letter from a Region in My Mind” in the New Yorker. Arendt began by expressing her admiration for the essay, but went on to point to the error, as she saw it, of introducing love into politics: “What frightened me in your essay was the gospel of love which you begin to preach at the end. In politics, love is a stranger, and when it intrudes upon it nothing is being achieved except hypocrisy.” Where Baldwin had underscored the African American attributes of beauty, capacity for joy, warmth, and humanity, Arendt saw the “well-known characteristics of all oppressed people. They grow out of suffering and they are the proudest possession of all pariahs. Unfortunately, they have never survived the hour of liberation by even five minutes.”

One recognizes here a familiar Arendtian position on the opposition of public and private, politics and emotions. By extension, Arendt’s admonition can also be read as a particularly sophisticated variation on a popular theme (prevalent in France today) with regard to a collective’s aptitude—or inaptitude—for universalism: because love belongs to the realm of the particular, it has no place in the universal realm of politics. Oppressed minorities’ infelicitous appeals to affect signal political immaturity. Such appeals make for what the French dismissively call communautarisme. Hence, the general reaction to Houria Bouteldja, and to her book, as anti-white, anti-Semitic, sexist, and homophobic.

The way Arendt concludes a similar argument in The Origins of Totalitarianism, however, prevents us from discarding her critique of Baldwin as yet another use of the separation of spheres as a tool to tell barbarians from the civilized. There, she resorts to prophecy, with impressive retrospective aptness: “The danger is that a global, universally interrelated civilization may produce barbarians from its own midst by forcing millions of people into conditions which, despite all appearances, are the conditions of savages.” With this, Arendt anticipates Bouteldja’s diagnosis of the history of postcolonial, maghrebian immigration to France, and what links this history to deculturation on the one hand, and, on the other, the recent explosion of delirious ideologies (e.g., the racism, anti-Semitism, and homophobia of ideologists like Alain Soral and standup comedian Dieudonné, matched by, and sometimes indistinguishable from, the rantings of French white supremacists; the violent attacks in Paris in January and November 2015). 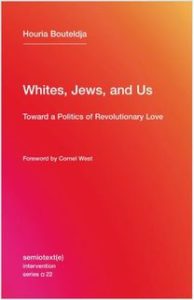 “We have realized the white prophecy to become non-beings or barbarians,” writes Bouteldja. “Our complexities and our nuances have evaporated. We have been diluted, confiscated from ourselves, emptied out of all historical substance. We claim to be what we have been but are nothing but fantasmatic, disarticulated caricatures of ourselves. We cobble together disparate scraps of identity, held in place with bad glue. Our own parents look at us, perplexed. They think: ‘Who are you?’”

It is worth lingering on this “we,” one that valiantly refuses to replay the operative distinctions. Bouteldja’s “we” is resolutely impure, as is the “you” she addresses. And because it is impure, it is political. It recognizes that racialization has produced distinct brands of racism and of acting out, but it also suggests a refashioning of alliances along political, non-ethnic—that is, non-racialized—lines. Yet, such refashioning must take place whilst at the same time rejecting the paradoxical injunction made to postcolonial immigrants and their offspring (those who, according to the Parti des Indigènes de la République’s analysis, live in France under unspoken remnants of colonial-era laws governing “natives”) to escape the pariah condition. This implies assuming both the risk and imperative linked to the fact that any member of a pariah collective must choose between rebelling and being—in Arendt’s words—“responsible for [their] own oppression.”

Back, then, to Arendt’s letter to Baldwin. The position she expresses there is consistent with what she will write a few months later in her famous reply to Gershom Scholem, who accused her of lacking “love for the Jewish people” after the publication of Eichmann in Jerusalem. Indeed, retorts Arendt, the feeling of love should be reserved for friends rather than for ethnic, national, or political collectives. Such good sense usefully opposes the nationalist mysticism of Scholem, who has by then abandoned, as Amnon Raz-Krakotzkin has shown, the more lucid analyses of his early years in Mandatory Palestine. In 1931, after all, a younger Scholem had harshly criticized the alliance made by the Zionist movement with “the visible, aggressive power” of imperialism. He had invited Zionism to reconsider and choose its camp between the imperialist West and an emerging revolutionary East. Such a choice could owe nothing to cowardice nor to opportunism, the “danger of death” being as real, in Scholem’s thinking, on either side of the divide. His conclusion had been unequivocal in favoring the East: “And if we do not win once again, and the fire of revolution consumes us,” he wrote, “at least we will be among those standing on the right side of the barricades.” Yet by 1963, he had moved away from his early engagement for binationalism and was drawing closer to more irresponsible, and blatantly nationalistic, blends of both Zionism and Jewish identity. The Scholem Arendt replies to in 1963 is, therefore, someone who indeed needs to be reminded of the dangers harbored by any collusion between “love”—and particularly “self-love”—and “politics.” But while this is certainly true in a context of political sovereignty, things are different when involving an oppressed minority.1

Arendt claims the same kind of expertise in her letters to both Scholem and Baldwin, an expertise on the impossible rapport between private emotional life and worldly engagement. But that difference in context means her argument cannot be read in the same way across Scholem and Baldwin. For it is in the idiom of another “tradition of the oppressed” that Baldwin writes of love and politics, one that has reinterpreted the command to love so as to work it into an affective configuration powerful enough to transcend the emotional negativity produced by oppressive situations. In Just Above My Head, Baldwin’s narrator recalls a moment of rage triggered by racist behavior:

It’s a dreadful place to be. I’ve been there a few times since—hope never to have to go there again. There is a blood-red thunder all around you, a blinding light flashes from time to time, voices roar and cease, roar and cease, you are in the grip of an unknowable agony, it is in your shoulders, your arms, your hands, your breath, an intolerable labor—and, no, it is not at all like approaching an orgasm, an orgasm implying relief, even, sometimes, however desperately, implying the hope of love. Love and death are connected, but not in the place I was that day.

Thus in The Fire Next Time, what is at stake for Baldwin is neither “Christian” love (whatever that means), nor “neighborly love,” much less the “love of enemies.” There is no Lacanian “demand for love” either: “I do not know many Negroes who are eager to be ‘accepted’ by white people, still less to be loved by them; they, the blacks, simply don’t wish to be beaten over the head by the whites every instant of our brief passage on this planet.” At stake, rather, is the escape from a fate that is emotionally destructive for the individual as well as for the oppressed collective.

Baldwin criticized Richard Wright for binding American blacks to such negativity. Arguing against it in The Fire Next Time, Baldwin was inviting “the relatively conscious whites and the relatively conscious blacks” to act “like lovers,” to “change the history of the world,” failing which the prophecy–“God gave Noah the rainbow sign, No more water, the fire next time”–would come about. The alternative is clear, and though it is not heard by Arendt, there is every reason to think that her friend Walter Benjamin would have agreed.2 As would have Scholem in 1931. The love of which Baldwin speaks is a bit like that of C. L. R. James, whom Bouteldja makes into “a believer in revolutionary love.” “These are my ancestors,” she writes, quoting James, “these are my people. They are yours too if you want them.” And she formulates her own “generous proposal”:

If things were as they should be [she tells “white people”], the most conscientious of you would be tasked with making us a proposition to avoid the worst. But things are not as they should be. It is incumbent upon us to fulfill this task . . . What would be convincing enough to make you give up on defending the racial interests that comfort you out of your downgrading and thanks to which you have the satisfaction of dominating (us). Other than peace, I don’t know what it would be. By peace, I mean the opposite of “war,” of “blood,” of “hatred.” I mean: living together peacefully.

(How is that for a “communautariste” statement?)

And to “Jews,” she writes: “You are still in the ghetto. Why don’t we get out of there together?”

(How is that for an anti-Semitic suggestion?)

In such proposals, voiced by James, by Baldwin, and by Bouteldja, there is—to put it in Jacques Rancière’s terms—the horizon of a new political subjectivation.

Revolutionary love is what Rancière might call a “method of equality.” It allows for a political subjectivation that operates from the moment equality is asserted. If every member of a pariah collective must choose to be a rebel or “to be responsible for their own oppression,” they must also find a way to escape the destructive, affective negativity (for them as for the other) produced by their condition. For this, only two ways are possible: revolutionary violence or revolutionary love. Baldwin knew that when the oppressor refuses the “generous offer” made by the oppressed (and, alas, when did such refusal fail to occur?), the fire next time. As for Scholem, he also knew that, faced with “the fire of the revolution,” one must choose “the right side of the barricades.” Not so much in order to save our lives—and here we must remember Arendt’s beautiful reading of Franz Kafka’s Trial—as to ensure that we will be outlived by something other, or something more, than shame.

With special thanks to Gil Anidjar for translation.

Joëlle Marelli is an independent researcher and translator from English, German, and Hebrew, into French. She has published on issues linked to collective identities in translation. From 2010 to 2016 she headed a research program (titled "Traduire le peuple et l’exil") at the Collège international de philosophie in Paris.