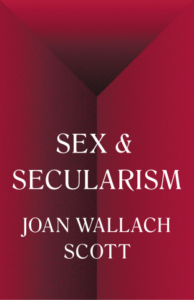 I decided to write Sex and Secularism after I published The Politics of the Veil in 2007. That book dealt critically with the 2004 French law banning Islamic head scarves in French public schools. Laïcité, the French word for secularism, was a prime justification for the law; its proponents argued that this fundamental principle of the republic required “neutrality” of students as well as teachers in elementary and secondary schools. In the years that followed, the French use of secularism to denounce Muslim practices resonated across Europe and even popped up in the United States. There was no specific event that prompted my interest; rather, it was the way political rhetoric insisted on the superiority of an undefined “secularism” to Islam. Secularism had become, in the words of Hanan Karimi, the magic wand (la baguette magique) that only had to be waved to proclaim the inassimilability of Muslims to Western cultures. In the United States, various proposals by state legislators to outlaw so-called shari’a law were only the tip of the Islamophobic iceberg. It was clear that “secularism” (even if it came with Christian overtones) had gained growing importance in the post 9/11 world as a way of distinguishing “us”—the West—from “them”—the Muslims. In these usages, secularism was taken to be a common sense notion referring to the superiority of “our” way of life and, implicitly, a way of minimizing the problems “we” continue to face, among them discrimination based on sex and race.

My particular interest was in the claim that gender equality was guaranteed by secularism (understood to mean the separation of church and state, the end of appeals to transcendent authority) and had been so from “the beginning” (usually the Enlightenment or the French and American revolutions). I knew this was not the case because generations of second-wave feminist scholarship had demonstrated the reverse: that gender inequality was a persistent feature of modern democratic nation-states. Even though reforms have been accomplished, like winning the vote or the right to abortion, the notion that natural differences of sex explain inequalities between women and men continues; women are still, in Simone de Beauvoir’s famous book title, “The Second Sex.” The persistence of these inequalities (power, access to jobs, inferior wages, the experience of sexual harassment and domestic violence) is evident today—as the #MeToo movement has documented. My book returns to second-wave feminist scholarship and to a large body of writing on secularism, race, and colonialism to offer a synthesis of their findings. I bring to that material a set of interpretations that draw on poststructuralist and psychoanalytic theory.

In the book, I argue that secularism was for modernity (to cite Judith Butler), “the condition of thought itself.” I approach secularism as a discursive field in Michel Foucault’s sense, which (in the apt characterization of Thomas Lemke) “includes the delineation of concepts, the specification of objects and borders, and the provision of arguments and justifications.”1 The chapters in the book explore the continued importance of religion (particularly Christianity) in the discourse of secularism, the influence of liberal notions of contract on ideas of what counts as equality, the ways in which women became synonymous with religion and antithetical to politics in the course of the nineteenth century, how sex became confined to reproductive heterosexual marriage, and the connections made between gender, race, nation, and imperialism.

I also track changes in the discourse of secularism in response to the Cold War and feminist movements in the 1960s, exploring the recuperation of the emancipatory promise of sexual liberation for neoliberal projects that ignore (indeed that reproduce) persistent patterns of economic inequality within and across the borders of the global north and south. When sexual liberation (the right of individuals to the choice of their own sexuality) becomes the only test of emancipation, it stigmatizes those whose religious or cultural practices address sex and sexuality differently. It also places the blame for the discrimination of all kinds (economic, social, political) that they experience on those sexual practices, rather than on the racism that marginalizes or excludes them. The lack of emancipation is said to be self-inflicted rather than imposed from outside.

Overall, the book aims to do two things: First, to offer a history that documents the ways in which gender inequality was built into the discourse of secularism; and second, to theorize the relationship between gender—the mutable attempt to establish a grid of intelligibility for the difference of sex—and politics—the institutionalization of power and its justifications. Gender and politics are inextricably interconnected, I argue, each looking to the other for its legitimation.

I think the original contribution of the book is its theory about gender and politics. It develops and deepens arguments I have been making for a while about the ways in which psychoanalytic theory about the difference of sex enables us to historicize the question of gender. (Ironically, the charge against psychoanalysis by many historians is that it is unusable because it is ahistorical.)

Following Sigmund Freud (and the rereadings of Freud by Jacques Lacan and Jean Laplanche), I argue that the difference of sex is ultimately inexplicable. I will quote from the book on this point:

Gender and the sex and sexuality to which it refers—whose meanings it produces—are mutable concepts because they refer to an intractable psychic dilemma: there is no ultimate sense that can be made of differences of sex. Appeals to timeless, natural, or biologically determined differences between men and women are attempts to assuage the anxiety that comes with this indeterminacy and to provide a model for social and political organization.

To this sense of psychic indeterminacy, I add Claude Lefort’s notion that democracy brings with it an indeterminacy of its own about how to (and who does) embody the abstractions of nation, representative, individual, and citizen. There is no concrete embodiment for democratic rule (as there was under absolute monarchy), just as there is no ultimate explanation for the difference of sex. So, in the modern age, at least, each looks to the other for certainty: The supposed natural difference of the sexes attempts to explain why men predominate in politics (and in many other spheres, as well) and the reference to that natural difference as a justification for politics secures gender inequality, explaining it not as socially constructed inequality, but as a fact of nature. I argue that we have not done away with that relationship; that in order to understand persisting inequalities—everything from gender wage gaps to violence against women—we need to understand the ways in which gender and politics constitute one another in different ways, at different times, and in different places. I also argue that the very fact of these uncertainties, these indeterminacies, lets us historicize questions of gender, of equality and inequality, and so of change. Therein may lie some hope for the future.

Joan Wallach Scott is Professor Emerita in the School of Social Science at the Institute for Advanced Study (Princeton, New Jersey). Her recent books are The Fantasy of Feminist History (2011) and Sex and Secularism (2017). In the fall of 2018, Columbia University Press published the thirtieth anniversary edition of her classic, Gender and The Politics of History. Columbia also published a collection of her essays, Knowledge, Power, and Academic Freedom. A new book, On The Judgment of History, will be published by Columbia in the fall of 2020.