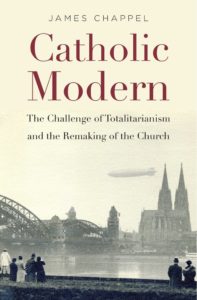 The Catholic Church is one of the most powerful organizations in the world. No other institution has access to such a rich network of schools, universities, hospitals, and churches; no other institution, therefore, is better suited for the global circulation of ideas and practices. Any plausible response to climate crisis, mass refugee flow, and other challenges of our new century will involve the Church, in one way or another. But in which way? Under the controversial leadership of Pope Francis, Catholics are struggling over the future of their Church—a struggle that will have considerable impact on the future of our shared world.

The Church, like no other institution of its size, is beholden to its past. That past is, however, often misunderstood. As scholars and citizens, therefore, we lack a solid understanding of what sorts of tools the Church employs to engage with the modern world, and where they come from. Catholic Modern: The Challenge of Totalitarianism and the Remaking of the Church offers a new account of how the Catholic Church evolved over the course of the twentieth century, and in turn offers a new understanding of the dilemmas faced by the Church today. The question asked by the book is a simple one: when, why, and how did the Catholic Church become modern? Building on discussions in The Immanent Frame and elsewhere, I suggest that, when it comes to religious institutions, “modern” can have an analytically precise meaning. It should not be equated with liberal, tolerant, progressive, atheist, or democratic. Modernity is, very often, none of those things. “Modern” can refer, instead, to what readers of TIF might call the “secular condition”: one in which religion is safely sequestered into something called the “private sphere.”

Scholars of secularism have been pursuing this line of research for some time, focusing mainly on the ways secular states conjure and manage specific discourses and communities as “religious.” Catholic Modern comes at this problem from the other direction, asking how Catholics themselves modified and updated their faith in order to make peace with a world of secular nation-states and religious freedom. Those interested in the specific mechanics of my analysis, and the specific interventions in the history of modern Europe, can turn to the book itself. In the space afforded here, I will offer the broad strokes of my revisionist history, and explain why I think it might matter.

The first question to ask is when the Church became “modern.” Most readers probably assume it happened in the 1960s with Vatican II. This account reproduces the stereotype of the top-down, authoritarian Church. My book, though, does not focus on popes and bishops but on the laity (and, specifically, the laity in France, Germany, and Austria). I focus, that is, on the hundreds of millions of Catholics who, for secular historians and post-Vatican II theologians alike, constitute the Church. For them, and to a surprising extent for the papacy too, the main event was in the 1930s. As late as the 1920s, it was vanishingly rare to find “modern” Catholic discourse in the sense outlined above. Many Catholics participated in modern economic and political structures out of pragmatism, of course, but the conceptual legitimation of that practice was lacking. Conceptually, Catholics were still trying to imagine alternatives to modernity, as they had since the French Revolution.

In the 1930s, Catholics began to speak, really for the first time, of human rights, religious freedom, and secular statehood as positive goods, and not only as enemies to be vanquished. Why did they do so? Certainly not because they were responding to the Holocaust, decolonization, or the sexual revolution, none of which had happened yet. They adopted a new, modern strategy because, in their view, they had no choice. The 1930s was an era of grand state-building projects, and one that, to the Catholic observer, held unprecedented dangers to the Church. Nostalgia for a medieval settlement seemed naive and, even worse, counterproductive. To confront the real and imagined threat of totalitarianism, and the very real economic suffering unleashed by the Depression, nostalgic monarchism simply would not do. Catholics needed a new discursive mechanism to legitimate their claims on the body politic. And that mechanism would have to be modern.

From the 1930s onward, then, Catholics ceased trying to overturn modernity and began agitating for properly Catholic forms of modernity. To do so, they had to make a series of agonizing choices. The Church had long provided a total vision for social renewal. To be translated into a modern context, some elements would have to be jettisoned. But which ones? This question, I discovered, was answered in two fundamentally different ways, linked with two different political strategies and two separate understandings of what a properly Catholic modernity would look like. To understand this process, it is necessary to return to the definition of modernity canvased earlier. A religious community becomes “modern” once it accepts the fact that the faith and its jurisdiction can legitimately be sequestered into the private sphere: once, in other words, the “separation of Church and state” (or Church and economy) is sanctified. This begs the question, though, of how the private sphere—the space of religion—is to be constituted. It is often presumed that the “privatization” of religion sequesters it into the mind of the believer. In historical reality, this never happens (or if it did, we would have no way of knowing). The privatization of religion does not erase the public face of religion but modifies it, as religious communities and believers seek forms of belonging and action that are compatible with the secular condition.

The mainstream Catholic position, and the one that legitimated unwavering anti-Communism, was that the private sphere is defined by the family (in the book I call this “paternal Catholic modernism”). Catholics in the 1930s came to place the sexually normative family at the heart of their mission more than ever before—for the first time, it became obvious that neither the state nor the economy should be allied with the Church. Catholics came, that is, to defend secular welfare states and organized capitalist economies so long as their benefits redounded to the family, and so long as the state took the proper attitudes toward abortion, homosexuality, and divorce. This strategy was originally designed as a way to accommodate secular regimes in the 1930s, in the name of anti-Communism. Many of those regimes, it bears pointing out, were fascist. This strategy proved a useful way to legitimate Catholic support of secular authoritarian regimes, and it did not counsel any particular objection to anti-Semitism, either.

The Catholic “focus on the family” is so ubiquitous today that we can forget how recently it crystallized. It was only in the 1930s that Catholics, as the corollary to their withdrawal from political and economic theology, placed sexual and family ethics at the core of their mission. This has been magnificently successful, in a way, as it has galvanized Catholic politicians and activists with great success for almost a century. (This is probably because Catholic sexual ethics are compatible with the biopolitical requirements of many nationalist political projects.) Across the world, Catholics have agitated to ensure their teachings on abortion, homosexuality, and divorce become the law of the land. They do this not because they reject modernity but because this is their modern strategy, designed to protect and enshrine their vision of the sacred private sphere.

This has never been the only form of Catholic modernism on offer. Also in the 1930s, a transnational and dissident network of antifascist Catholics imagined something different (Jacques Maritain was the most famous). Developing a strategy I call “fraternal Catholic modernism,” they were in some ways more faithful to the totalizing ambitions of past Catholic theory, even if they were unapologetically modern. Essentially, they refused to define the private sphere in terms of the nuclear family. The Church had long called for a world of weak states and a dense civil society of workers’ organizations, women’s groups, and local activism. Fraternal Catholic modernists, wary of the increasing power of the secular state, updated this element of the tradition instead, reasoning that it could very well be applied in interconfessional, interracial, and modern ways. They called for Catholic and socialist workers to work together at the heart of powerful trade unions, for instance, and they called for Catholics and Jews to craft new kinds of pluralist citizenship. They did not reject the Church teaching on the family, but they did recognize that a healthy family life could not be disentangled from emancipatory social and political projects.

Each of these strategies survived across the chasm of World War II and into the present. Sometimes, as in the era of Christian Democracy, they entered an uneasy truce. At other times, as in the late 1960s, they exploded again into open conflict. We seem to be living through another of those times right now. Pope Francis is only the most visible of the many Catholics who are seeking to reinvigorate forms of Catholic ethics that focus less on sexual matters than on political, economic, and, now, ecological ones.

My goal is not to privilege one of these strategies over another, or to claim that one or the other is a more legitimate updating of the Catholic tradition. Both have proven inspirational to many people, and both have been employed in the name of social emancipation. My goal, instead, is to provide a better narration of the Church’s recent past so the present tensions and future direction of the Church can be better understood, by those inside and outside the Church. If the future is like the past, the struggle over the Church will be one involving the masses of laity as much as it does the leadership in the Vatican. And if the future is like the past, its outcome will matter to all of us.