One of the core issues of the Israeli-Palestinian conflict is Israel’s contentious demand that Palestinians recognize it as a Jewish state. The Israeli Prime Minister Benjamin Netanyahu has made such recognition a pillar of his negotiations with the Palestinians, calling it “the real key to peace,” “the minimal requirement” and “an essential condition.” Coupled with a prolonged attempt to anchor Israel’s Jewish identity in quasi-constitutional legislation, this demand betrays the fact that a genuine disagreement has been surrounding the very basic notion of Israel’s identity as a Jewish state, both inside and outside the state. Clearly, the political discourse around the matter has gained a unique character as a debated, sometimes controversial, premise lying at the core of not only the negotiations between Israel and the Palestinian Authority, but also the very foundation of Israeli socio-politics.

Indeed, the question of Jewish sovereignty—or the meaning of the Jewishness of Israeli sovereignty—overshadows Israeli socio-politics. It shapes Jewish identities in Israel and dictates the status of non-Jews in the state, as well as relations between Israeli Jews and diaspora Jews. It also overshadows Israel’s role in Middle Eastern politics at large. Yet while being the focus of an expansive academic and political discourse, the consequences of Jewish sovereignty in the State of Israel nevertheless allude most commentators. 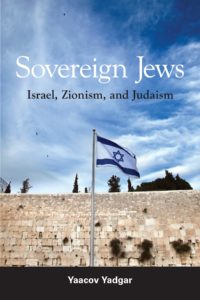 My recent book, Sovereign Jews: Israel, Zionism, and Judaism, harnesses the powerful critique of the dominant secular(ist) epistemology, which is familiar to readers of The Immanent Frame, to re-problematize the very notion of Jewish sovereignty. The book critically assesses the ways in which Zionism and the State of Israel have negotiated with Jewish traditions preceding them.

Sovereign Jews argues the key to understanding the alleged convoluted relationship between religion and politics in Israel is the State’s interest in maintaining its sovereignty as the nation-state of Jews. This demands that a majority of its population is marked and maintained as Jews, and a distinction between them and non-Jews is clearly delineated. Coupled with the failure of Zionist ideology and the Israeli State to formulate a viable so-called secular national identity, the sovereign, supposedly-secular state uses a narrow and problematic interpretation of what it sees as Jewish religion as a central political tool for maintaining a Jewish majority.

The Zionist-Israeli case offers a fascinating explication of the fallacy of secularism, especially since it implicitly or explicitly reads the European, Protestant traditions of the nation-state into a non-European and non-Christian context. This reading necessitates the revelation of hidden roots of what otherwise presents itself as a universal narrative of human progress. The book offers, in other words, a narrative of the European Other’s attempt at adopting the European discourse of modernity, and the exposition of the hidden roots of ensuing discourse.

In place of biased secularist discourse, the book offers a critical Jewish reading of the Zionist idea and the Israeli nation-state. It focuses on the interested, manipulative, and often denied ways in which Zionism and the State have negotiated with the histories and traditions of communities of Jews preceding the Zionist project and its culmination in the State of Israel. This reading is motivated by what I term a traditionist outlook, which occupies a space outside of the binary structure of friend versus enemy. The dominant self-understanding of the West as secular, enlightened, and modern is constituted upon the latter. Therefore, the book’s stance overcomes the secularist, modernist suspicion of tradition as a relic of the benighted past, highlighting instead the dialogical and dynamic nature of our relation to tradition. At the core of this understanding of tradition is an emphasis on tradition’s foundational, or constitutive, nature.

Seen from this perspective, tradition emerges as a rather dynamic meta-structure into which one is born and within and through which one acquires her sense of the world. One develops her sense of agency, subjectivity, or selfhood: in short, her individuality. Tradition is thus viewed as the infrastructure that both enables our self-understanding and sets its limits, even when self-understanding comes to be defined by its rebelliousness against tradition.

Viewed from this perspective, Zionism emerged as entailing a transition from the (traditional, historical) understanding of Jewish identity through a dialogue with diverse traditions to a (modern) so-called natural, or ethno-national, definition of identity. In effect, transformation conditions the viability of Jewish politics in Israel on the active preservation of a biologically or ethnically defined Jewish majority.

Among other things, the Zionist ideological revolution imposed a shift from history or tradition to biology or “blood.” While historically Judaism, however understood, preceded the Jew (i.e., Jews were defined by a normative and practical outlook to which they adhered), the Zionist idea would proclaim the Jew precedes Judaism. Judaism, it would argue, has no essential features of its own. Judaism is everything Jews—or, to be precise, national, sovereign Jews, i.e., Zionists—do. Whether it corresponds to traditional understandings of Judaism or not is irrelevant. What is relevant is that it is the outcome of the doings of (sovereign) Jews.

Read politically in the context of a sovereign nation-state of Jews, this idea has been understood to mean the so-called ethnic or biological make-up of Israeli society is a precondition of the state upholding its very raison d’être: Israel is only a state of Jews. It is not a Jewish state in the sense of answering to some normative sense of Judaism. This, indeed, has been a rallying cry of secularist Liberal-Zionists to this day. They, in other words, would argue that the only viable meaning of Jewish sovereignty is that it is a sovereignty held by Jews. Yet, as anyone who is even slightly familiar with Israel would know, this is not the prevailing sense in the country. It is not by chance the notion that Israel is indeed a Jewish (always accompanied by “and democratic,” of course) state has been a staple of Israeli political discourse and quasi-constitutional legislation in recent decades.

Zionist ideology and the socio-politics of the State of Israel emanating from it maintain an unresolved tension around the very meaning of a supposedly secular Jewish nationalism. First, to propagate Jewish sovereignty, or the sovereignty of Jews, Zionist ideology would claim sovereignty—or, to be precise, its manifestation in the political form of a Jewish nation-state—defines Jewish (national) identity. But the very struggle to achieve sovereignty—and especially a campaign to achieve sovereignty over a land inhabited mostly by non-Jews—has been conducted and justified in the name of Jewish nationhood. There must be, then, a prior distinction that precedes sovereignty to defining Jewishness. Even in the narrowest of nationalist understandings of the meaning of political Zionism, that is, a view of the State of Israel not as a Jewish state but rather as simply a state of Jews, the question remains: What is a Jew?

Zionist ideology has never offered a self-sufficient definition of Jewish national identity independent from rabbinical readings of Jewish identity and of Judaism. At the same time, this ideology has zealously rebelled against rabbinical authority and against what it saw as religion in general. As a result, Zionism was left with a biological or racial notion of Jewish identity. Tautologically, it would argue a Jew, simply, is a Jew; Jewishness is something someone is born with. One does not choose it, nor can one rid oneself of her Jewishness; it is in one’s “blood.”

This tautology, which has dominated pre-state Zionist ideology and shaped much of the Zionist ideologues’ discussions on Jewish identity, proved insufficient in the framework of a nation-state that self-identifies as the state of Jews. The establishment of the sovereign nation-state of the Jews has transformed the meaningful identification of Jewishness into an existentially political one. It bore directly on the state’s survival as the nation-state of Jews. Since the state, following the logic of mainstream Zionist ideology, viewed itself as secular, it could not explicitly rely on what it viewed as religious elements of Jewish identity (such as Jewish law) for its own identification as Jewish.

The state, then, chose not to focus on maintaining a Jewish sovereignty, that is, a sovereignty that dialogues with Judaism as a constituting tradition. Rather, it maintained the sovereignty of Jews. In order to achieve this, the so-called secular state endowed the Orthodox, religious rabbinical establishments with the role of the ethno-national gate-keeper. The rabbis decide who counts as a Jew and officiate the Jews’ personal matters, making it quite difficult for them to marry non-Jews, thus perpetuating the distinction between the two groups. But this is far from instilling Jewish sovereignty with any meaningful content, beyond the fact it is a sovereignty held by people of Jewish origins or “blood.”

A traditionist stance suggests the articulation of a Jewish politics free from the framework of the nation-state’s worldview is a way out of this impasse. Ultimately it argues for the articulation of an independent Jewish political language, nourished by a meaningful familiarity and dialogue with Jewish traditions. Furthermore, one that reflects critically upon those traditions while also critically corresponding with some of the predominant traditions today (such as nation-statism, capitalism, individualist liberalism, etc.). Critical reflection would have to challenge and resist these traditions’ tendency to force us into one-dimensional frames, which are insensitive to the great variety of human life.

Yaacov Yadgar is the Stanley Lewis Professor of Israel Studies at the School of Interdisciplinary Area Studies and the Department of Politics and International Relations, the University of Oxford. His previous publications include Secularism and Religion in Jewish-Israeli Politics: Traditionists and Modernity.