Golden wall for text and background 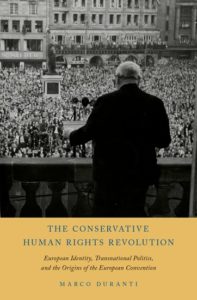 traces the origins of the European human rights system from the Hague peace conferences before the First World War to the adoption of the European Convention on Human Rights (ECHR) in 1950. It also presents a new interpretation of the roots of Europeanism and Euroskepticism, one that stresses the cultural and ethical dimensions of European integration rather than its technocratic aspects. Though much of the book is devoted to the early decades of the twentieth century, the bulk of its emphasis is on the hinge years 1946 to 1950, when the movements for European unity that emerged from the ashes of the Second World War were at the height of their influence. This was a period in which there emerged a narrow window of opportunity for the leadership of these movements to catalyze a revolution in the international architecture of Europe and shape it in accordance with their Christian conservative views.

In the aftermath of the Second World War, the crisis that confronted Europeans was not just material in nature. Europe, the self-proclaimed engine of moral progress, torchbearer of liberty and virtue, had over the previous three decades become the West’s heart of darkness, barbarism incarnate. Western European elites, once smug in their conviction that they ruled over the nexus of the civilized world, had lost their swagger. Whereas in the nineteenth century the word “civilization” had widely been understood as synonymous with Western European culture and ethics, the much-vaunted qualities of “civilized Europe” now appeared to be no more than a distant memory. Into the void entered socialism as the new spirit of history. In Britain, the Labour Party decisively bested the Tories in the July 1945 general election. Three months later, across the Channel, communists and democratic socialists won a majority of seats in the new French constituent assembly. Not until 1951 would conservatives win parliamentary majorities in either country.

A diverse array of conservatives at once found themselves scrambling for a common moral vocabulary capable of shoring up confidence in the traditional sociopolitical order. These conservatives spoke of the recreation of a “European family” whose ties preceded those of the nation and whose political expression was a European union or federation. They imagined Europeans as sharing a long history of cultural unity that stretched back to the united Christian Europe of the High Middle Ages and Renaissance. The European community of peoples, they claimed, was knit together by a shared commitment to individual freedom and the rule of law. These principles were not posed as recent liberal innovations but rather as part of Europe’s Christian and humanist heritage. The formation of a European union thereby would mark at once an end to the cataclysmic age of total war and a nostalgic return to the lost unity of a bygone era.

Human rights offered a vocabulary ideally suited to such a reinvention of European traditions. Understood as at once universal and distinctly European, human rights could be invoked as Europe’s unique inheritance as well as its greatest gift to the world. In this interpretation, to be properly European meant to be free to exercise one’s human rights. Hence “Europe” and “Western Europe” were now increasingly seen as one and the same, as the European peoples in the Soviet bloc had fallen under the shadow of a new Oriental despotism. To construct a European union on this basis was not to plunge Europeans into an unknown future or compel them to break with their deeper past. Rather, it was to lead them back to the more enlightened, harmonious civilization of their ancestors. From a more instrumental perspective, conservative Europeanists framed their human rights initiatives in such a manner that colonial subjects and communists would not be entitled to equal status in a new European organization of states as they were not considered to belong to the historical community of European peoples who honored the ethical inheritance of the West.

The most famed of these conservative Europeanists was Winston Churchill, whose realism was coupled with a free-market worldview and Christian romantic sensibility that did much to mold his approach to foreign affairs. Another key figure in the British contingent was the former Nuremberg trials prosecutor David Maxwell Fyfe, likewise a Member of Parliament on the free-market wing of the Conservative Party. Churchill’s involvement during his tenure as Leader of the Opposition after the Second World War was critical to generating support for the creation of European institutions at a moment when most of those statesmen later anointed the “Founding Fathers of the European Union” had yet to take center stage. Maxwell Fyfe, by contrast, was most effective behind the scenes as a draftsman, doggedly insisting that the European Convention on Human Rights not be modeled too strictly on the cosmopolitan, social democratic paradigm of 1948 Universal Declaration of Human Rights.

A number of French contemporaries also made important contributions, among them Alexandre Marc, Louis Salleron, and Pierre-Henri Teitgen. Critics of capitalism and Marxism alike, all three were Catholic social conservatives. Salleron and Teitgen had made starkly different choices following France’s capitulation to Germany, the former working for the authoritarian Vichy regime, the latter joining the vanguard of the Resistance. Marc, a self-described “nonconformist” who was close to individuals on both sides, had been forced to flee to Switzerland on account of his Jewish ancestry. Without their collective efforts, it is unlikely that the European Convention on Human Rights would have provided for the creation of a truly supranational European Court of Human Rights that could adjudicate on claims submitted by private individuals and NGOs rather than states alone.

Domestic political objectives were as important to conservative Europeanists as international politics. Conservative Europeanists invoked international human rights norms for different purposes. Nevertheless, they were united in their belief that a democracy in which tyranny of the majority held sway was little better than a dictatorship. The rights of the minority, like the autonomy of the individual and groups in civil society, were not to be sacrificed at the altar of the unitary nation-state. Pluralism, not popular sovereignty, was their watchword. While their socialist opponents called them anti-democratic, conservatives saw their aim as protecting democracy from itself. Totalitarianism, they believed, was a contagion whose carriers were not limited to communists and fascists, for it could metastasize within democratic movements and persist even after the fall of authoritarian regimes. Socialism was alleged to be its breeding ground, especially that of the Marxist variety, but so, too, were certain aspects of liberalism and republicanism to blame. With domestic courts having proven themselves unable or unwilling to uphold the rule of law against overweening executives, in their eyes, a new international solution was needed. For conservatives, this was not to be found in what they regarded as the soulless internationalism of liberal technocrats, with their naive faith in scientific and technological progress. A return to tradition and older forms of community would form the bedrock of a free and united Europe, not technocracy.

Conservative human rights politics were an act of defiance, like the many conservative rebellions against the centralization of state power that preceded it. “Free-enterprise Tories,” who at home accommodated the leftward shift in British politics, waged a neoliberal war of position against the postwar Labour government from their perch in the leadership of the European unity movements. French Catholics who faced defeat on social questions in France seized the opportunity to secure international guarantees of parental rights in the domain of religious education. Some hoped that a European human rights court might help them obtain the release or retrial of Frenchmen found guilty of wartime collaboration with the Axis enemy. They also saw the launching of a transnational legal revolution as an opportunity to revive longstanding Catholic efforts to remedy the ills of parliamentary systems hostage to secularist majorities.

It is said that human rights are akin to a secular religion. Some of the Catholic framers of European human rights law took this analogy quite literally. A new court whose legal authority and moral suasion mirrored that of the medieval Church was to be constructed from the wreckage of a lost Christian civilization. The spiritual reunification of Europe required the subordination of parliamentary democracy to what they called “supranational justice,” a term that rearticulated an older belief that Christian norms should constrain the exercise of sovereign power. Envisioned as a successor to the medieval charters of old, a European human rights treaty held the promise of strengthening the autonomy of Catholic churches, towns, and regions, as well as associations of Catholic farmers and workers. Hence, the decision of conservatives to place themselves at the vanguard of the campaign for a European Court of Human Rights did not mark a repudiation of their longstanding beliefs. Rather, it signaled a recognition born through the lessons of the recent past that conservative objectives and values would be better realized on the transnational plane than the national one.

Marco Duranti is lecturer in Modern European and International History at the University of Sydney, where he directs the Nation Empire Globe Research Cluster. His research specializes in the history of international law and organizations. He is author of The Conservative Human Rights Revolution: European Identity, Transnational Politics, and the Origins of the European Convention (Oxford University Press, 2017).