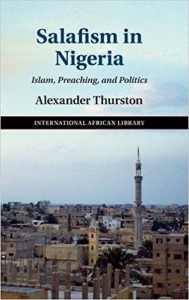 What is Salafism? If you ask Salafis, they will tell you that Salafism is the pristine Islam that was practiced by the Prophet Muhammad and the earliest Muslims (al-salaf al-salih, “the pious predecessors”). If you ask most journalists and security analysts, they will tell you that Salafism is a hardline form of Islam exported from Saudi Arabia and associated with al-Qaeda and the so-called Islamic State.

Recent scholarship has challenged both those views. Scholars are pointing out that while al-Qaeda may have made Salafism infamous, most Salafis are not involved in violence, or even in formal politics. If they were, “the world would look very different.” Meanwhile, many scholars now see Salafism as a twentieth-century phenomenon. One study suggests that for Muslims, the term “Salafism” did not acquire its present meaning until the 1920s, and that the movement’s direction was contested until the 1970s. Other studies show that long before Saudi Arabia was exporting Salafism, it was absorbing influences—from Egypt, India, and West Africa—that played a crucial role in forging Salafism.

Studying Salafism is important not just for analyzing jihadist movements or clarifying twentieth-century Muslim history, but also for better understanding the role of religion in contemporary life. What claims to authenticity are religious movements making? What mechanisms sustain these claims? How do these mechanisms shape the preaching and writing of religious leaders, and the expectations and preoccupations of their audiences?

My new book, Salafism in Nigeria, explores these questions through a case study of Africa’s most populous country. The book argues that Salafism is animated by a canon of texts. This canon foregrounds the Qur’an and the reported words and deeds of the Prophet (texts known as hadith reports). At the same time, the canon gives a surprisingly prominent place to the work of twentieth-century scholars. The canon structures Salafi preaching and is a key tool that Salafis use in debates with other Muslims—and with each other.

The word “canon” is heavily associated with Christianity and especially with Catholicism, where it can refer to texts, law, and even to individual priests. Within Christianity, there are major divisions over which books should be considered part of the canonical Bible, with Protestants since Martin Luther generally favoring a narrower canon. Debates over canons reflect underlying disagreements about the nature and form of religious authority.

The sense of canon as a “normative-prescriptive list” is extremely useful for Islamic Studies. Scholars of Islam have used the notion of canon to illuminate how texts and communities shaped each other in the early centuries of Islam, especially in the legal arena. As with groups from other faith traditions, Muslim communities used canons to draw boundaries around themselves, declaring who was in and who was out.

My book brings the notion of canon into the contemporary period. The Salafi canon took shape between the late nineteenth century and the late twentieth century, and it continues to evolve. Salafi canonizers did not question the canonical text of the Qur’an, but they did challenge core intellectual institutions in Sunni Islam, especially several longstanding, mainstream theological and legal schools. As Salafi canonizers worked to form a unified canon out of more than a millennium of materials, they pored over rare manuscripts. They reorganized tomes of hadith and rechecked their accuracy according to Salafi standards. They evaluated the doctrinal “purity” of myriad thinkers, welcoming some into the canon with open arms, accepting others with caveats, and excluding others. Salafi publishers released new editions of old works, framed by scholastic markers that “Salafized” them: editors’ introductions, author biographies, and footnotes. Saudi Arabian institutions, especially the Islamic University of Medina (founded in 1961), became key nodes in the canonization enterprise, but Saudis were only one part of a global network of thinkers.

In the Catholic Church, one can find official canons and even an anti-canon, the Index Librorum Prohibitorum (List of Prohibited Books, whose official editions ran from the 1550s to 1966). Neither Salafism, nor Sunni Islam generally, has a centralized authority capable of creating or enforcing official canons and anti-canons. In this sense, Salafism may be closer to Protestantism than to Catholicism, and there are interesting comparisons to be made between Salafism and Protestantism in terms of how each tradition constructs authority. When American pundits call for an “Islamic reformation,” they seldom have Salafism in mind, but there is a case to be made that Salafis and their intellectual forebears are the closest Muslim equivalents to Martin Luther in recent centuries.

In any case, the Salafi canon is not fixed. But even if it is informal, there is widespread agreement among Salafis around the world about who forms the core of the canon. One central figure is Taqi al-Din Ahmad Ibn Taymiyya (1263-1328). Ibn Taymiyya is esteemed by Salafis for his vigorous defense of a literalist theology. Ibn Taymiyya is also esteemed for his confrontational attitude toward other Muslims and those he regarded as impure.

The Salafi movement is internally divided, especially on questions of violence. As noted above, the “Salafi-jihadis” are perhaps the most famous exponents of Salafism today. Other Salafis, however, have denounced jihadism. Mainstream Salafis argue that jihadis have a poor understanding of key Islamic concepts and that jihadi violence harms rather than helps the global Muslim community. In Nigeria and elsewhere, Salafi-jihadis have assassinated other Salafis who criticize them. Given these divisions, how can the canon act as a unifying mechanism for the movement?

One reason is the aura of authority that surrounds three major twentieth-century scholars who became fixtures of the Salafi canon: Muhammad Nasir al-Din al-Albani (1914-1999), Abd al-Aziz ibn Baz (1910-1999), and Muhammad ibn Salih al-Uthaymin (1925-2001). From Nigeria to Indonesia, these names recur when Salafis talk about scholarly standards. For example, al-Albani is considered the pre-eminent contemporary Salafi authority when it comes to authenticating hadith reports—an endeavor with the utmost importance for Salafis, who argue that ancient purity can be reconstructed through authentic texts. Al-Albani rejected jihadism, but prominent Salafi-jihadi thinkers continue to praise his hadith scholarship.

Ibn Baz and Ibn Uthaymin, meanwhile, were the foremost exponents of the Salafi creed in the late twentieth century. Some Salafi-jihadis have attacked them for their close relationship to the Saudi monarchy, but others have eagerly claimed a relationship with them. Even when Salafi-jihadis distance themselves from al-Albani, Ibn Baz, and Ibn Uthaymin, they find themselves inhabiting a world those men helped create. When Abu Bakr al-Baghdadi, the leader of the so-called Islamic State, announced himself as “caliph” in 2014, he opened with the “Sermon of Necessity,” a text that al-Albani’s scholarship brought out of obscurity and made into a formula used routinely by Salafis around the world. Even when Salafis disagree and fight, the canon provides an underlying unity for their worldview.

Salafism in Nigeria: Idealizing the Past, Measuring the Present

The story of the Salafi canon parallels the story of Salafism’s spread in Nigeria. As noted above, the Islamic University of Medina in Saudi Arabia was a key institution for canonization and for disseminating Salafism. In northern Nigeria, a Muslim-majority part of the country, the most prominent Salafi preachers of the past several decades were graduates of the Islamic University of Medina.

Many Medina graduates returned home in the 1990s and 2000s. They anchored their preaching in the canon. They presented al-Albani, Ibn Baz, and Ibn Uthaymin as exceptional authorities. The most famous graduate of Medina, Ja‘far Mahmud Adam (ca. 1961-2007), was a devoted admirer of al-Albani, referencing al-Albani’s scholarship frequently.

The Medina graduates used the canon as a structuring device for their preaching and used books from the canon as a curriculum in their teaching. Adam’s lectures were deeply marked by the canon’s influence, often starting with the Sermon of Necessity. He frequently invoked canonical authors not just to discuss the texts they wrote, but to uphold them as moral exemplars for the Salafi community. When the Medina graduates intervened in politics—often by offering public “advice” to elected officials—they invoked the practice of canonical authors as precedent.

For Nigerian Salafis, the canon is more than just a list of important books; it is evidence that in every time and place there existed thinkers capable of reviving Islam. The possibility of such revival is fundamental to Salafism: The canon represents a chain of idealized individuals who embody Salafism’s promise that the passage of historical time need not dilute Islam’s message.

The original Greek meaning of canon as a “measuring rod” is also on display in Nigeria. When Nigerian graduates of Medina got into debates, particularly with other Salafis, they often told opponents that they had failed to meet the standards set by al-Albani, Ibn Baz, and Ibn Uthaymin. The canon became a central object in early debates between the Medina graduates and the jihadi movement Boko Haram (“Western education/culture is forbidden by Islam”), which has gone on to kill over 20,000 people in Nigeria and neighboring countries. In Boko Haram’s early days, its leaders laid claim to the Salafi canon, working to refashion the canon as a platform for jihadist ideology—a project that the so-called Islamic State has also attempted. Such efforts, I suggest in the book, may be generating a “jihadi canon” that is narrower, and differently oriented, than the Salafi canon. Within the Salafi fold, then, we see the types of arguments that have arisen in other traditions, especially Christianity, concerning which texts should be canonical and what should be excluded.

Many religious movements today are informally organized, geographically dispersed, and internally divided. How does religious authority function for such movements? My study of the Salafi canon proposes one answer: It is in the very effort to settle on one’s own spiritual genealogy, one’s own circle of trusted and idealized forebears, that a community is formed and sustained. Canonization—or other mechanisms of authentication—are open to constant renegotiation. But those renegotiations in turn give insight into how religious communities change, and whether they cohere or fragment.

Alexander Thurston is a visiting assistant professor in the African Studies program at Georgetown University. He received his PhD from Northwestern University in 2013. He has conducted field research in Nigeria, Senegal, and Morocco. In 2013-2014, he was an International Affairs Fellow with the Council on Foreign Relations.