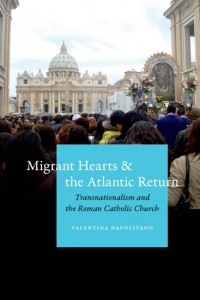 In the study of religion and diversity, we have to reckon, now more than ever, with the “residues” of religious forms of inclusion that are de facto exclusionary. In The Future of an Illusion, Sigmund Freud reminds us that unhappiness arises when there is a loss of the object of love, and that civilization rests on trading a portion of happiness for a “share” of security. Civilization depends upon the coercion and renunciation of instincts that, when they fail, leave the majority of human beings unable to perform the work required for securing new wealth. When the fragile balance of compensation between happiness and coercion tilts, “civilization” itself is put into motion as an origin of violence. The love-objects of civilization are, in this sense, always potentially divisive and exclusive.

For a set of important segments of the Catholic Church today, what I have elsewhere called “Catholic Humanitas” functions as precisely this kind of love-object. In Migrant Hearts and the Atlantic Return: Transnationalism and the Roman Catholic Church, I show how Catholic Humanitas is both a principle and a practice at the heart of the Roman Catholic Church. With the 15C encounter of the “New World” (the Americas), a tension between Sameness and Otherness began to emerge. This was through a racialized distribution of knowledge that shaped belonging to the category of “fully human”—humanitas—into an apparently inclusive, but actually exclusive, attribute of Sameness. The object-loss of this Catholic Humanitas today generates in turn a narrative of increasing and intrinsically violent discontent, emerging in part with the current papacy of Pope Francis—in explicit contradistinction to that of Benedict XVI—and also with an intensified affective attachment to the imagined Christian root of the Western world.

Contemporary engagement with embodied practices of Latin American transnational migrancy, as well as the long durée of the return of Catholic religious materialities, ideas, and fantasies from the Americas to Rome, shows the reignition of an old conflict within the Catholic Church and a lasting paradox within a Catholic Humanitas. This is the paradox growing from the Catholic fantasy of “full” conversion of the Other/Indian, with her imagined docile, childlike, as well as barbaric qualities—a fantasy that positions the Other/Indian as at once within and without a Catholic Humanitas. This constitutive dimension of Catholic Humanitas infuses the tension between Sameness and Otherness that still permeates Western cosmologies and, for better and worse, political practices toward migration and hospitality in Europe.

This tension was originally articulated in the 1500-01 debate at Valladolid, about the nature of the human person and slavery between Juan Ginés Sepúlveda and Fray Bartolomé de Las Casas. As also discussed in the great work of María Josefina Saldaña-Portillo, the encounter with indigenous people required a recalibration of the human and the codification of the unity in humanity to justify a unity of dominion. Other modes and forms of being became read as culturally different within a sameness of humanity guaranteed by potential conversion to Christianity. Likewise, Michel de Certeau argued this project of recalibration is unmistakably at work within what would become a Western project of commensurability of worlds, forced translation into Sameness and the birth of ethnography (as the practice of ethno-graphos) on the depth of the subject/ethnographer. Current engagements with Andean “cosmopolitics,” as Marisol de la Cadena explores, do actually prompt us to resist this drive for the love-object of translation undergirding contemporary notions of multiculturalism—to explore ways to engage with a richness of divergent, (in some respects, incommensurable) coexisting worlds.

Under a present condition—in which a part of the clergy in Rome foregrounds personhood based on a Roman civic heritage, rather than multiple ways of being Catholic—attacks to Catholic Humanitas are seen as an attack on everyday civitas (conceived as a Sameness in the singular). If Catholicism has been a self-evident, “cultural” root of secular Europe, it has just as clearly shaped a potent political aesthetic of exclusion (for a French case, see Elayne Oliphant’s work on Paris). Thus, a number of clergy in Rome have precluded migrants from using certain churches, justifying their actions with the claim that migrants cannot properly take care of the tangible heritage of the Roman Catholic Church—notwithstanding plentiful ethnographic evidence to the contrary. Behind such actions by Roman clergy, it is not difficult to find circles in the Catholic world that have aligned with those in Italy, championing anti-immigration legislation and criminalization of undocumented immigrants.

Catholic Humanitas is not only a theological project of the Church, but is also a pedagogical, apostolic one. The ways in which it is inscribed, transmitted, and transformed in space—and therefore incarnated—are central to an anthropological understanding of Catholicism and to a “Critical Catholic Studies” approach, which queries the mobilization of Catholic underpinnings to affective force of histories and their mattering to intimate, civic, and political spheres of the secular, too.

Engaging with the interdisciplinary field of Critical Catholic Studies is to unravel the articulation of different analytical registers on the past-present of the Catholic Church. This work unfolds through a focus on the Catholic Church’s governmentality (its guidance and regulation of Catholic bodies/souls in tandem with a constant remaking of its internal clerical structure) and its related underlying practices and logics of inclusion and exclusion. This approach clearly overcomes an unhelpful analytical distinction between popular religiosity and the institutional reproduction of the Catholic Church. Contributing to the bourgeoning field of the anthropology of Catholicism, this approach invites us to engage with how Catholic forms (trans)locally connect intimate, global, and, in some cases, imperial affects and histories.

Since 2011, the Holy See became a social member of the Organization for International Migration in Geneva, highlighting an aspect of Humanitas centered on the family. This recent concerted effort to address the condition of uprooted people is driven by a “belief of the unique dignity and common belonging to the same human family of every human person, that is antecedent to any cultural, religious, social, political, or other consideration.” Some of the argumentative responses against potential openings discussed in the 2014-15 Synod of Bishops on the Family, and in Pope Francis’s call (in his Amoris Laetitia) for the Church to embrace a recognition of different forms of love, are ultimately consistent with a love-object for a Church that acquires its mystical strength from the papal ministry of unity in the reaffirmation of one faith. This has been in line with a theological impulse of Benedict XVI, as I have shown in my book, which has reignited a passion for a Catholicism based on papal directives, the culture of life, truth over relativism, and the importance of morals in Catholicism.

To speak of a Catholic Humanitas in this sense is again to emphasize a unitary Humanitas. Given the fraught origins of this discourse, it is perhaps not surprising to find its contemporary articulations conceiving migration through the prism of a heteronormative family and sexuality within wedlock, as well as a general anxiety about non-Catholic immigration in Europe. Yet, efforts to reduce being Catholic to this form of Catholic Humanitas is constantly threatened and undermined in the life of Catholic missions in Rome by the heterogeneities of migrants’ lived experiences, sexuality, and fantasies, which consistently refuse to be contained within a narrative of a heteronormative, Catholic ideal of the family. As anthropologists and/or religionists, we may engage with migrant itineraries that do or do not fit given Church pedagogies about and directed toward migrants that emphasize migrant “suffering,” and the affirmation of a paternalistic Church/flock relation, in which migrants are in need of guidance toward the path of Catholic adulthood. Uncovering or recovering such diverse and divergent migrant itineraries points to another possible form of Catholic Humanitas that is always multiple, situated, and incomplete.

If a site of struggle for global Catholicism and migration centers on the family and multiple ways of being Catholic, then I would argue that the (Freudian) primary scene of this struggle lies in the anchoring of racial formations in a nostalgia for an empire of blood-descent, of Universal Christianity—actually a renewed, modern impetus in the Church, emerged in the 1920s with Pius XI’s proclamation of Christ the King, the “King of  hearts” and of “all mankind”.  As I argue in my book, within a context of this intimate and affective blood-attachment to a universal, yet exclusionary, position of a Catholic people, multiple migrant itineraries—from the Americas to Rome—avail and at the same time challenge this embodied and alive nostalgia of a Christian empire. Perhaps, then, in a new Trump era, in which some Catholics will doubtlessly respond to a universalizing project of the Catholic Church based on the sternness of “the” family and a visceral opposition to undocumented migration, a focus on a long durée of translocal, affective histories can be a helpful reminder that this is neither new, nor inevitable.

Valentina Napolitano is an associate professor in the anthropology department at the University of Toronto. She has published monographs, special issues, and articles on affects, gender and migration, global Catholicism, anthropology of traces and borderlands, Michel de Certeau, and urbanities in transformation in Mexico and Italy. She is currently interested in ethnographic and critical explorations of the intersection between political economy and political theology, on Catholic living infrastructures, and on Francis as a Criollo Pope.