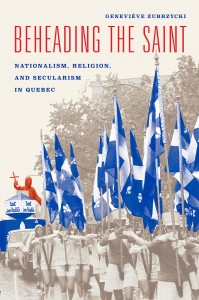 On June 24, 1969, a crowd of youthful protesters following the traditional St. Jean Baptiste Day parade in Montréal seized and overturned the float dedicated to the patron saint of French Canadians. The large statue of St. John the Baptist fell to the ground, its head breaking off from the body. In the following days, the violent gesture was interpreted and narrated following the biblical story of the saint: it was described in the media and referred to in the public sphere as the “Beheading of the Baptist.” With this symbolic death of the saint, the parades disappeared, and new modes of national celebrations were institutionalized.

The attack could have been interpreted at the time as an offensive yet ultimately inconsequential act of vandalism by agitated youth, but as the destruction of the float and the saint were called in the media a “beheading”—with photojournalistic images supporting that interpretation—the incident became an “event” with transformative consequences (Sewell 1996). The attack could be analyzed today by social scientists as “merely symbolic.” Yet this proverbial coup de grâce can also be seen as the last constitutive action in the articulation of a new secular, Québécois national identity, a process in which verbal and physical attacks on the patron saint’s icon throughout the 1960s played an intrinsic role. The debates about, and reshaping of, the national icon were part and parcel of the Quiet Revolution, a period of far-reaching social, political, economic, and cultural transformations that significantly restructured Québec society and the identity of its French-speaking members.

Once called “the priest-ridden province” by its Protestant neighbors, during the Quiet Revolution of the 1960s, the Québécois rid themselves of Catholicism, amputating what a new generation of social activists and political figures viewed as a gangrenous limb poisoning the national body. The building of a modern provincial welfare state allowed the secularization of social services, including education, health care, and social welfare, which were until then provided and controlled by the Catholic Church. The decade was marked by aggressive criticism of the Church in the public sphere, a wholesale decline in religious practice, and a large number of priests and nuns who renounced their vows and reentered secular society.  Many Québécois today, as heirs of the Quiet Revolution, perceive religion as an atavistic residue of the past, surviving only at the margins of society, or else as a foreign concept imported by recent waves of immigrants.

Still, religion is far from being merely an import. To continue with the metaphor of the nation as body, we might say that religion is a skeleton in Québec’s closet, or a palpable absence, like a phantom limb pain. Its lingering presence became apparent in heated debates over the “reasonable accommodation” of cultural minorities’ religious practices, an issue that caused the creation of a special public commission to address the issue in 2006. And the question of religion’s place in a secular Québec reemerged in 2013 in a much-contested proposal for a “Charter of Québec Values” (referred to simply as the Charter of Values or the Charter of Secularism). Although framed in the media and certain political circles as contests between the secular majority and religious minorities, these debates revealed that Québec’s religious past is still very much a feature of its present religious landscape and the challenges it poses for a self-avowed secular society. The debate about the increasing visibility of religion in the public sphere became a deliberation about the very identity of Québec, which reinvented itself over half a century ago with the drastic rejection of Catholicism.

Beheading the Saint is about this shifting relationship between nationalism, religion, and secularism in a society which was, until the late 1960s, exemplary of what Charles Taylor calls the “neo-Durkheimian” link between national identity and religion, wherein “the sense of belonging to the group and confession are fused and the moral issues of the group’s history tend to be coded in religious categories” (2007, 458). I examine how the relationship between French Canadianness and Catholicism was configured in the nineteenth century, how it was reconfigured as Québécois and secular in the 1960s, and why and how that transition informs recent debates over secularism in Québec. The secularization of national identity during the Quiet Revolution remains the key to understanding the role and place of religion in the public sphere in today’s Québec.

Geneviève Zubrzycki is Associate Professor of Sociology at the University of Michigan and Director of the Weiser Center for Europe and Eurasia. She is the author of the award-winningThe Crosses of Auschwitz: Nationalism and Religion in Post-Communist Poland (University of Chicago Press, 2006) and Beheading the Saint: Nationalism, Religion and Secularism in Quebec (University of Chicago Press, 2016), and editor of National Matters: Nationalism, Culture and Materiality (forthcoming, Stanford University Press). She is now completing a third monograph on the current revival of Jewish communities in Poland and non-Jewish Poles’ interest in all things Jewish.