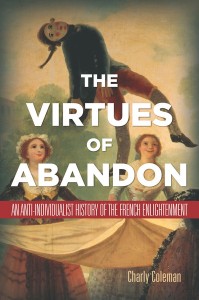 Coleman finds in Quietism the source of a significant current of self-abandonment that runs against the individualism and self-possession that characterize much Enlightenment thought. The Enlightenment is associated with the triumph of the self and, in particular, the possessive self, capable of self-ownership as well as ownership of property. And yet, some of the most prominent philosophes also expressed interest in an ideal of self-abandonment, exploring the possibilities for surrendering to a divine or political unity. This divide between possession of the self and self-abandonment shakes up the usual story of the Enlightenment as a triumph of individualism and breaks down the division of Enlightenment thought between religion and atheism. In the debate over self-ownership, Christian mystics aligned with radical materialist philosophes while mainstream philosophes aligned with orthodox theologians. It’s not just a new way of thinking about the Enlightenment; it’s also a more nuanced approach to the process of secularization and the spread of individualism. As Coleman puts it, “secularization no longer refers to a one-sided departure from religion, but rather to a contingent, multi-dimensional process that originated within religion itself.” These are formidable stakes, and Coleman’s work is an important and significant contribution to work on the Enlightenment.

The core work of Virtues is to link Quietist ideas to key Enlightenment thinkers through analyses of their works. The second part of the book traces the themes of dispossession and the “culture of self-possession” in the writings of Baruch Spinoza, Denis Diderot, and Jean-Jacques Rousseau. Spinoza and the radical materialists shared the Quietists’ goal of dispossession of the self to such an extent that their readers committed suicide in unsettling numbers. Diderot embodied the tension between the philosophe as an eminently rational, self-controlled individual and as a person seeking access to new realms of human experience, such as releasing one’s consciousness through dreaming. This tension took shape in Diderot’s Encyclopédie, magnum opus of the Enlightenment, which “unfurled a struggle for the soul of the philosophe—as either an active, wakeful, self-owning subject, or as an object under the ecstatic sway of forces beyond its control.”

The penultimate chapter, on Rousseau, picks up the themes of property and consumerism first introduced in the discussion of venal offices in the first sections of the book. Most importantly, Coleman argues that the political unity Rousseau aspired to in the Social Contract reflected a concern with dispossession of the self in favor of union with a larger spiritual whole that can be traced to Quietism and is part of a broader culture of dispossession. The final chapter of the book then identifies this current in the French Revolution. It’s a little disappointing to see Coleman reduce heterogeneous, complex revolutionary ideologies to Rousseau, having so powerfully argued against reducing the Enlightenment to a clash between religion and atheism. The culture of dispossession offers an interesting interpretation of the Revolution. But just as in the interpretations of the Enlightenment that he criticizes, a more nuanced approach to the ways the revolutionaries reinterpreted and intermixed diverse ideas would only have strengthened his analysis.

The readings of these authors are illuminating, but it’s not clear if Quietism is the source of the culture of dispossession or simply a symptom of it. This uncertainty is introduced in the first chapter, where Coleman identifies theological defenses of venality as only one of an array of justifications that also included Lockean and Cartesian arguments. Presumably the same range of responses would characterize the critique of venality, such that just as the heretical Quietists challenged orthodox theology, dissenters from John Locke and René Descartes might have formulated philosophical critiques. The same goes for the Quietist influence in key Enlightenment texts. Diderot’s Encyclopédie picks up themes and words that sound Quietist, but the relationship between reason and madness and the idea of losing one’s senses seems to spill beyond the limits of Quietism.

The anxiety over venality that Coleman identifies as a spur to Quietism was itself one element of a general concern about the noxious effects of consumer goods on mores. Quietists explicitly rejected the idea that an individual could own spiritual goods such as good works, and with it rejected the accumulation of devotional goods such as crucifixes and prayer books that were part of the explosion of consumer goods in the eighteenth century. Connecting dispossession to consumer culture suggests that Coleman sees it as having broader influence than religion alone. He argues for its influence on “the broader social, political, and intellectual landscapes of eighteenth-century France,” as well as the role of individualism in “the emergence of modern economic relations.”

The vocabulary of possession that Coleman highlights as a key point of overlap between dispossessive spiritual practice and actual ownership is intriguing, but feels generic. He highlights the way that property-related words such as jouissance and aliénation applied to emotional states, but one might wonder how they came to be associated with property in the first place. That is, jouissance and bien are abstract words that refer to enjoyment and goodness; it’s intriguing that they became so indelibly associated with property. To take this language of property and apply it back to the self seems to complete a circle. Or, put another way, given that this language of pleasure became a way of talking about property, how could theologians speak of goodness and enjoyment in a spiritual sense without evoking the relationship between an individual and his goods?

Coleman correctly highlights the significance of property across French culture and society in the eighteenth century, as new forms of property were emerging and new behaviors relating to property generated anxieties. His sensitive analysis of the language of dispossession in philosophical texts would have been well met in this context as well. It’s not that possession overall was necessarily bad, but that possession of the wrong things—goods rather than land—was thought to have a pernicious effect. Many in the eighteenth century criticized the dangerous influence of consumer goods, but the effects of real property on individuals’ identity were taken for granted. If anything, the real offense of venal offices was that by conferring new qualities on their owners, they aspired to do what land did.

The language of real property, as opposed to consumer goods, is a powerful source for ideas about the self, because it was used to describe the relationship of an individual to her rights. A broad array of authors writing on rights in the eighteenth century, including Locke and Rousseau, describe one’s ownership of one’s rights as not only inalienable but imprescriptible. Prescription is the doctrine by which an owner can lose title to a piece of land by failing to actively exercise ownership for a specified period of years. The only other property not subject to prescription in France, other than public roads, was the royal Domain. So to exercise imprescriptible rights was to be like the Sovereign, exercising a claim so permanent it was eternal. One might wonder, under these conditions, about the nature of the self that owns its rights the way the sovereign owns the royal lands. Or even, whether an individual can really be said to own her rights or whether, like the king, the individual’s body has been dissolved in a lineage that extends well before and well beyond his short existence.

The status of the culture of dispossession as a response to rampant consumerism is interesting and fruitful, but it does not get to the bottom of the tangled relationship between self-possession and property. This seems to point out all the more clearly the limits of the venality-Quietism genealogy. Quietism certainly does seem relevant to the engagement with dispossession that Coleman finds in his authors, but Quietism and the critique of venality seem more like manifestations of another, larger phenomenon as opposed to the origin point itself. Is religion central to these cultures, or is it incidental, an aspect of the significance of Catholicism in French culture at the time? It seems logical that a significant cultural form would express itself in religious terms in the context of Old Regime France, but it is less clear that religion itself is a driving force.

Much of the literature that Coleman responds to treats the culture of self-possession from the perspective of consumerism and property ownership, but Coleman turns to religion to counter it. There is certainly much to be found here, including the point that secularization is not a linear process. But there is something to be said for countering treatments of property on their own ground, particularly since proponents of self-possession themselves expressed ambivalence over the proper use of property. It is this underlying tension that keeps breaking through Coleman’s narrative—that the culture of self-possession he sets up opposite his culture of dipossession doesn’t really hang together.

All of this is to say, Coleman has given us an important, deeply engaging book. His intelligence sparkles through the text, which has clearly been meticulously crafted and edited. His identification of a countercurrent of dispossession running through the language of self-possession in the eighteenth century should draw wide notice, and his remonstrance that the Enlightenment does not break along lines of religion alone should inspire the next generation of scholarship.

Hannah Callaway is a lecturer in social studies at Harvard University. She received dual doctoral degrees from Harvard and the Institut d’Histoire de la Révolution Française at the University of Paris through a Co-tutelle Internationale de Thèse. Her research interests include the emergence of democratic property as a set of practices in revolutionary France, with particular emphasis on the interactions between law, administrators, and social actors.