The refugee crisis and religion: Beyond physical and conceptual boundaries

by Erin K. Wilson and Luca Mavelli December 1, 2016
Like
Print 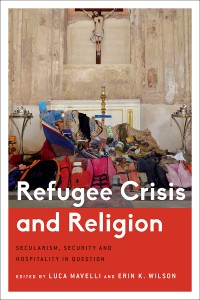 This post is a summarized version of the introduction to the edited volume The Refugee Crisis and Religion: Secularism, Security and Hospitality in Question, edited by Luca Mavelli and Erin K. Wilson (Rowman and Littlefield International, 15 December 2016). – Eds.

According to the United Nations Refugee Agency (UNHCR), as of the end of 2015, 65.3 million people were displaced globally at a rate of twenty-four persons per minute. This is the largest number on record and is expected to have grown in 2016. Despite the enormity of the situation, responses from Western countries (who host a mere 14 percent of displaced persons in comparison to the 86 percent hosted in countries surrounding conflict zones) have been inadequate, to say the least. Their harsh exclusionary rhetoric has resulted in increasingly hardline immigration policies.

Australia has led the way in this regard, deploying a deterrence-driven model of offshore mandatory indefinite detention, which prevents asylum seekers from ever settling in the country, even if found to be “genuine refugees,” and laws that make family reunion almost impossible. Whilst this approach has been condemned by the UNHCR and multiple human rights organizations, it has been highlighted by numerous policymakers in Europe as a possible model for governing migration on the continent. Despite the notable exceptions of Germany and, to a smaller extent, Italy, European responses to the crisis have privileged exclusionary and securitizing policies, leading many commentators to observe that rather than a refugee crisis, this should be more properly described as a crisis of leadership or a crisis of solidarity.

A key catalyst for these increasingly harsh immigration policies and discourses has been the question of religion, and in particular, Islam. Religion has become the primary characteristic by which refugees are imagined and understood, resulting in three main false assumptions:

1. Since the majority of refugees are from countries where Islam is the dominant religion, they must therefore be Muslim. The reality is that many refugees are Christian, Atheist, Baha’i, Druze, or Yazidi, as well as Muslim;

2. Not only are all refugees assumed to be predominantly Muslim, but they are all Muslim in the same way, ignoring the numerous variations in beliefs, rituals, and practices across understandings of what it means to be Muslim;

3. The concurrent rise of mass displacement and violent extremism (stereotypically associated with Islam) has resulted in a complicated entanglement where “refugee” equals “Muslim” and “Muslim” equals “terrorist” in public discourse and consciousness. This contributes to the belief that all refugees are potential terrorists and prompts narrow policy responses primarily concerned with security rather than solidarity and humanitarianism.

This situation has been further exacerbated by the overlapping of two good/bad discourses: good Muslim/bad Muslim and good refugee/bad refugee.

As Mahmood Mamdani observed in the aftermath of 9/11, the dominant discourse that emerged regarding Islam does not just emphasize the connection between Islam and terrorism but also urges us “to distinguish ‘good Muslims’ from ‘bad Muslims.’” Good Muslims are peaceful and law-abiding and abhor acts of violence that threaten the authority of the secular Western state. Bad Muslims commit acts of violence and, according to political leaders like George W. Bush and Tony Blair, blaspheme the name of Allah and do not adhere to the proper teachings of the Koran. While these statements could be cast as attempts to de-essentialize Islam by emphasizing that violence is not an endemic feature, this good Muslim/bad Muslim narrative has contributed to constructing good Muslims as devoid of agency, as potential victims of a growing “radicalised and politicised view of Islam” (as Tony Blair argued in 2014) whose only hopes rest on external salvation from the West.

This narrative draws on an Orientalist tradition that is also reproduced in Western approaches toward refugees. A case in point is the UK decision in September 2015 to take twenty thousand Syrian refugees over a period of five years directly from camps in Syria’s neighboring countries. As then Prime Minister David Cameron explained, the refugees would be selected on the basis of need by privileging disabled children, women who had been raped, and men who had suffered torture. In this policy, “good refugees” and “good Muslims” are women, children, and male victims of violence who patiently wait in refugee camps to be rescued by Western saviors. Conversely, “bad refugees” and “bad Muslims” are those who exercise agency by engaging in “proactive livelihood and survival strategies” (Fiddian-Qasmiyeh 2016), such as crossing sub-Saharan Africa or the Mediterranean in order to seek refuge in Europe. Bad refugees challenge the script “refugee=victim.” They become a “swarm of people coming across the Mediterranean,” as David Cameron stated earlier this year, and more generally “queue jumpers” and “bogus asylum-seekers” who are jeopardizing the protection claims made by “real” (i.e. “good”) refugees (Fiddian-Qasmiyeh 2016).

The good Muslim/bad Muslim distinction is deeply intertwined with the good refugee/bad refugee narrative because in Europe, as José Casanova has pointed out,

Immigration and Islam are almost synonymous. The overwhelming majority of immigrants in most European countries [excluding immigrants from other European countries] . . . are Muslims and the overwhelming majority of Western European Muslims are immigrants . . . This entails a superimposition of different dimensions of “otherness” that exacerbates issues of boundaries, accommodation and incorporation. The immigrant, the religious, the racial, and the socio-economic disprivileged “other” all tend to coincide.

While the majority of immigrants in the United States are not Muslim, President-elect Donald Trump’s anti-Islamic stance, including his proposal to end Muslim immigration, suggests that the “superimposition of different dimensions of ‘otherness’” described by Casanova has also been taking place in the United States.

Considered in their overlapping dimension, the good Muslim/bad Muslim and good refugee/bad refugee divides contribute to explaining the growing importance of religious identity in the politics of migration in Europe, North America, and Australia and the hierarchization of refugees according to religious-racial attributes. At the top of the hierarchy are Christian refugees, ideally victims of religious (Muslim) persecution. This is evidenced in statements from politicians in Eastern Europe, the United States, and Australia that only Christian refugees should be accepted. Next are Muslim refugees who wait patiently in camps for Western salvation and the “woman and child” or child refugees who symbolize the quintessence of vulnerability. At the bottom of this hierarchy are the “bad refugees,” mostly represented by those who escape the victim script by taking matters into their own hands, venturing to the North across dangerous and illegal routes.

This hierarchy is essential to understanding Western policy responses to the crisis, such as the suspension and scaling down of search-and-rescue operations in the Mediterranean, taking refugees directly from Syrian camps, and the European Union (EU) deal with Turkey. These initiatives have often been justified in humanitarian terms. For example, Lady Anelay, the foreign office minister of the United Kingdom, described the British termination of search-and-rescue operations in October 2014 as reducing “unintended ‘pull factors,’ that encourage more migrants to attempt the dangerous sea crossing and thereby [lead] to more tragic and unnecessary deaths.” This explanation is tenuous to say the least—refugees are fleeing for their lives regardless. Introducing harsh measures to reduce irregular migration, whilst not at the same time opening more legal pathways for greater numbers to be resettled, does little to actually prevent people dying.

The EU-Turkey deal has succeeded in closing down the shortest and safest sea voyage into Europe—from Turkey to Greece—but means that migrants are now focused on the central crossing from Libya to Italy, which is longer and far more dangerous. Already this year, as of November 25, 4690 migrants have died in the Mediterranean, according to International Organization for Migration figures. This is nearly one thousand more lives lost than in the whole of 2015, which was 3777. In other words, the deal has not stopped people trying to come to Europe; it’s merely made their journeys more life-threatening. As William Maley has forcefully observed, such policies are not about “saving lives” or preventing “unnecessary deaths.” The real message from these countries is a simple one: “Go and die somewhere else.”

What seems to have been forgotten in the dominant narratives around the refugee crisis is that, to put it simply, refugees are people. Commentaries that overly emphasize religious identity or focus predominantly on whether someone is a “genuine refugee” or an economic migrant—a distinction that is largely meaningless on the ground—willingly or unwillingly neglect the complexities that make up human beings who are currently displaced. They are not just Muslims or refugees—they are parents, children, brothers and sisters, doctors, lawyers, teachers, engineers, citizens, activists, friends. Their identities are complex and cannot be reduced to simplified categories of Muslim or refugee.

Scholars and public intellectuals must continue to stress the diverse nature of Islam, de-link Muslim, refugee, and terrorist in broader public consciousness, and remind people of the humanity of those who are currently displaced. And, we must push our politicians, policymakers, and media to do the same. We must contribute to the creation of safe spaces for difficult conversations and encounters with “others.” Most crucially, we must ensure that the advice and experiences of refugees themselves is a central component of these public conversations. Shifting focus from religious identity to solidarity with fellow human beings whose survival is at stake would be a significant step in shifting dominant discourses and attitudes to the crisis, generating greater space for alternative political and societal responses.

Erin K. Wilson is Associate Professor of Global Politics and Religion, Faculty of Theology and Religious Studies, University of Groningen, The Netherlands. Her research is positioned at the intersection of religious studies and international relations, with particular interest in the impact of secular worldviews in areas of global justice. Her books include After Secularism: Rethinking Religion in Global Politics (2012), Justice Globalism: Ideology, Crisis, Policy, with Manfred B. Steger and James Goodman (2013). and The Refugee Crisis and Religion: Secularism, Security and Hospitality in Question, coedited with Luca Mavelli (Rowman and Littlefield, 2016).