Why citizenship (still) matters in France 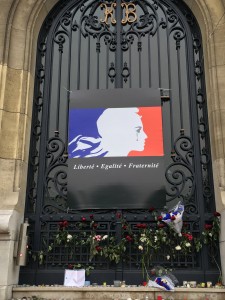 In the wake of the November 13 terrorist attack, French president François Hollande decided to reinforce France’s security legislation. In addition to a raft of police and intelligence measures, he proposed two major constitutional revisions: the first was to “constitutionalize” the state of emergency, previously an ad hoc piece of legislation; the second was to formalize the conditions under which French citizens can be stripped of their nationality.

Both of these propositions were intensely controversial. The first quite rightly evoked France’s colonial past and its long history of police violence. France has known many periods of internal strife and state abuse of power in the past two centuries—from colonial wars to foreign occupation—and those on the left of the political spectrum feared the consequences of a state of emergency raised to the status of a constitutional principle. Nevertheless, the proposal seemed to have enough cross-party support for it to be guaranteed safe passage through parliament in the coming months.

The same could not be said for the proposal to strip the nationality of French citizens who commit “crimes against the nation.” After a tight vote in the French National Assembly in early February—162 in favor, 148 against and 22 abstentions—the proposal was finally buried in mid-March when the Senate rejected the text that had been voted in the Assembly. This inability to agree on a unified text meant that Hollande would not be able to gather the 3/5ths of the votes in both houses of parliament that are required for any amendment to the French constitution.

By this stage, Hollande was visibly bruised by his long parliamentary fight and, with no end to the controversy in sight, he decided to abandon the entirety of his constitutional reform package on 30 March. Not one of his symbolic anti-terrorist reforms has survived to see the light of day.

The differences that led to this unusual French form of filibustering are important. Hollande’s initial proposal in November was that any constitutional provision for the stripping of nationality—known in French as déchéance de nationalité—should apply only to dual nationals on the grounds that no signatory to the 1951 Geneva Convention on refugees can render a person stateless.

But defenders of France’s so-called republican model—which today is the vast majority of the French political class—argued in the National Assembly that to enshrine in law the differential treatment of single nationals and dual nationals would threaten national unity and lead to unfair discrimination against dual nationals. The result was paradoxical: the attempt by parliamentarians to argue against the law on republican grounds resulted in a new version of the law that could be applied to all French citizens, thereby vastly extending its scope. It was this amended version that was voted in early February.

Not surprisingly, members of the indirectly-elected Senate raised serious questions about the new version of the text that had been voted by the National Assembly and, ultimately, chose to rewrite the text to take it back to its original version, applicable only to dual nationals. In so doing, they knew that they were all but condemning the entire project to a slow and painful death since absolute parliamentary agreement is a prerequisite for any constitutional amendment.

It is surely one of the great ironies of present-day French politics that a Senate with a right-wing majority was responsible for killing off a proposal that the center-right and far-right have defended for years. It is even more ironic that the initial proposal for the constitutionalization of the déchéance de nationalité came from a left-wing president and was passed through a National Assembly with a left-wing majority bitterly opposed to the idea.

But the interminable wrangling over a highly-symbolic constitutional amendment revealed more than simply the implosion of the left-right divide in French political life. It also said something important about the deeper structures of contemporary French politics. After all, almost everyone agreed that the proposal to strip French citizens of their nationality in the case of convicted terrorist or other assorted anti-national activities would only apply to a tiny number of people and would have a negligible effect on anti-terrorist policies. So why such a fuss—and why such public controversy over the issue?

The answer is simple: because citizenship remains one of the most contested political issues in France. Yes, the immediate impetus for Hollande’s constitutional reform proposals was the terrorist attack of November 13, but the subsequent debate had much more to do with the question of who could be a citizen and on what terms.

Historians of France have long known that citizenship is one of the defining problems of modern French political culture. During the French Revolution, the National Assembly struggled with the question of whether Jews and Protestants could be citizens; the Dreyfus Affair was, first and foremost, a struggle between an ostensibly republican and secular citizenship as opposed to a nationalist and exclusivist one; and the decision of the Vichy regime in 1940 to begin stripping citizenship from French Jews remains one of the country’s darkest moments. Indeed, the fact that the Second World War was the last time the French state had implemented a form of déchéance de nationalité was repeatedly raised in the parliamentary debates on Hollande’s proposals.

Yet despite the ubiquity of these debates in France, they are often neglected in the scholarly literature. In recent years, this has become especially apparent in academic work about secularism (laïcité) and multi-culturalism. In the context of a broad social scientific attack on secularism from scholars such as Talal Asad, Joan Scott or Saba Mahmood, the discussion of these issues has tended to focus on questions of liberal pluralism, postcolonial racism, and the allegedly hegemonic, Christian-inspired foundations of Western secularism.

Clearly, such critical engagement is crucial. The inequalities of the past inevitably weigh heavily on the ideologies of the present. Only the most blinkered analyst would deny that French secularism and multiculturalism are part of a long anti-clerical struggle with the Catholic Church and carry the traces of (post)colonial discrimination. But, equally, it is vital to remember that the vast majority of French people see these issues as subservient to a much bigger debate about citizenship.

Take, for example, the debate over laïcité that exploded on to the political scene in 1989 with the “headscarf affair,” continued through the famous legislation that banned “ostentatious religious symbols” in public schools in 2004, and preoccupies politicians and activists even today. Rather than see this solely as an example of the onward march of illiberal Islamophobia, it is more productive to see it as part of a multi-faceted reinterpretation of the foundations of citizenship in France.

When the “headscarf affair” burst on to the public scene in 1989, it was both a time of profound uncertainty on the French left as European Communism was beginning to come apart, and a period in which the French were re-evaluating their revolutionary heritage during the bicentenary celebrations of the French Revolution. Through the 1990s and 2000s, these concerns were overlaid with a deep unease about social and political fragmentation—a so-called social fracture (fracture sociale)—that seemed to threaten the very integrity of the nation-state. By the mid-2000s, there was yet another layer of debate surrounding France’s colonial past and the “responsibility” of the French state towards different postcolonial communities.

To single out the legislation of 2004—or even the headscarf debate as a whole—is therefore a mistake. The reinvention of laïcité in late twentieth-century in France was part of a much wider response to a perceived breakdown in the social and political contract of the Fifth Republic (founded in 1958). By the late 1980s, voters were no longer conforming to long-standing patterns of political allegiance; class-based politics was giving way to identity politics; and a previously booming postwar economy had become stagnant. In short, France was facing a crisis of citizenship, to which solutions were urgently required. With its historical veneer and its universal pretensions, laïcité seemed like a perfect fit.

The story is much the same when it comes to France’s vexed relationship with multiculturalism. In much of the literature about the integration of ethnic minorities in France, it is taken for granted that the country’s “colorblind” republican model has led to an outright rejection of British, Dutch or American-style multiculturalism. As if to confirm this impression, the French state forbids the collection of ethnic statistics, refuses to recognize the specific claims of ethnic minorities, and repeatedly praises the value of a French model of “integration” as a historically powerful project of national unity.

But, again, the picture is more complex than these truths allow. French republicanism does have deep roots in history, but the origins of its present configuration do not lie in the distant past; they lie in the reformulation of French political thought in the 1980s. With the atrophy of Marxism on the left and Gaullism on the right, a reinvigorated form of republicanism came to take the place of these two master ideologies of postwar France. At the same time, “integration” and “secularism,” previously neglected parts of the republican canon, were elevated to the status of foundational pillars of republicanism.

This is hardly surprising given that both integration and secularism had, by the 1990s, become instrumental discourses in the French elite’s battle to contain the emerging crisis of citizenship. The question of whether such discourses have been helpful in tackling real social problems like youth unemployment and institutional racism remains moot. But there is no denying their power: French republicanism today has become a necessary and unavoidable part of the political landscape. Far-left Trostkyist organizations fight over the contradictions between their anti-colonial heritage and their desire to conform to the rational, progressive underpinnings of French republicanism; centrist politics is dominated by republican language—to such an extent that the main center-right party has rebaptized itself Les Républicains; and the far-right now claims the mantle of “true” republican secularism in its fight against Islamic “fundamentalism.”

Given the widespread use of republican ideas and concepts in contemporary French politics, it is plainly unsatisfactory to dismiss French republicanism merely as a vehicle for racism and intolerance. It is much more than that. Republicanism is not simply an ideology, but a site of discussion, debate, denial and (sometimes violent) disagreement. Most importantly, it is the primary means by which the French talk about citizenship.

It is only right, then, that the debate over the déchéance de nationalité should have begun within a very specific context—the aftermath of the November 13 attacks—but ended in a broad discussion about the extent to which it could be made compatible with French republicanism. Just like the “problem” of Islam in France or the anger of young rioters in France’s banlieues (suburbs), the question of terrorism was ultimately drawn into (and made subservient to) the question of citizenship.

The fact that so many politicians accepted the principle of déchéance de nationalité was a sign that the rules of citizenship in France are changing. As the far-right takes ownership of republicanism, we can expect a further hardening of republican principles and an increasingly obsessive focus on Islam. But the collapse of Hollande’s constitutional reform project was a reminder that even the French president cannot ignore the problem of citizenship—and that even his political opponents would rather maintain the status quo than violate the cherished principles of French republicanism.

Emile Chabal is a Chancellor’s Fellow in History at the University of Edinburgh. He has published widely on postwar French political history, including A Divided Republic: nation, state and citizenship in contemporary France (Cambridge, 2015), France since the 1970s: history, politics and memory in an age of uncertainty (Bloomsbury, 2014), and articles on postcolonial identity politics in the south of France and Franco-British relations.