A View from the Margins of the Banlieue 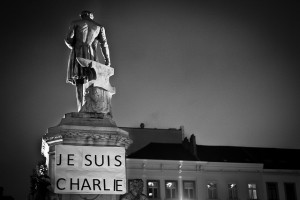 What light does the experience of Salafi Muslim women shed on satire mocking Islam and Muslims?

New Directions in the Study of Prayer grantee Z. Fareen Parvez takes up this question in her recent article on the place of female Muslim piety in contemporary France. Parvez, who worked with Salafi Muslim women in Lyon, contends that religious worship and community are particularly meaningful for women whose “status as French citizens remains precarious.” Nineteenth-century Catholicism, which was the topic of political satire back then, was the religion of a privileged class. Islam in France is not. These observations on discrimination against Muslim minorities problematizes the use of satire and the solidarity expressed after the attack on the satirical magazine Charlie Hebdo:

[T]he implications of the slogan “je suis Charlie” are not as straightforward as they are made to appear. To say “je suis Charlie” is not only to denounce the killings and express one’s sympathy with the victims and their societies. It is not only to show one’s support for protected speech and the use of satire. Rather, it simultaneously has the effect of dismissing and invalidating the persistent reality of aggression, harassment, and political and economic exclusions that have been plaguing French Muslims, especially women among the unemployed working-class. Furthermore, it ignores the history of satire and perverts its logic by prodding and provoking those without social power—those who are excluded from public space and denied various dignities of citizenship.