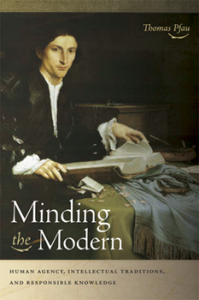 In his new book Minding the Modern, Thomas Pfau presents a searching, and often scathing, indictment of the modern regime of personhood, which he regards as not only irredeemably soulless, but also endlessly self-deluding. In Pfau’s view, to approach personhood in terms of historical regime already amounts to a capitulation, since doing so reproduces and thus extends the fragmentation to which it unwittingly gives rise. In a curious manner, Pfau shows himself willing to echo Michel Foucault’s pronouncement in The Order of Things of the impending demise of man—at least insofar as moderns have engaged in a systematic effort to estrange themselves from logos, “the manifestation of the abiding framework within which alone meanings of any kind are to be prima facie achieved” (162). Yet this tragic tale also allows for a glimmer of hope: the resurrection of the dead is possible, if only the truth of unlikely prophets—including, in Pfau’s account, Samuel Taylor Coleridge—would inspire deeper reverence.

Minding the Modern is a work of stunning audacity, undertaken on a justifiably grand scale. Pfau’s vast erudition and capacity for patient, painstaking exposition will no doubt leave many readers in awe. Others might take issue with his disavowal of historical method as typically practiced—which he associates with a kind of willful amnesia that characterizes the modern condition—in favor of an intimate, highly charged hermeneutics. The impassioned quest for transcendence—laudable in itself while also opening necessary critical distance—potentially imperils Pfau’s project. If modernity succeeds in obfuscating its own origins and the indispensability of the eternal ends to the degree that his argument seems to require, it soon becomes difficult, if not impossible, to account for the possibility of his own intervention. What is more, his efforts to recover the long-forgotten truths of the Christian-Platonist past lead him to distort the nature and outcome of subsequent intellectual traditions. This tendency is writ large in Pfau’s treatment of the Enlightenment—a diverse and multifaceted movement that he, on the testimony of Georg Wilhelm Friedrich Hegel, Max Horkheimer, and Theodor W. Adorno, somewhat ironically reduces to the triumph of the possessive self and its cult of instrumental reason.

Pfau couples the learned zeal of Brad Gregory’s The Unintended Reformation with the ethereal circumspection of Charles Taylor’s A Secular Age. Indeed, his narrative largely follows a similar arc. Here, modernity owes its existence in part to the theological and metaphysical fallout of medieval nominalism, which set the stage for the progressive disaggregation of will and reason, fact and value, present and past, humanity and divinity. In sharp contrast, classical and early Christian thought grounded mental activity in “embodied vision and purposive action” (85). Even Augustine’s prior ruminations on the will as corrupt and inherently divided—departing somewhat from Taylor’s argument for the rise of the “punctual” self—remain bound to necessary grace. Thomas Aquinas, the nominalists’ most visible target, went even further in orienting the person and its faculties toward an “overall hierarchy of ends” (144). Reason thus possesses a transcendent content, in which the mind consciously and willfully participates not merely on the basis of logical demonstration, but also of faith. This interpretation reflects a deeply held epistemological commitment, which Pfau does not hesitate to express in pointed terms: “Any rational system of thought requires the presence of at least one proposition that fits into it but does not follow from its axioms, that can neither be proved nor disproved” (157-158). As Pfau notes, this claim resonates with arguments made by Taylor and others, that all knowledge inevitably takes form within moral frameworks, whether recognized or not.

Pfau openly acknowledges that there will be readers who simply cannot bring themselves to believe. When persuasion proves impossible, a prolonged demonstration of his personal conviction must suffice. He is somewhat less forthcoming, however, in his efforts to neutralize the evidence that skeptics might reasonably mobilize in their defense. For instance, should it give one pause that Plato’s Republic advocates eugenics as well as the contemplation of the Forms, or that both Aristotle and Aquinas, despite their commitment to fulfilling the promise of human personhood, also justify slavery for those found incapable of doing so? More generally, Pfau at times obscures the extent to which the thinkers in question were themselves confronted by terribly fraught political, theological, and even moral conundrums driven by religiously inspired violence, from the Diocletianic Persecution to the Thirty Years’ War.

Thomas Hobbes, from Pfau’s perspective, should not be approached first and foremost as a political theorist engaged in desperate reflections on how the intellectual formalism of Aristotelian categories might have conditioned the brutal theologico-political conflicts of the English Civil War. He is rather the founder of a “political hedonism” that leaves the person a mindless agent at the mercy of the fickle power of the Leviathan, which Pfau presents, not unlike Michael Gillespie, as the secular successor to the nominalists’ absolute and absolutely unpredictable God. As for Locke, his efforts to avoid a Hobbesian solution to the problem of political and religious obligation are not spared chastisement for their “de facto abandonment of the ancient notion of logos capable of integrating scientific knowledge and human experience” (227). In the face of this offense, it hardly seems to matter that the author of Essay Concerning Human Understanding, the Two Treatises of Government, and the Letter Concerning Toleration also attempted to fix personal identity with explicit reference to moral accountability, and that he did so with concrete ends in mind—from promoting the peaceful coexistence of rival Protestant sects to establishing the limits of authority in the wake of the Exclusion Crisis and James II’s subsequent ouster.

Pfau locates the emergence of modernity in two seminal moments—the nominalist revolution of the fourteenth century sets the stage for the rise of Enlightenment naturalism. The Reformation, at least in terms of coverage, gets off relatively lightly. According to Pfau, eighteenth-century thought generalized what had previously been a vanguard position, thereby entrenching the “Great Divide” [italics in original] that sequesters virtue from cognition, and self from substance (308). Henceforth, consciousness devolves into the mere “possession (dominium) of the world by framing it as a sum total of objects either demonstrably captured qua ‘facts’ or as yet awaiting to be thus secured,” with an attending “loss of synderesis, of judgment, and of a temporal dimension of personhood, as well as the disappearance of an articulate conception of the good” (310, 323). Following Hegel, Pfau prefaces these charges with a still more damning statement about the nature of the movement: “Blind to any possible mediation of the intelligible with the foreign, the Enlightenment thus rejects and pathologizes per definitionem (i.e., as sheer superstition or as illegitimate, threatening otherness) all those phenomena that resist integration into value-neutral, conceptual idealities” (25).

These characterizations follow from established critiques of the Enlightenment as an intellectual and political project, while eschewing more recent scholarship that, on the basis of careful scrutiny of the textual evidence, has called into question the premises behind them. It is as though Pfau must conjure an Enlightenment of the most frightful proportions in order to dramatize the struggle of Coleridge and other champions of logos against its devastating effects. If, as a host of historians have argued, the Enlightenment was in no way the monolith that this vision requires—if, on the contrary, it encompassed a broad range of metaphysical positions and national variations, including those that could be reconciled with religious thought and deep moral sources—then Pfau’s effective history of the modern mind loses a corresponding measure of its analytical force. David Sorkin, to cite but one prominent example, has identified a pan-European religious Enlightenment championed by the likes of William Warburton in Britain, Jacob Vernet in Geneva, and Adrien Lamourette in France. Other scholars have examined in considerable detail the influence exerted by the hermetic tradition on Enlightenment philosophy and science—from Isaac Newton’s intense engagement with the alchemical tradition, to the allure of vitalism in physics and medicine, to the spellbinding popularity of Franz Mesmer in the 1780s.

Not even a figure of Denis Diderot’s stature could fit readily into Pfau’s disenchanting tableau. In a series of writings, from his contributions to the Encyclopédie to Le Rêve de d’Alembert, the philosophe cast profound doubt over the legitimacy of self-possession, in language derived partly from heretical strains of mystic theology and joined to a materialist interpretation of the dream state that rendered it a means of communing with nature as an immanent, totalizing, even resacralized force. Although a far cry from Coleridge’s musings on divine personhood, Diderot’s thought experiments depended on neither one-dimensional accounts of autonomy nor on an unfounded faith in pure reason.

Minding the Modern performs the laudable of task of inducing humanists of all stripes to plumb the depths of their intellectual, moral, and even spiritual commitments. Yet it does so in a manner that potentially forecloses upon rather than sustains meaningful dialogue across disciplinary fields and intellectual traditions. Framing the project as Pfau does leaves him with a perhaps superhuman burden—that of persuading readers not only that his method is sound, but also that his pronouncements on the nature of personhood and will stem from an incontrovertible source. After all, one cannot talk back to logos.

Charly Coleman is an assistant professor of history at Columbia University. His first book, The Virtues of Abandon: An Anti-Individualist History of the French Enlightenment, was published this year by Stanford University Press. He is currently at work on a project that explores the emergence and impact of competing economic theologies in eighteenth-century France.