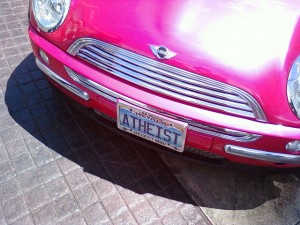 Starting last week, atheists and nonbelievers everywhere now have a new station to add to their television lineup: Atheist TV. The channel, available online and through the Roku streaming service, is a project of American Atheists, an organization that dedicates itself to “fighting for the civil liberties of atheists and the total, absolute separation of government and religion.”

The organization’s president, David Silverman, has big dreams for the little channel, which he hopes will “provide a breadth of content, from science to politics to comedy, all centered around our common freedom from religion.”

As the New York Times reports, at a party celebrating Atheist TV’s launch, Mr. Silverman focused particular ire on Discovery Communications. The company has produced shows such as “Finding Bigfoot” on Animal Planet and the History Channel’s miniseries “The Bible.”

The channel, Mr. Silverman said in the first streamed broadcast, will have no psychics, no ghost hunters, no “science fiction presented as science fact,” and will be “a place we can call our own, where we can speak the truth as frankly as we want.” It intends, he said, “to promote the idea that religion can and should be criticized.” … “The TV networks kowtow to the liars who make money off of misinformation,” he said, singling out for special contempt outlets that mix silly supernatural gunk with more serious science and nature shows.

“The Discovery Channel treats ghosts like they’re real,” he said, adding later, “Bigfoot, psychics, aliens, ghosts, spirits, gods, devils — all bunk, all pushed by the so-called truthful and scientific stations in an effort to placate the waning religion segment at the expense of the growing segment of atheists who should be, but are not, their target audience.”

To counter, as they see it, this kind of content, Atheist TV currently hosts interviews with prominent atheists, footage from atheist meetings and conventions, and broadcasts of long-running cable show “Atheist Viewpoint.” As it is currently funded solely by donations, its content is limited. However, Silverman hopes Atheist TV will eventually host original programming, and he’s brought Liz Bronstein—a veteran TV producer who also happens to be a veteran of Discovery Communications—aboard.

As the BBC reports, atheists and nonbelievers in the US and Canada face high rates of discrimination, especially in comparison to other minority groups.

A recent poll conducted by the Pew Research Centre shows Americans would rather have a president who was either in their 70s, or openly gay, or who had never held any public office than one that was atheist.

One of Atheist TV’s new phone-in programmes, The Atheist Experience, has already had a taste of how many Americans perceive “non-believers”.

“So you were studying to be a minister, and now you don’t believe in God? You’re the devil,” one caller tells the host. “You’re a Marxist, you’re an atheist and you’re from Russia,” says another. …

The new TV channel is part of atheist groups’ own civil rights movement. But real acceptance, particularly for those serving in public office, in a country where no serving congressman or woman is openly atheist, could still be some way off.

Read more about Atheist TV via the American Atheists’ website.