The religious dimension of Morsi’s mandate 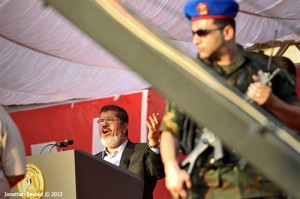 There are competing conceptions of legitimacy between the Islamist administration of Morsi and the majority of the Egyptian people who associate legitimacy with substantive democracy. In Morsi’s understanding, his democratic legitimacy is the result of a formal procedure of elections and can only be (legitimately) undone if he breaks the religious contract that enhances his leadership. As such, Morsi had steadily and publicly garnered the image of a true Islamist leader throughout his one-year tenure. He has billed himself as a just Muslim who fears Allah in public, enforces public morality, and therefore deserves and expects to be judged on these grounds. Although not stated, this self-postulated religious leadership as basis for legitimacy was as much imagined as concrete.  Throughout the rich and intense debate that ended up with his ousting from power, the religious dimension of his mandate was at the forefront of the argument.