Where are the women priests? 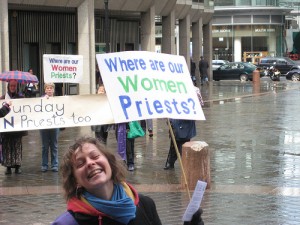 Much of the conversation surrounding the new military laws suggests that “not much will change on the ground because women are already doing combat jobs.” What will change here are the legal laws that will prevent women from receiving promotions because they didn’t serve an “official combat tour of duty.” Similarly, women are not ordained in the Catholic Church, another long standing officially male-only profession,

Though two different groups, St. Joan’s International Alliance and Women’s Ordination Conference, have been arguing in favor of a “renewed Church,” so far efforts have been rebuffed. What Hunt calls for is an acknowledgement from the Church that despite its laws and official practices, many women are already putting in the work of clergywomen, only without gaining the recognition, much like their sisters in the military. She states:

Like women in combat, non-ordained people do what needs to be done pastorally and argue the details later. This is how social change happens. Laws are made and changed in response to already existing situations, not to fantasies….Women priests already exist through ordination processes that parallel the official one, and plenty of Catholic women minister in their own ways.

You can read the full essay here.