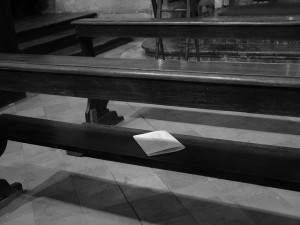 New Directions in the Study of Prayer Grantee Elizabeth Drescher responds to a new report, “‘Nones’ On the Rise,” released by the Pew Forum on Religion & Public Life in affiliation with PBS’ Religion & Ethics NewsWeekly:

But do such data really tell us much about American religiosity—about religion as it is lived in the United States today? A number of what I would see as problems in the Pew report suggest to me that our growing fixation with religion-by-the-numbers may be distracting us from richer, more nuanced understandings of American religious practice.

Take the demographic category of “Nones” itself. The Pew report notes the difficulty with survey questions which ask respondents to define their religious outlook in negative terms—“no religion,” “no religion in particular,” “none.” Such options, especially as they are used in demographic reporting, suggest that respondents are not in any way religious, that they do not have religious beliefs and do not engage in religious practices. We know that this is clearly not the case—that many Nones are believers of one sort or another, that they do engage in a range of religious or spiritual practices. Because of this, the researchers have preferred the term “religiously unaffiliated” to the more popularly used “None.”

But this terminology, too, is problematic, as it focuses on a particular, institutional, belief-based mode of spiritual association that reveals itself, as well, in the survey’s questions on community-seeking. Nones, the report states, “attach much less importance to belonging to a community of people with shared values and beliefs; 28% of the unaffiliated say this is very important to them, compared with 49% percent of all adults.” (Emphasis added.)

Does this mean that Nones eschew spiritual community? My own research for a forthcoming book on the spiritual lives of Religious Nones suggests otherwise.

Read the full piece at Religion Dispatches. Learn more about the SSRC’s New Directions in the Study of Prayer program and Drescher’s project “Praying Between the Lines: The Prayer Practices of Religious Nones” here.