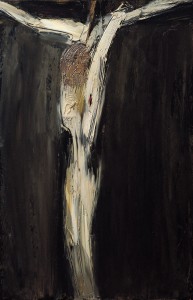 Where on earth to begin with the rich but deeply disturbing material presented to us on BishopAccountability.org? (For an example, see the documents relating to the Province of St. Barbara.) How to confront the archive’s huge volume but also the extent of its moral charge?

I also have a number of questions about what we are, or should be, looking at—the proper boundaries of the object of our inquiry.

Is this a particularly American phenomenon? After all, clerical sexual abuse has been reported in many parts of the world, even if nation-wide inquiries have been instituted in just a few places, such as the U.S. and Ireland. And is this an exclusively Christian (or even Catholic) phenomenon? In fact, a Chicago Tribune story from 2011 reported the laxity of control over Buddhist monks who engage in sexual abuse in the U.S., though interestingly the tenor of the story implies that the problem was the lack of central control of such priests, whereas in the cases we’re looking at here there are clear problems with the center itself.

But can we even say that this is an exclusively or an especially religious phenomenon and be sure that the levels of abuse we’ve witnessed in the archive greatly exceed those in society at large? That last question has to be asked, even if the answer seems likely to be in the affirmative.

A more historical question relates to the framing and trajectory of the issue in the archive itself and whether, for instance, we can discern a shift away from an exclusively spiritual framing of behavior by church officials towards one where both legal and psychiatric languages are being brought in, if sometimes also conspicuously ignored.

Thinking about the archive in terms of the history of Christianity prompts another question for me. I wonder about the extent to which invoking history suggests both causality and context. In other words, does locating these sexual acts in the context of the history of Christianity or Catholicism either explain them or explain them away? The answer to both of these questions should, I think, be “no,” but we still need to look for patterns and shifts in the trajectories of opinion or activity that we might deem to be significant. In what follows, I use different histories to show how they inflect my readings of the archives, though I do not attempt to connect these four historical fragments in a systematic way.

My first fragment is one that I’ve derived both from my reading of the BishopAccountability.org materials and from a posting I remember from Katherine Ewing to The Immanent Frame on the subject of religion, spirituality, and sexual scandal. Ewing refers to the scandals around the Catholic Church but also to those relating to Independent Baptists and Muslims, noting that we are currently seeing a number of different religious institutions being rocked by such sexual episodes of accusation and outrage. This focus on the current situation invokes the need for historical consciousness: we need to be aware of how the scandals of today might, as Ewing implies, “articulate the sexual ‘orthodoxies’ of modern secularism and its discursive operations by locating specific structures of sexual desire, activity, and prohibition (such as the religious functionary who has sex with underage members of the church)….beyond the secular pale,” in other words highlighting acts that are considered “unthinkable for the liberal, secular subject.” Perhaps the scandalous, so defined, is dependent on certain definitions of childhood, of the legitimacy of the nuclear family, and of a modern sexual politics where spirituality marks an interior terrain parallel to and linked with sexuality—with both being seen as immanent sources of self within the liberal agentive subject. This is not for one instance to deny that Catholic conservatives might themselves be outraged by what has happened, but it is to point to wider and, to some degree, more historically specific dimensions of the character of current outrage and scandal.

My second fragment is also recent but is more specific. As an anthropologist of evangelical Christianity as well as of varieties of Catholicism, I find it difficult to avoid reading these accusations and counter-accusations through the frame of the scandals amongst U.S. televangelicals of the 1980s and 1990s. To some degree, there are parallels—homosexuality features prominently in both forms of embodied submission and exchange, as do understandings of the power of sacred touch. In both cases, unsurprisingly, we see initial institutional attempts at concealment. But there are also some significant differences. Pedophilia does not feature particularly in televangelical discourses of the scandalous, for instance. Also significant is the way in which respective institutional discursive resources redefine and refine the scandal in the longer term. The Catholic archives tell a story of chronic, serial concealment and neutralization of morally reprehensible behavior through the creation of discursive disconnections, legal blockages, and so on. The rhetorical apparatus remains precisely private and in-house—or intra ecclesiam—as far as possible. But evangelical scandals often develop along a very different rhetorical and moral trajectory, eventually becoming grist to an evangelical mill of publicity and redemption for the perpetrator. Susan Harding remarks insightfully that scandals became part of the cultural instability that is an integral and productive force in American Protestant evangelical preaching, whereby preachers narrate and act out strategic indeterminacies—gaps, excesses, anomalies, breaches—that their followers harmonize and critics intensify. Such publicization and democratization of sin seems utterly different to that which we see in these archives.

My third fragment is one I find harder to use as a frame in reading the archival material, and yet it’s surely relevant. It emerges out of my ethnographic and archival work on the Marian pilgrimage site of Walsingham in England. Walsingham is hardly alone in the Roman or Anglo-Catholic world in being a site where, from the medieval period to the present, we see morally and politically charged action carried out in relation to changing geographical and political landscapes but also—at the same time—to shifting ideas of the body, sexuality, gender, and family. Throughout the last century in particular Walsingham has encompassed battles between sites of celibacy, sexual repression, and explicit forms of mostly, but not exclusively, homosexual identity that, according to Dominic Janes, have combined to allow Walsingham to be imagined precisely as a space of queer desire—where the notion of queerness both includes and exceeds its sexual connotation. Of course, queerness must not be conflated with pedophilia, even as it mediates at Walsingham between the potent and the “merely” picturesque. There’s also the problem of how to avoid anachronisms in looking at the serial sexualization of such a Catholic site over the longue durée. But perhaps more relevant here is the fragile boundary between orthodoxy and transgression that we see at a site such as Walsingham and in the BishopAccountability.org archives. The question becomes: Does a religious context combining touch, co-presence, incarnation, hierarchical authority, and compartmentalization of spaces of action lend itself to catalyzing certain forms of sexual activity? Again, causalities cannot be asserted, but we should at least ask whether the kinds of sexual contacts we see in these archives form an unofficial and yet patterned form of what Webb Keane sees as a semiotic ideology, a coming together of words, objects, and bodies—in particular configurations that constitute and define different religious groups and their worlds. Sexual actions in this sense are both transgressive and somehow resonant of a religious world, constituting its semiotic make-up in patterned though not determined ways.

In a roughly similar semiotic vein, I would also invoke a historian of Walsingham, Susan Signe Morrison, who has written fascinatingly of how the figure of Ophelia in Hamlet, created not so many decades after the Reformation and the destruction of much of Walsingham, can be shown to exist as a trace of the Virgin of the pre-Reformation shrine: profaned, laid waste, destroyed. Ophelia becomes detritus through rhetorical and dramatic idioms of trash and sexualization. In turn, thinking of how some priests engage with and then drop their sexual prey, I confess that images of the making of waste, the creation and then discarding of matter and memories seen as out of place in relation to the institution of the church, kept coming to my mind as I perused the archive.

My final fragment is both historical and ethnographic, and it’s one that is, I suppose, a typical knee-jerk reaction from an anthropologist to this kind of material. The history of anthropology and Christianity is riven with questions of how to deal with witchcraft but also with witchcraft accusations—with the epistemologies as well as the social and institutional arrangements behind episodes, moral dramas of allegation, accountability, and resolution. Much could be said about this, but I’ll confine myself to just two points, leaping off from how the material we’re looking at compares with the type of witchcraft accusations described by E. E. Evans-Pritchard.

Evans-Pritchard stresses that accusations among the Azande, if they are to become socially and culturally salient, should take place among broad equals, often rivals. The cases we’ve been looking at raise complex questions concerning the very lack of equality—in relation to the respective ages of victim and accused, status within the church, perhaps also class. But we also see two institutional systems of determining status combining and clashing: that of the church and its sense of spiritual hierarchy and that of secular human rights, where equality before the law is more likely to be asserted. Secondly, Evans-Pritchard makes an epistemological point: the Azande do not allow individual cases where their system of explanation and accountability seems to fail to actually challenge their assumption that the system itself is to be relied upon. What strikes me about the archives is the way we see episodes of abuse leading us in two rather different moral, religious, and perhaps epistemological directions. On the one hand, episodes of abuse find lay victims losing faith in both the church and its system of accountability; on the other hand, following episodes of abuse many of the priests involved seem to gain in their faith in the system.

What these four fragments have in common are not only worries over how we make comparisons but also the conviction that a focus on the Catholic Church alone is not enough; not if we want to understand both the particularities and the banalities of its construction and response to abuse.

Simon Coleman is Chancellor Jackman Professor at the Department for the Study of Religion, University of Toronto, and immediate past-president of the Society for the Anthropology of Religion, American Anthropological Association. His research interests include Pentecostalism, pilgrimage, cathedrals, and the construction of religious infrastructure, and he has conducted fieldwork in Sweden, England, and Nigeria. He is coeditor of the journal Religion and Society: Advances in Research.