Loss of faith in religious institutions 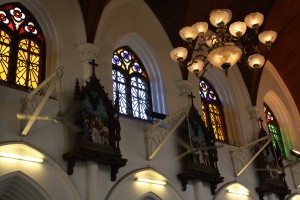 NPR recently reported on a Gallup poll, which showed Americans’ faith in organized religion and religious institutions has declined. According to this poll, only 44% of Americans have a great deal of confidence in organized religions and institutions. However, this does not mean faith in God is in decline. According to NPR religious corespondent, Barbara Bradley Hagerty, polls show that approximately 90% of Americans believe in God. Hagerty explains:

“Although among young people, belief in God is declining,” Hagerty tells weekends on All Things Considered host Guy Raz. “But generally polls show that about 90 percent of Americans actually believe in God. So what’s happening here is a decline in the trust of religious organizations.”

People just don’t want to go to church as much as they used to, Hagerty says, and the societal pressures to go aren’t there anymore.

Hagerty says one type of religious institution in America that is growing is the nondenominational Christian churches, whose membership has tripled in the last 20 years. She says marketing, a more relaxed atmosphere and a notion that you can have a “personal relationship with God” all contribute to the growth of these institutions.

“That’s transcendent, that’s transformative,” she says. “Because of that, they seem to give meaning and purpose to people’s lives. It draws people in.”

Pastor Greg Surratt founded Seacoast Church in Mount Pleasant, S.C., nearly 25 years ago. It started with only 65 members but has grown to about 12,000 worshippers and is widely seen as one of the most influential nondenominational evangelical churches in America.

Despite the Gallup poll, Surratt says he doesn’t think religion and people living their lives according to what Jesus would teach will go away. But he does say it will change.