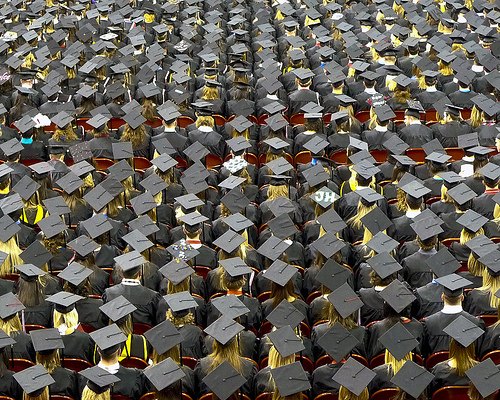 The graduation wars have begun. As thousands of students at Catholic colleges and universities prepare to celebrate their graduation and take their degrees, their campuses are embroiled in controversy over who should and should not be permitted to speak at graduation and, in some cases, receive an honorary degree.

I am of two minds about these wars. On the one hand, as I suggested last week, Catholic institutions of higher learning must not be pushed into a kind of intellectual ghetto by the Torquemada-like fanatics at the inaptly named Cardinal Newman Society. Catholic colleges and universities should not be afraid to engage the culture and listen to anyone who has something to say on their campus. What are we afraid of? That a single appearance by an errant Catholic or a controversial non-Catholic will rob our students of their commitment to the faith? If so, we are not doing a very good job of inculcating that faith in the first place. More importantly, whenever the Church has built a wall around its institutions to keep the forces of the ambient culture out, the procedure has failed. The CNS folk can build walls as high as they like and still at the end of a graduation ceremony, and indeed at the end of every Mass, we are sent out into that world beyond. The urge to censor begins in a humane instinct, the desire to protect those we love from influences that might harm them, but it cannot always and everywhere trump another humane instinct, the desire to explore and engage, least of all at a college campus. A ghettoized university is no university at all.

On the other hand, I rather like the fact that we have these debates about the Catholic identity of our colleges and universities (and hospitals and social service providers). Harvard’s motto was once “Pro Christo et Ecclesiae” – for Christ and His Church – but having become a hotbed of Unitarianism and than rationalism, the motto was switched to the more anodyne “Veritas” in the latter half of the nineteenth century. Other great colleges and universities in America find, in the center of their campuses, over-large and under-used chapels – think Princeton, Yale, Wake Forest, Wesleyan – as a testimony to their former religious sensibilities and current lack of such sensibilities. James Tunstead Butchaell’s magisterial (in both senses) book The Dying of the Light catalogues how religious universities lost their religious identity over time and it makes for some grim reading. It is important, even vital, that we Catholics not let that happen to our institutions and so the debate about Catholic identity is a welcome one: we heard last Sunday about the need to prune in order to grow. Between the coarse censoriousness of CNS and the blithe indifferentism of the Ivys, we must find our way forward.