The Vatican and the “war on women religious” 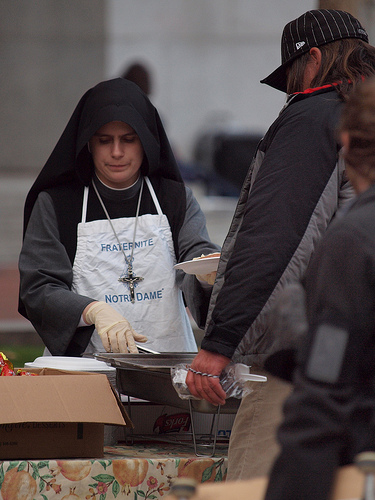 The recent Vatican report on the Leadership Council of Women Religious (LCWR), an umbrella organization representing roughly eighty percent of American sisters, has elicited a fierce reaction in the media from Catholics and non-Catholics alike. Citing “serious doctrinal problems,” the eight-page report issued by the Congregation for the Doctrine of the Faith (CDF)—the body that oversees questions of doctrinal orthodoxy in the Church—effectively placed the LCWR into receivership and appointed Archbishop Peter Sartain of Seattle to oversee the process of reforming the organization.

In particular, the organization stands accused of promoting “certain radical feminist themes incompatible with the Catholic faith” as well as “policies of corporate dissent” aimed at Church teaching on female ordination and homosexuality. In part, then, this is a classic tug-of-war over the extent of theological divergence or discussion permissible within the Church. While the LCWR claims never to have questioned any Church teaching “‘when it has been declared as authoritative,’” the report extends the demands of religious submission to matters “not limited to defined dogmas.”

But there is more to the report than this. It goes on to assert:

…while there has been a great deal of work on the part of LCWR promoting issues of social justice in harmony with the Church’s social doctrine, it is silent on the right to life from conception to natural death, a question that is part of the lively public debate about abortion and euthanasia in the United States. Further, issues of crucial importance to the life of Church and society, such as the Church’s Biblical view of family life and human sexuality, are not part of the LCWR agenda in a way that promotes Church teaching. Moreover, occasional public statements by the LCWR that disagree with or challenge positions taken by the Bishops, who are the Church’s authentic teachers of faith and morals, are not compatible with its purpose.

Many have interpreted this last sentence as a reference to the widespread support amongst women religious for President Barack Obama’s public healthcare plan, whereas the Bishops publicly opposed the plan over questions of abortion and contraception coverage. Whether or not this is an accurate interpretation of the statement, it does signal a clear prioritization of questions of sexuality, abortion, and contraception—which are also dear to many conservatives in the U.S.—over questions of social justice more often associated with a liberal political agenda.

Large numbers of Catholics have expressed their outrage over the report and their support for the nuns, but what is more surprising is the extent and fervor of the secular media response. At the New York Times, Maureen Dowd denounces the document as the latest episode in an ongoing “war on women” currently dominating American political discourse, while Nicholas Kristof praises the selfless work of countless nuns on behalf of the poor and provocatively suggests that “if you look at who has more closely emulated Jesus’ life, Pope Benedict or your average nun, it’s the nun hands down.” Not surprisingly, the case has been widely interpreted through the lens of the ongoing sexual abuse scandal in the Church, against which the Vatican’s criticism of nuns looks, at best, unfair and, at worst, downright hypocritical. Indeed, questions have even been raised about the record on sexual abuse of the very bishops charged with reforming the LCWR.

The Catholic media response has also overwhelmingly favored the nuns, although it tends to be less sensationalistic and tempered by a deeper understanding of the structures and history of the Church. John Allen at the National Catholic Reporter suggests that a significant divergence exists between the hardliners in the CDF responsible for the report, and the Vatican office in charge of overseeing the religious orders. The editors at Commonweal instead use the incident to mount a penetrating critique of sexism within the Church, while criticizing the Bishops for confusing “disagreement about public policy with doctrinal dissent.” But there are also Catholics who defend the actions of the CDF, such as conservative activist George Weigel, who goes so far as to blame the “greying” of female religious orders in the U.S. on an overly liberal interpretation of their vows.

More than just a “war on women” or a simple right-left split, the report likely heralds a larger Vatican reaction against the perceived American tendency towards “à la carte” Catholicism—a selectiveness that frequently operates at the expense of Church teaching on questions of contraception, abortion, and sexuality. Doctrinal and political concerns are evidently deeply entangled within this problem and will likely continue to be so as the Vatican proceeds with its project to reform American Catholic life.

Sarah Shortall is assistant professor of history at the University of Notre Dame. She is the author of Soldiers of God in a Secular World: The Politics of Catholic Theology in Twentieth-Century France (forthcoming, Harvard University Press) and the coeditor of a volume of essays titled Christianity and Human Rights Reconsidered (Cambridge University Press, 2020). In addition to these projects, her work has appeared in Past & Present, Modern Intellectual History, the Journal of the History of Ideas, Boston Review, and Commonweal.