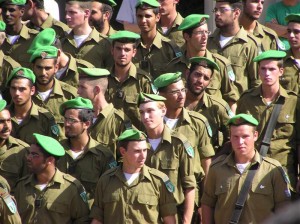 Today at The New York Times, Laurie Goodstein reports on the United Methodist Church’s decision not to divest from companies that supply Israel with equipment used to enforce its control in the occupied Palestinian territories. The decision, which was settled by vote, came after months of lobbying by American Jews, Israelis, and Palestinian Christians. The delegates ultimately passed a resolution “calling for ‘positive’ investment to encourage economic development in ‘Palestine.'” They also passed a “strongly worded resolution denouncing the Israeli occupation and the settlements, and calling for ‘all nations to prohibit the import of products made by companies in Israeli settlements on Palestinian land.'” Goodstein notes that the question of divestment is not a new one, and that various Protestant churches have been debating the issue for years:

The divestment question has come up repeatedly over the years in mainline Protestant churches, which have long cultivated relationships with Palestinian Christians and regularly send delegations to Israel and the occupied territories. These denominations support hospitals, schools and charities in the territories.

The presiding bishop of the Episcopal Church, the Rev. Katharine Jefferts Schori, recently came out against divestment and boycotts, and instead urged Episcopalians to invest in development projects in the West Bank and Gaza.

The Evangelical Lutheran Church in America, the nation’s largest Lutheran denomination, rejected divestment in 2007 and 2011.