What is the aesthetic of contemporary spirituality? 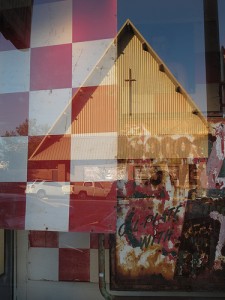 At Religion in American History, Michael J. Altman takes a broad look at Frequencies, citing his appreciation of individual posts, comparing the site to indie music, and musing on alternative visual choices that would alter the impact and meaning of the content.

What is this aesthetic wavelength we’ve tuned into? What do all these resonances mean? (All due respect to John Corrigan’s “meaninglessness”.) I think they point to two things. First, these resonances point to the cultural location of Frequencies within the American middle brow–that space of public radio, iPads, indie rock, the Atlantic, and SXSW… Meanwhile, the aesthetics of the site and the inclusion of these objects alongside others like Eugene Peterson or Chick-Fila lift these “lower” objects up as spiritual and middle brow.

In Frequencies, Altman sees modern design blended with contemporary aesthetic sensibilities and eclectic content, pointing to the blending of high- and low-brow culture that is so often cited as the hallmark of the last 20 years of global culture, all the while managing to avoid the term “post-modern.” He concludes with the following point:

Frequencies smartly digests, analyzes, and catalogs hipster culture and in the process produces some of  best pieces of hipster culture. It slides back and forth from critiquing the culture and situating itself within the culture. Likewise, Frequencies is more than a genealogy of spirituality, it is a prime example of spirituality, down to the aesthetics of the flickering pixels on the screen. It just looks like spirituality.

Read the full piece at Religion in American History and a series of reflections on Frequencies here at The Immanent Frame.