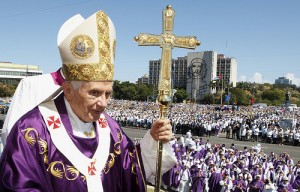 Last week at The New Republic, Carlos Eire reviewed the Pope’s recent visit to Cuba. Professor of history and religious studies at Yale University, Eire comments on the different PR policies of the current pope, Benedict XVI, and his predecessor, John Paul II, and how he feels Pope Benedict XVI may not have gotten off on the right foot.

John Paul took more international trips as a diplomat than any of his predecessors combined. He “traveled the world expressly to meet with world leaders and secular rulers, freely speaking his mind with them, and sometimes erring on the side of bluntness.”

In contrast, though he has engaged with world affairs, from the start of his papacy, Benedict XVI has largely ignored issues related to the social and political teachings of the Church.

When visiting Cuba, “one of the most repressed nations in the world,” the pope “focused his diplomacy on ensuring the Catholic Church’s growth, even when it requires keeping silent about flagrant abuses of human rights”. Moreover:

His leadership of the Church has been informed by concerns that are simultaneously more pragmatic and more idealistic than those of his predecessor…Benedict XVI is chiefly interested in fortifying the institutions of the Church so that it can withstand a modern era that may be hostile to it; in terms of idealism, he truly believes that the rites, sacraments, and spiritual teachings of the Church are themselves capable of making the world a better place.

Complete text of the article can be found here.