Neuroscience and free will 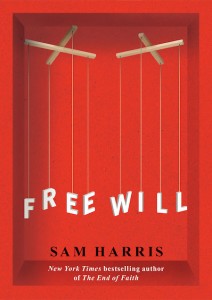 Last month, The Chronicle of Higher Education posted a series of articles discussing “what science can and cannot tell us about free will.” A collection of professors from various fields tackle an age-old question, do we make our own decisions, or does something else decide for us? The articles were written in the context of a number of recent publications that take up the issue of neuroscience and free will, including Sam Harris’s Free Will, Michael S. Gazzaniga’s Who’s In Charge? Free Will and the Science of the Brain, and David Eagleman’s Incognito: The Secret Lives of the Brain.

For centuries, the idea that we are the authors of our own actions, beliefs, and desires has remained central to our sense of self. We choose whom to love, what thoughts to think, which impulses to resist. Or do we?

Neuroscience suggests something else. We are biochemical puppets, swayed by forces beyond our conscious control. So says Sam Harris, author of the new book, Free Will (Simon & Schuster), a broadside against the notion that we are in control of our own thoughts and actions. Harris’s polemic arrives on the heels of Michael S. Gazzaniga’s Who’s In Charge? Free Will and the Science of the Brain (HarperCollins), and David Eagleman’s Incognito: The Secret Lives of the Brain(Pantheon), both provocative forays into a debate that has in recent months spilled out onto op-ed and magazine pages, and countless blogs.

What’s at stake? Just about everything: morality, law, religion, our understanding of accountability and personal accomplishment, even what it means to be human. Harris predicts that a declaration by the scientific community that free will is an illusion would set off “a culture war far more belligerent than the one that has been waged on the subject of evolution.”

Included in the discussion is a piece written by Paul Bloom, SSRC New Directions in the Study of Prayer Advisory Committee member.

Read the individual articles and learn more about the discussion as a whole here.