Archbishop of Canterbury to step down 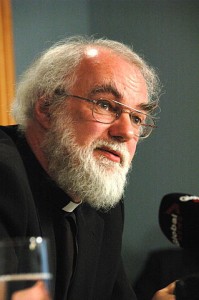 On March 16th, Archbishop Rowan Williams announced his acceptance of the position of Master of Magdalene College, Cambridge, effective January 2013. Enthroned in 2003, he will continue to carry out all the duties and responsibilities of the Archbishop of Canterbury until the end of the year. In his official announcement, Dr. Williams said that:

It has been an immense privilege to serve as Archbishop of Canterbury over the past decade, and moving on has not been an easy decision.  During the time remaining there is much to do, and I ask your prayers and support in this period and beyond.  I am abidingly grateful to all those friends and colleagues who have so generously supported Jane and myself in these years, and all the many diverse parishes and communities in the Church of England and the wider Anglican Communion that have brought vision, hope and excitement to my own ministry.  I look forward, with that same support and inspiration, to continuing to serve the Church’s mission and witness as best I can in the years ahead.

Having presided over a divisive decade as head of the Church of England and the wider Anglican Communion, he will return to the world of academia, where he spent many earlier years. Writing for Reuters, Avril Ormsby writes of his turbulent tenure:

Unlike Roman Catholicism, Anglicanism is a loose grouping of churches whose head has no direct power over all members.

Considered a liberal when he became archbishop in 2002, he constantly sacrificed his private beliefs to maintain the unity of the Church.

But the poet and linguist increasingly struck a forlorn figure, suffering a series of blows to his personal authority by the unyielding factions.

The only Welshman to hold such office, he failed to deliver on what liberals wanted while also falling short of traditionalist demands.

Over at The Economist, the magazine acknowledges his difficult balancing act and his efforts to promote unity within the Communion:

Knowing his literary and intellectual gifts, many friends of the archbishop will breathe a quiet sigh of relief at the news that, after an exhausting decade, he is to lay down an almost unbearable burden. His job has involved holding together the fractious forces of England’s state church and the wider Anglican Communion—while trying to convince a sceptical nation, looking for guidance through economic crisis and simmering cultural conflict, that Anglicanism does not begin and end with quarrels over sex and sexual orientation.

The fact that neither the home church nor the Communion has simply split down the middle, at least so far, is a tribute to his unusual mixture of qualities. Doctrinally conservative but personally sensitive and humane, he has been able to empathise with all the contending factions in the church’s battles over touchstone issues.

For more on the Archbishop of Canterbury, click here.