Responses to Qur’an burning in Afghanistan 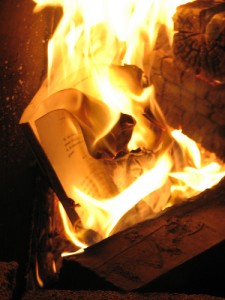 Reports that NATO personnel had burned copies of the Qur’an first appeared in the New York Times on Tuesday, February 21. Since then, there have been several days of protest, leading to the deaths of both Afghans and American soldiers, despite an apology from President Obama. Alissa Rubin places the event in the context of building tensions and the importance of religion in an article for the New York Times:

Afghan officials quoted from a letter from President Obama in which he, among other things, apologized for the Koran burning. For President Hamid Karzai, the episode has fast become a political thicket. He and other government officials share with the Afghan populace a visceral disgust for the way American soldiers treated the holy book, but they recognize that violent protests could draw lethal responses from the police or soldiers, setting off a cycle of violence.

Complicating matters is that some of Mr. Karzai’s allies in Parliament and elsewhere, including former mujahedeen leaders, have openly encouraged people to take to the streets and attack NATO forces. Mr. Karzai has not spoken out against them publicly, but his government’s overall message on Thursday suggested that he did not want more violence.

In an OnFaith opinion piece, Muqtedar Khan points out that incidents like this have happened all too frequently, and argues that apologies are insufficient:

American military leaders are apologizing, again. The world’s most moral and most advanced military has repeatedly shown an alarming lack of discipline—putting American troops and Afghans at risk with another provocative act. In 2005, it was revealed that military members were desecrating the Koran as part of their harsh interrogation tactics at Guantanamo. Earlier this year, we found out that a group of Marines videotaped themselves urinating on corpses of Taliban in Afghanistan. And this week, we learn of the “accidental incineration by U.S. military personnel of copies of the Islamic holy book.” Muslims revere the Koran more than anything else in this world; we do not even touch it without being ritually pure. Destroying the text is the ultimate act of disrespect to the faithful.

How could this sort of callousness happen, again?

If the U.S. military took these incidents seriously they would have had a policy in place to prevent just such an accident, including training on Islamic culture to teach incoming military personnel how to behave decently and respectfully towards people of other faiths. Since acts like the Koran burning, even when unintended, have huge implications for Muslim-American relations around the world, this training should be of the upmost priority.

For another perspective, we can look to Remi Hajjar—an American soldier and Ph.D. candidate in sociology. In an interview with the LA Times, Hajjar urges us not to overlook the “sea change” that has taken place over the last 10 years in the military’s transition to cultural sensitivity:

But despite the military’s solid efforts in building cross-cultural competence over this period of time, we’re talking about millions of human beings. There are going to be isolated cases of mistakes. I don’t think they’re reflective of the institution as a whole. I hope it doesn’t overshadow the genuine strides we’ve made in trying to help Afghans.

At this point, I hope our military asks Karzai and asks some of the critical leaders in Afghanistan what they suggest, what can we do? That could be a very nuanced sort of approach. The answer they might get in Kabul could vary greatly from a remote village in eastern or southern Afghanistan.

On behalf of NATO, General John R. Allen, Commander of the International Security Assistance Force and US troops in Afghanistan, apologized in a video for the unintentional burning, attributing it to an error and promising to include Afghan officials in his investigation of the event. NATO itself has not made a press release on their website, other than to confirm this investigation. For his part, president Hamid Karzai has urged calm from Afghans, while affirming that citizens have the right to protest peacefully. More details on the controversy should emerge soon.