Is there a global ethic? 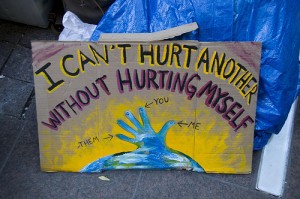 It snowed on Saturday throughout the American Northeast. Six weeks ahead of the official start of winter, it snowed on the hundreds of protesters camped out in lower Manhattan who have, for the past month and a half, given voice to growing popular anger over the state of our economic system.

It seemed particularly apt, then, that Gordon Brown highlighted the challenges of climate change, economic inequality, and financial instability when he argued, Monday morning at NYU, for a new global “sentiment,” or ethic, to confront these three problems, which he termed the emerging crises of the age of globalization. These problems, he said, are shared, common, problems that, when they affect one part of the globe, also affect the whole. Since their scope is global, so too must be their solution. Is there anything, Brown asked, stronger than a protectionist or nationalist sentiment that can guide our interconnected future? Is there a global sentiment? And if so, what role might religion have in forming that sentiment? The former British prime minister’s comments served to introduce Jonathan Sacks, Chief Rabbi of the United Hebrew Congregations of the Commonwealth and the keynote speaker of the third installment in a series of lectures sponsored by the NYU Dialogues on the Global Civil Society.

To explore the possibilities for a universal moral sense, the Chief Rabbi took us back to 1831, to the discoveries of two nineteenth-century figures—Charles Darwin and Alexis de Tocqueville—who had traveled to the Americas to study rather different topics and yet, according to Sacks, had discovered a similar finding: the human experience requires a constant balance between competition and cooperation—between aggression and altruism. From Darwin’s studies, Sacks explained that we learn the following: the assumptions of natural selection, followed to their logical conclusion, where only the most fit survive, would require ruthless selfishness if not for the fact that groups as a whole can only survive if at least some of their members are altruistic. In natural selection, there is a tension between self interest and selflessness and, Sacks said, a resulting paradox whereby “selfish genes produce selfless people.” Meanwhile, Tocqueville confronted a similar paradox in Antebellum America. In a country where religion was disestablished, sapped of the most direct route to political power, Tocqueville, expecting religion to face extinction, instead observed and reported its robust presence in American life. Where he expected religion, due to its competitive disadvantage, to wither away, it instead thrived. To Sacks, this phenomenon reflects clearly Darwin’s conclusion that sheer competitive advantage is not necessarily determinative of success: there is something that exists in human nature that draws us to competition’s opposite—to cooperation, to altruism—and allows that opposite to flourish.

Why, Sacks asked, has religion persisted—not just in the United States, but throughout the world—even when it has not been propped up by establishment? Because, he continued, it is a source (though not the sole source) of our altruism. With its ethics of respect, justice, compassion, and love, religion holds the potential to project a prophetic voice, speaking difficult truth to unyielding powers. And through ritual, sacred texts, and a community of believers, it inspires the “habits of the heart” that today, in the face of the global challenges highlighted by Gordon Brown, foster a truly democratic citizenship. “Where there are scarce goods, where there are zero sum games, there will be competition,” explained Sacks. As opposed to the political and economic spheres, the sphere of civil society, where religion lives, is where we learn to cooperate and where the social goods necessary to a liberal democracy are formed. Religion, Sacks said, is “historically our single-most important source of renewal.”

A universal moral sense, if it is to exist, must start with altruism. In the face of the financial crises and economic inequalities that mark our present, the Chief Rabbi maintained that the regulatory agencies alone cannot foster the morality necessary to control the worst impulses of the market: regulatory agencies cannot rid the world of sin. It is the prophetic voice of religion, which—at its best and, through history, with notable exceptions—stands outside of the political and economic fray, that is positioned to right our system when it runs off the rails and inject a sense of altruism into our dealings. Finding our way back to altruism and fostering an ethic of cooperation is, Sacks concluded, “the great collective effort of our time.”

Indeed, prophetic religion may well have an important role to play as we confront the devastating fallout of what has become an increasingly unchecked and unhinged capitalism and face the possibility of a future in which economic instability might be righted in a profound way. But thinking back to our snowed-in protesters, it seems that the prophetic voice may not need to be religious. Critics of the Occupy Wall Street movement blast the protesters for their “lack of vision,” their supposed inability to say what they want, to list their demands. But isn’t speaking truth—highlighting the overwhelming economic inequality that exists in this country—in the face of powerful forces that would prefer to maintain the status quo the essence of vision? Of being a visionary? Of charting a course? Of starting to right a wrong? Religious altruism exists and is powerful, and Chief Rabbi Sacks defended it eloquently on Monday. But prophesy may exist in several forms and its potency need not rest on religious pillars of truth. In the plural and globalizing world that Gordon Brown described in his introductory remarks, seeking a common ground amongst the religious and non-religious prophets of our day may be the most useful step forward in our search for a global ethic.