RFP: New Directions in the Study of Prayer 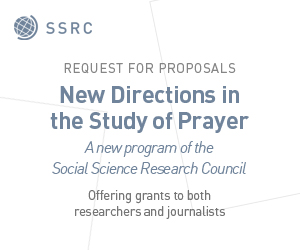 The Social Science Research Council recently announced the launch of a new project and grants program entitled “New Directions in the Study of Prayer.” The program is supported by funding from the John Templeton Foundation and was developed in conjunction with the SSRC’s program on Religion and the Public Sphere. It will be led by a multi-disciplinary advisory committee, chaired by Courtney Bender of Columbia University.

This project seeks to generate innovative research on practices of prayer and to foster the development of an interdisciplinary network of scholars engaged in the study of prayer. The project invites proposals from scholars in all disciplines for studies that will enhance knowledge of the social, cultural, psychological, and cognitive dimensions of prayer, and of its origins, variations, and correlations in human life. Approximately twenty to twenty-five grants, ranging from $50,000 to $200,000, each with a duration of two years, will be awarded to researchers, and a smaller number of grants, of up to $50,000 each, will be awarded to journalists seeking to initiate new projects on prayer.

Proposals engaging one of the following four research themes will be considered: Prayer, Virtues, and Human Flourishing; Prayer in Social and Institutional Contexts; Comparative Perspectives; and Cognitive and Psychological Perspectives.

Separate and detailed requests for proposals from researchers and journalists have been issued.

The deadline for letters of intent is December 1, 2011.

Learn more about the project here. Explore the project’s research themes here. For regular updates, follow the Religion and the Public Sphere program on both Facebook and twitter.