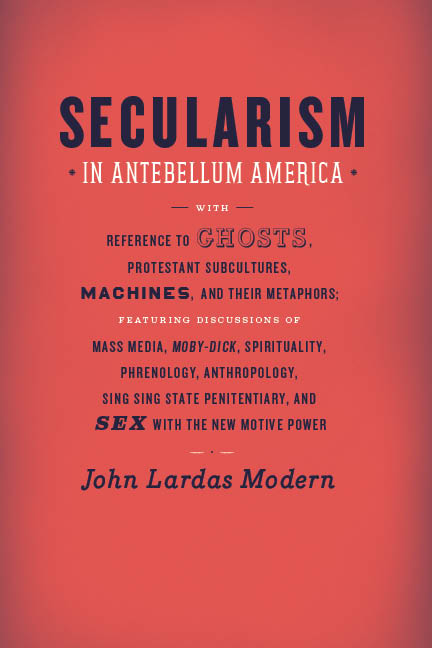 Forthcoming from the University of Chicago Press, a “pioneering account of religion and society in nineteenth-century America” by John Lardas Modern, contributing editor at The Immanent Frame and co-curator (with Kathryn Lofton) of the recently launched Frequencies.

“Modern has done something very important in this smart, generous, and beautifully written book. He has shown why and how evangelicals, liberals, and spiritualists, perennial actors on the American religious stage, actors who are often viewed as competitors, even enemies, inhabit the same secular space, now and in the past, and share responsibility for the peculiar and powerful formation that is American religion and politics. We learn how they have together created the taken-for-granted immediacy of ‘true religion’ out of Scottish common sense philosophy and faith in technology, systematicity, and progress, all through a bewildering amount of surveillance, self-culture, and media production. We both recognize and gasp at the strange but always energetic feats of our forbearers and the dangerous circularity of their never-ending networks and feedback loops.”

“Secularism in Antebellum America transforms our understanding of evangelicalism in the nineteenth century through its meticulous documentation of ideas and lives as well as through its pointed critical commentary on the last thirty years of evangelical history. Imaginative and rewarding, this is an exemplary instance of interdisciplinary historical inquiry. A brilliant, groundbreaking book.”

“Reading Secularism in Antebellum America brings pleasure on many levels, not least in the knowledge that in our age of sound bites, tweets, and branding there remain books this intellectually satisfying and meticulously made. Modern’s commanding, often inspired analyses of penitentiary reform, the primitivist strain in American anthropology, and the beginnings of our preoccupation with spirituality are deft and elegantly rendered. This subtle, substantial, venturesome book raises the stakes for all of us who read and write about American religion.”