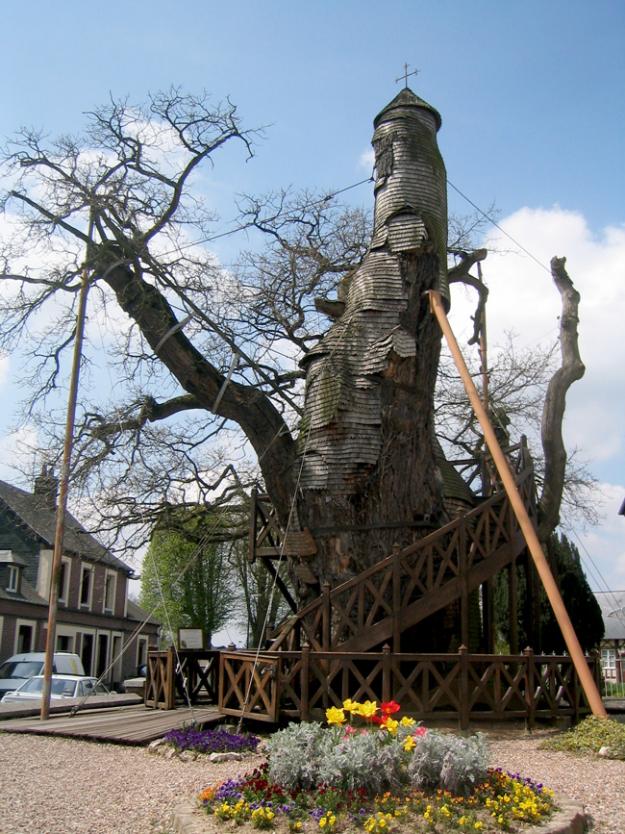 Locals will also tell you that the tree is more than 1,000 years old. A sapling during the reign of Charlemagne, by 1035 it was already venerated—in the year that William the Conqueror would become Duke of Normandy, he prayed at its base, according to lore. Scientists will contest that the oak isn’t quite as ancient, but their estimated 800 years still qualifies Chêne Chapelle as one of the oldest trees in the country. Either way, in the past several centuries, it’s become one of France’s most famous trees, and the only one to gather a congregation within its exalted bark.

The chapels were built in 1696, when lightening burned through the tree. Two pious locals—the Abbot du Detroit, and father Du Cerceau—regarded the hollowed trunk as a potential new sort of sanctuary to the Virgin Mary. They built a small alter space, which they would call Notre Dame de la Paix (Our Lady of Peace). Then, an exterior spiral staircase and a second small chapel was added. This was the Chambre de l’Ermite (the Hermit’s Room).

Thus established as a symbol of clerical power, the oak literally fell under fire during the French Revolution. In 1793, a insurgent crowd threatened to torch the tree in the name of a new republic and church. Again, a villager swept in and updated the oak tree’s image, renaming it the “temple of reason” (a sacrosanct epithet during the Enlightenment). A plaque was hung, and the mob retreated.