Ducking the Arab Spring in Morocco 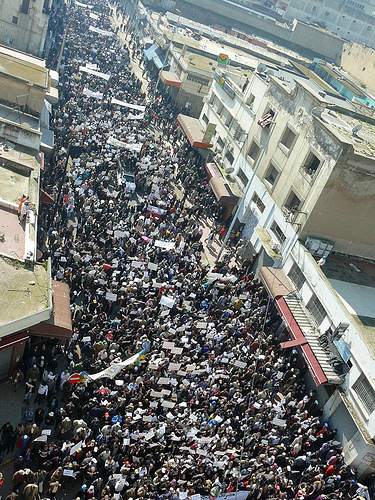 The wave of protests shaking the Arab political regimes has quietly but forcefully made its way to Morocco. The February 20 youth movement—made up of a loose coalition of independent groups, backed by liberal, leftist, labor, and Islamist opposition movements—is leading the call for democratic change. Since February it has organized two mass demonstrations across fifty major cities and towns, drawing several hundred thousands of protesters. Social and political protests in Morocco are not new, nor do they yet threaten the survival of the regime. But the revolutionary spirit and mass appeal of the movement signal a major shift in popular attitudes regarding the monarchy’s monopoly and abuses of power.

Independently of civil society, political parties, and the traditional opposition groups, the movement gained momentum and quickly positioned itself as the only force capable of pressuring the monarchy for change. Like its counterparts in Egypt and Tunisia, the Moroccan movement is ideologically diverse and politically heterogeneous. But its members and supporters agree on five basic demands: the dissolution of the current parliament and government; the release of all political prisoners; the formation of an independent transitional government to prepare for new elections; a new constitution that limits the king’s prerogatives and asserts the division of powers; and judicial proceedings to investigate known cases of high corruption and human rights violations.

On March 9, the king responded by proposing limited constitutional reforms, to be elaborated by a consultative commission whose members were selected by the palace. Such a response is characteristic of the autocratic regime’s refusal to admit the political nature of the challenge they are facing. Instead, they turn the focus to social and governance challenges. For example, since street protests began in February, the government has held a series of roundtable discussions with trade unions and has made significant concessions, including salary increases, retirement benefits, and health insurance for workers. On a parallel track, the government revived measures to fight administrative corruption, cut red tape, and clean up the justice system.

Although the Moroccan monarchy has historically enjoyed legitimacy and allowed for some degree of political pluralism, it is not at all clear that the regime will be able to navigate the new challenge any better than the now deposed regimes in Tunisia or Egypt were. The regime’s legitimacy isn’t as secure with the younger generations, and claims of “pluralism” ring hollow after decades of social hardship, lack of political participation, and abuses of power. Morocco’s social problems are as bad as Egypt’s and certainly worse than Tunisia’s. The series of Arab Human Development Reports published between 2002 and 2009 show Morocco lagging behind most Arab countries (the exception being Yemen) in many important areas. Morocco’s electoral politics and party system exemplify everything that is wrong with Arab political regimes: corruption, repression, and lack of popular legitimacy. Popular participation in Moroccan elections has declined from about 65% in the 1960s to less than 25% in the last legislative elections (2007). Lastly, Morocco’s governance problems are hardly different from Egypt’s or Tunisia’s. During the last ten years, successive Transparency International and European Community reports have listed Morocco as one of the most corrupt countries in the Arab world. Like in Tunisia and Egypt, the ruling royal family and its close associates control the lion’s share of the economy. Hence, despite relative openness on the surface, Morocco’s structural problems are as severe, and in some respects worse, than those of other Arab countries.

What distinguishes the Moroccan regime from other “liberalized autocracies” in the region is its manipulation of the concept of “good governance.” Since coming to the throne in 1999, King Mohamed VI has insisted that Morocco’s main problems are managerial, not political, and can therefore be corrected through “good governance.”  In this case, the concept of good governance is an emphatically “technical” term that refers to policing, oversight, transparency, and accountability measures that aim to improve institutional processes, capacities, and performance with minimal interference with the regime’s political foundation. The World Bank, Western donors, and International NGOs have bankrolled this strategy. With the exception of the widely applauded family code reforms introduced in 2004, all of the king’s reform initiatives thus far have been based on the tendentious supposition that what Moroccans want most is “good governance,” not democratic government. Hence, a multitude of royal consultative councils, commissions, and committees are established in every vital sphere of social, political, and economic life to “rectify” the shortcomings of formal governmental institutions and, by the same token, to extend royal prerogative into every element of daily life. In the religious sphere, for example, the Moroccan monarch, who also holds the religious title “Commander of the Faithful,” launched several initiatives since 2003 to turn back the tide of radical Islamist contestation and violence. He established a royal commission to reform the shari’a-based family code, granting women more civil rights than they had hitherto been accorded. Another royal initiative was the establishment of a special graduate program to train women as spiritual guides. Religious programs on public radio and television were overhauled to project the image of a traditional Sunni, and specifically Moroccan, Islam. But, again, rather than to clarify the relationship between the religious and the political and to foster religious pluralism and toleration, the royal initiatives were intended to improve the government’s “management” of the religious sphere and to reinforce the monarchy’s religious preeminence.

But these opaque, unaccountable royal institutions haven’t performed any better than the government. The endemic problems of corruption, ineffective government, and abuses of power that most anger ordinary Moroccans have, rather, worsened over the years.

The monarchy’s treatment of Morocco’s social and political crisis as merely a problem of “bad governance,” however, has served an important political purpose. It has allowed the king and his close associates to shift public discourse from a debate over the absolute nature of royal power to a technocratic discussion about the need to manage Morocco as if it were a big firm. The market model has become the political model, and the political discourse has become dominated by clichés about the poor preferences of Moroccan voters, the managerial inaptitude of political parties, the corruption of elected bodies, and the inability of local and national government to respond to the needs of entrepreneurs. With few exceptions, the most important social and political actors have bought into the “good governance” argument and, with it, the model of the firm, but it remains the monarchy that lays down the architecture of governance and appoints senior officials to manage it, and the results have been catastrophic for Morocco’s political and economic development.

The upshot has been the extravagant accumulation of wealth by the king and his associates, alongside increasing corruption throughout the country. Such is the irony of governance reform: ostensibly targeting corruption, it has become a vehicle for both securing and obscuring the elite’s control over political and economic life. During the last decade, successive national and international reports have shown that corruption in Morocco has reached “endemic” proportions, i.e., that it permeates every aspect of life: politics, business, the central administration, local government, public services, and the judicial system. Even before WikiLeaks revealed American worries about the royal circle’s encroachment on the economic sphere, Transparency International’s Global Corruption Report (2007) highlighted the connection between royal powers and corruption in the Moroccan justice system. One section of the report examines how the king’s presidency over the Supreme Council of Magistrates, Morocco’s highest judicial body, undermines the administration of justice. As head of that body, the king appoints all judges and prosecutors and nominates the head of the Ministry of Justice, which is considered a sovereign, royal domain. And this is particularly problematic, as a prosecution of corruption involving public funds cannot proceed without a written order of the Minister of Justice.

A concrete example of this astonishing conflict of interest was the judicial mishandling of the embezzlement of billions of U.S. dollars from public funds by senior officials. Another problem is the impotence of the government auditing office, the Inspection Generale de Finances (IGF), when it comes to probing embezzlement by individuals closely associated with the monarchy. Investigations of a half-dozen gross financial frauds involving Morocco’s top public companies in banking, social security, transports, agricultural credits, public housing, and international aid projects did not lead to the prosecution of the chief culprits. While the press widely reported on these “financial scandals,” auditing and special judicial procedures led nowhere, as the Palace clearly wanted to move on and “wipe the slate clean” for a new beginning.

In 2008, Transparency Maroc’s annual press report summarized Morocco’s lack of progress in fighting corruption under the heading “Morocco 2008: More Corruption, Less Transparency!” The report documents continuing cases of corruption in the judiciary, the public service sector, banking, and real estate. The same year, the European Commission issued a harsh report on widespread corruption and nepotism and the lack of transparency in Morocco’s public service sector. In sum, despite the verbal royal commitment to reforms and “good governance,” there has been no progress in the major problems that average Moroccans care about. It is indeed difficult to take seriously the royal avowal of “good governance” when the current Minister of Justice is also the king’s personal business lawyer.

Morocco’s misuse of “good governance” to duck serious political reforms may not be unique. But Mohamed VI took the concept to a new level to deepen the monarchy’s encroachment on the economic sector with the backing of international donors and the blessing of Western allies. In the name of “good governance,” the monarchy at once legitimated the plundering of the country and froze debate on the absolute nature of power in Morocco. While Western allies, especially France and the U.S., hailed the king’s constitutional reform proposal as revolutionary, Moroccans are skeptical about the ability, or the willingness, of the monarchy to pursue serious political reforms.

During mass demonstrations between March and May 2011, protesters rejected the king’s royal commission for constitutional reforms; called for the dismissal of the cabinet and the king’s political, economic, and security advisers; and dismissed recent government initiatives and promises to launch inquiries into corruption, human rights abuses, and dysfunction in the justice system. The traditional political elites, mainstream political parties, and nationalist leaders have little or no influence over the direction of the protest movement. In sum, the old technocratic approach to serious political challenges seems to have run its course. It would be extremely difficult for Morocco to duck popular pressures to undertake genuine political and social reforms that will require putting great limits on the powers of the monarchy.

Not long ago, Arab regimes denied democracy to their citizens in the name of social development and modernization. Morocco’s “good government” movement is a ruse that effectively serves the same purpose. The February 20 movement has rejected the royal offer for token reforms and kept up street pressure. In doing so, it has begun to expose the anti-democratic politics behind the regime’s self-fashioned reformist image.

Abdeslam Maghraoui is Associate Professor of the Practice of Political Science and Core Faculty in the Duke Islamic Studies Center, Duke University. He is the author of Liberalism without Democracy: Nationhood and Citizenship in Egypt, 1922-1939 (Duke University Press, 2006) and is currently working on a study of competing Muslim conceptions of violence, morality, ethics, and authority in the context of Morocco.