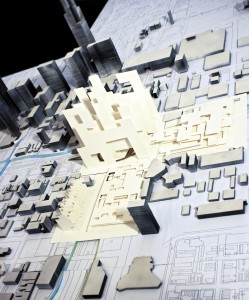 Pilgrims immediately flooded the City of Chicago when Oprah Winfrey left this earth on Her 120th birthday. Millions of global devotees knew Her as The Oprah, and the institutional complex that She left behind became a holy city. After The Oprah Winfrey Show ended, in 2011, She decided not to move west, since California’s bankruptcy had made the establishment of a new media empire in Los Angeles seem increasingly implausible.

As fate would have it, the simultaneous financial crisis in Illinois provided the opportunity She would need to stay there. State and federal budget cuts had brought Chicago’s public infrastructure to a near standstill. Sensing an opportunity, Ms. Winfrey proposed that in exchange for an unprecedented injection of capital, She would receive development rights to certain sites in the Central Area. Former Mayor Daley and the newly elected Mayor Emanuel agreed to be Her brokers with the Illinois legislature and the Obama administration. By the time the deal was done, Ms. Winfrey had acquired perpetual leases on several acres over I-290, the Circle Interchange, and the Kennedy Expressway. 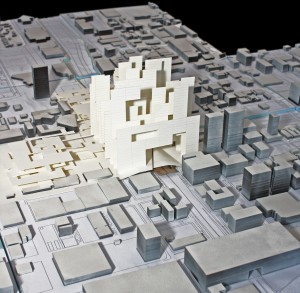 No one could have anticipated the great developments that followed. By the time Oprah Media (OM) became fully operational, in ten short years, Ms. Winfrey’s expanding wealth had driven Her notorious benevolence to even greater heights. In 2020 She offered to pay off the mortgage debt of any private property owner in the Central Area if they gave up their rights to sell. Not surprisingly, most of the wealthy declined, but the vast majority of middle-class home and business owners willingly accepted, since their property values had remained stagnant for over a decade. She also built new housing blocks for the poor. Impeccable management and family development programs insured that most families only stayed for a few years, thus erasing any comparisons to the public housing that had once plagued Chicago. And by accepting these gifts, the poor and middle classes all effectively became Ms. Winfrey’s subjects, with neither willingness nor ability to separate their fates from Hers. 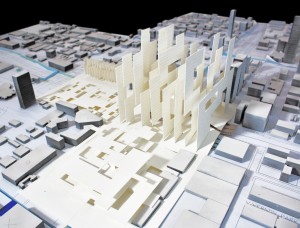 The schools were next. Her endowment of the University of Illinois at Chicago made college nearly free to all citizens of the state for the foreseeable future. UIC was renamed the Chicago Free University. Ms. Winfrey also built what by all measures was the world’s largest charter school—with a place for every child within the city limits. She guaranteed total equality of education for everyone. All families, rich and poor, sent their children, since Her school surpassed even the best private academies. This earned Ms. Winfrey the nickname, “Mother of Us All.” Her investments had a dramatic effect on the urban economy in just a few years time. The number of skilled employees began to multiply exponentially, as Chicago Free University expanded its enrollment and people from around the world were attracted to the prosperity and culture of wellness that She created. Ms. Winfrey’s empire grew as they grew, and the Central Area became Her company town.

The architect Daniel Burnham’s dream of the White City was rebuilt on the foundations of Ms. Winfrey’s stewardship. After Her hostile takeover of Google in 2025, the OM library over the Circle Interchange became the undisputed center of global knowledge and communication. The archive and its sister institutions renewed Chicago as a center of enlightenment on the level of Vatican City or Mecca. And thus The Oprah ascended from Icon to Guru to Prophet, by building a Radiant City of benevolence and power.

Marshall Brown is an Assistant Professor at the IIT College of Architecture where he teaches architecture and urban design. He was a 2010 MacDowell Fellow, and is also currently teaching as the first Saarinen Architecture Fellow at the Cranbrook Academy of Art. Professor Brown received his Masters degrees in Architecture and Urban Design from Harvard University where he won the Druker Fellowship for urban design. In 2004 he founded the Yards Development WorkShop, a studio that set out to hi-jack Bruce Ratner and Frank Gehry’s Atlantic Yards project in Brooklyn. The WorkShop has been covered in Architectural Record and the New York Daily News along with Brown’s recent essay “Back to the Garden: The Ecological Evolution of the Atlantic Yards,” from the compendium New Directions in Sustainable Design (Routledge, 2010). Brown recently completed a pictorial essay titled “Mashup City” soon to be published by “The Believer” and is working on a scenario plan that envisions the center of Chicago as a center of the world.