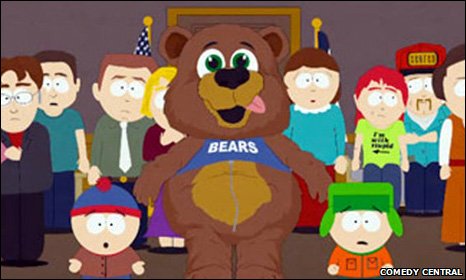 South Park, long known for lambasting religious groups and celebrities alike (Scientology, thus, being one of the producers’ favorite targets), made some news recently, when it made the portrayal of the Prophet Muhammad the central theme of its 200th episode. The episode deliberately blurred the lines of what is understood by “representation” or “depiction” of the Prophet, a question that has been especially touchy in the wake of the Danish cartoon incident. After the episode aired, a post on the web site RevolutionMuslim.com stated that Matt Parker and Trey Stone, the show’s creators and producers, would “end up like Theo van Gogh,” the Dutch filmmaker who was killed by an extremist because of his film on the treatment of women in Islamic societies. Comedy Central responded—or overreacted, according to some, including Parker and Stone—by censoring parts of the episode, including some in which Muhammad was not even explicitly referenced.

The series of events has set off a maelstrom of responses across the Web. Many fans of the show saw the episode as an extremely clever commentary on the sensitive subject of Muhammad’s depiction. Others have criticized it  for making fun of Islam. More interestingly, there has developed a thread of debate around Comedy Central’s response to the threats made on RevolutionMuslim.com. Ross Douthat, the conservative columnist at the New York Times, has framed the issue as one of free speech, lamenting the West’s “cowering before the threat of Islamist violence.” A more thoughtful response comes from  media scholar Jeffery Sconce, of Northwestern University (whose book Haunted Media is highly recommended by the author of this post). He breaks down the disingenuous nature of the free speech argument, as well as the implicit politics of modernity enfolded therein. Striking a Habermasian tone, he writes:

Everyone is entitled to his or her opinion as long as they also subscribe to modernity’s highest precept that all knowledge/belief is provisional and thus subject to debate, revision, and even occasional ridicule. But from the fundamentalist perspective, what could be more insane than believing matters of religious faith are open to dialogue or discussion? By refusing to play this Enlightenment game of honoring open and “rational” communication, radical Islam has very successfully thrown a monkey-wrench into the entire system. While many are mad at Comedy Central and Viacom for a gutless stifling of South Park’s imagined  “freedom of speech,” much more unsettling is the realization of just how easy it has been for fundamentalists to derail three centuries of modernity by reverting back to the most primitive of all power configurations—moral absolutism grounded in magical thinking and bolstered by a willingness to commit physical violence. As the South Park episode itself demonstrates so powerfully, there is now one lone constituency in the world that has effectively leveraged itself to a place beyond representation—not by “winning” any arguments in the west’s cherished forum of open debate–but by regressing quite effectively back to the impervious childlike logic of supernatural certainty. Could we find a more persuasive example of the political advantages to be had in behaving like an irrational object rather than an “enlightened” subject, the gains one can accomplish simply by refusing to participate in another order’s system of meaning?