Each time I cross the Galata bridge, I never tire of contemplating with wonder the panorama of Istanbul in which emerge, like drawings, the silhouettes of its longilineal minarets. Unlike the Eiffel Tower, the minarets, multiple and discreet, are not erected as symbols of the city of Istanbul. Nevertheless, Istanbul, without its slender minarets, which symbolize the spiritual elevation of man towards God, would lose a part of its soul. The minarets, in the eyes of the inhabitants—pious and secular, Muslim and non-Muslim—are part of the familiar landscape, of the common heritage. Certainly, many regret that the new mosques built in contemporary Turkey are far from equaling those of the great architect Mimar Sinan (d. 1588 CE), who worked during the glorious days of the Ottoman Empire. The contemporary mosques, for the most part, lack architectural innovation, fineness, and proportion between the dome and the minarets. Likewise, the calls to prayer, since the adoption of cassettes and loudspeakers, have become the source of an ongoing public debate over whether they constitute a nuisance to the sound environment. But public debate does not confine itself to these subjects. The projects of re-opening Hagia Sophia as a place of prayer for Muslims and of constructing a new mosque at Taksim Square in the heart of Istanbul have given rise for two decades to a lively and passionate controversy, a controversy which divides citizens who position themselves against signs of Islamization from those who would like to mark the social rise of Islam by making a religious imprint on Turkey’s public spaces. The split between those who declare themselves, respectively, defenders of secularism and the religious, and who both claim to adhere to the freedom of conscience, runs through the current public life of Turkey. The confrontation became more intense when minarets were compared to bayonets and mosques to barracks in a poem recited in public by Recep Tayyip Erdoğan on the occasion of his electoral victory in 1997.  Erdoğan, the current prime minister of Turkey, was sentenced and jailed for “incitement to religious hatred” for having recited these verses, which are attributed to one of the nationalist poets who wrote in the context of the war for national independence.

It is amazing that in a country with a Muslim majority like Turkey, the historic and cultural symbols of Islam can cease to be parts of the field of a familiar, peaceful, and immutable heritage, and begin to develop a new visibility in the public field and to awaken religious and political divisions. One wonders when and how a symbol, or an object, which is to us so familiar as to have become imperceptible, becomes one day “visible”—nay, ostentatious and disturbing to the eyes of a public. The Swiss referendum which enacted, by a popular majority vote, the ban on constructing minarets reveals to us this new, disturbing visibility of Islam in the eyes of the European public. But at the same time, this quarrel confirms the transformation of the terms of the debate on Islam in Europe.

In the first place, the public visibility of religious and cultural signs of Islam expresses the presence of Muslim actors in European countries. The minarets—as, in other respects the veils, the other mute symbol—reveal the Muslim actor—as pious, as feminine—in public life. This visibility attests to the presence of Muslims in European societies, their desire to stay there, their claim to the freedom of conscience, and their right to worship and dress according to their personal interpretation of their religion. Islam, in a paradoxical way, has become a political and cultural resource for the singularization of immigrants, for their quest for recognition, and so it indicates in turn their particular citizenship in the public space of Europe. This new visibility marks the end of a stage in the migratory phenomenon and in the integration, lived experience, and modes of appropriation of public space in Europe. What hides behind the controversies around Islam is the difficulty of recognizing this passage from the stranger to the citizen.

So, the debates on the minarets and their ban bear witness to the difficulty in Swiss society of recognizing the presence of newly settled Muslims, and of making a place for them in public life. The sentiment that Islam is invading their territory, the fear of losing one’s “home,” has fed these debates. In speeches, Muslims have been asked to install their minarets “back home;” in posters they have been compared to dangerous “black sheep;” they are considered “strangers” and are thus symbolically expelled. All the semantics of the debate lead us to think that the recognition of Islam and Muslims within Swiss society has been refused.

The leitmotiv of the debate, to protect oneself and one’s home from this conquering religion, hides as well the reluctance to renounce the monopoly of Swiss-born citizens on their public space. The undemocratic character of this vote resides in its expression of a desire to contain and fix public space in strict equivalence with an essentialist conception of the nation, without opening it to the plurality of citizens. In another respect, Muslims, with their multiple attachments—to languages, ethnic groups, religion, and the ummah—disrupt the national definition of citizenship and arouse suspicion of their loyalty. The definition of a public space which is identified with a pre-established national community can only create tensions and exclusions in a world traversed by migratory and transnational dynamics, be they religious, economic, or cultural.

In the second place, this passage of Islam to the West confronts Muslims with a series of novel questions, which lend European Islam its distinctive traits. A Europeanized Islam exacerbates the paradox of visibility and invisibility. Here, unlike in Muslim countries, the minarets are mute, the mosques are discreet. Some European democracies, however, with a view to both security and openness, have sought to increase the visibility of places of worship, inviting them to come out of their caves and garages and to appear in daylight.

Nevertheless, the significance of allowing the mosque its visibility is not self-evident; which forms, which spaces, and which concepts can one accord it? Does a mosque always have a dome and a minaret? Can we have a mosque that would not be identifiable as such? Can we separate, as the Swiss want, the minarets from the mosques? Can we replace the word “mosque,” a word that some fear, with “place of prayer”?  In Europe, minarets and mosques face “existential” problems; the minarets are always mute without the muezzins’ call to prayer, and the mosques acquire new architectural forms in response to the landscape and the heritage of their surroundings. How can the mosque rally different ethnic communities? Do, for example, Turks frequent the mosques of Pakistanis in Birmingham? Are the Turkish mosques of Berlin also frequented by North Africans and other Muslim minorities? How are we to arrange things so that the mosques are recognized as both public and religious spaces of European Muslims? By which criterion should one decide the language of the sermon? How might one rethink the space of the mosque for women, for youth, and as the site of diverse activities? All of these questions are important in light of the real lives and daily experiences of Muslims in Europe. The mosque is an interface between the urban environment, Muslim citizens, and religious pluralism. Accepting its visibility leads to a series of negotiations and regulations—aesthetic, religious, financial, architectural, and spatial in nature—in the process of making it an object of a common heritage in-becoming. But this Swiss referendum has imposed the non-negotiable; it is in this sense as well that this vote signifies an undemocratic attitude, as it puts a brake on the processes of evolution, exchange, and cultural mixture. 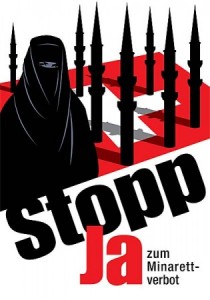 The referendum, far from staying confined to the Swiss context, has resonated in other national contexts and has given a transnational, European dynamic to the debate. Some deplore the Swiss error as one not to be repeated; others have applauded the courage to have said out loud what everybody thinks in a whisper. Polls conducted in France have revealed a favorable opinion of the limitation on the construction of mosques. The British National Party (BNP) has appropriated the “anti-minarets” poster used by its Swiss counterpart (UDC). This poster shows the national flag (Swiss or British, respectively) pierced by minarets represented as guns. There appears as well a woman in full veil. In the English versions, the verses recited by Tayyip Erdoğan (quoted above) are included. In public debates throughout Europe, these same verses have incessantly been taken out of context. One sees how the debate on the minarets in particular, and the visibility of Islam in general, generates transnational dynamics and assemblages of disparate elements. One notices that even insular England and Switzerland, isolated from Europe, enter the European public field. The fear of Islam is instrumentalized by different populist parties and “anti-Islamization politics” finds resonance within the silent majority. Marginal political figures—such as Oscar Freysinger in Switzerland, Gert Wilders in the Netherlands, and Philippe de Villiers in France—have contributed to the transformation of national political agendas across Europe and have won popularity in their fight against the Islamic presence in Europe.

It is around the theme of Islamic visibility, in large part, that collective passions and public debates are mobilized today. The headscarf at school, the burka in the street, the mosque in the city, and the minarets in the landscape indicate the presence of Muslim actors in daily life (sometimes with an Islamicity that is exacerbated and in a state of rupture), but also place on the public agenda the debate over the secular norms of common space. These questions put public space to the test of democratic debate and one risks inflaming such public debate by promoting a politics of fear.

By appealing to personal sentiments and eliciting the visceral and the emotional, one makes of public space a place plagued by prejudices. European democracies have developed by making a distinction between opinion and truth, by advocating the use of reason in public debate. The current political populism threatens this European tradition of the “enlightened public.” The public sphere is at risk of losing its role as the ideal expression of democracy and becoming a place of common sense, of the sacralization of public opinion, and of the contagion of the sensational and scandalous. It is by this regression of public debate towards the irrational and the emotional that the Swiss vote betrays the democratic ideal.

Translated from the French by Lena Royant.