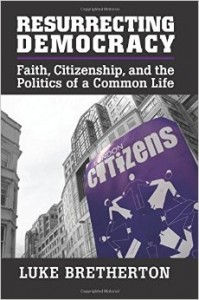 We live in a time of economic and political turmoil when the efficacy of democracy in bringing accountability to financial markets and ruling elites is being tested. It is also a time when the relationship between different faiths and political life is under intense negotiation at a local, national, and international level throughout the world. Luke Bretherton’s Resurrecting Democracy: Faith, Citizenship, and the Politics of a Common Life addresses this context through the lens of community organizing.

Based on a four-year ethnography, the book draws on history, political theory, geography, sociology of religion, theology, and a range of other disciplines to paint a picture of the limits and possibilities of democracy under conditions of globalization and the constructive role religious groups can and do play in forms of grassroots radical democratic politics. Central to the book is an exploration of a problem that political thought has long considered: how to coordinate the, at times, conflicting obligations demanded by faithfulness to the polity and one’s fellow citizens with faithfulness to God and one’s fellow believers. A related question is pressed by globalized, highly diverse contexts such as London, Paris, or New York: How should believers negotiate the tension between being faithful to one’s particular religious beliefs and practices while living in close proximity to and sharing a life with people of other faiths or no faith?

The book explores how community organizing, as a particular form of democratic politics, answers these questions constructively. In doing so it analyzes the meaning and nature of secularity and assesses how community organizing is a way of constructing a form of “faithful secularity.” This alternative form of secularity is mediated through specific kinds of democratic, often agitational practices and produces a realm in which those of different faiths and no faith are able to forge a common life and pursue shared goods.

The second half of the book draws out a number of critical, more theoretical insights for how to understand the role of religiously motivated citizens and institutions in relation to conceptions of civil society and political order. As a whole, the book develops a constructive account for understanding the relationship between religious diversity, democratic citizenship, and economic and political accountability.

In this series, scholars from across the disciplines engage with and respond to Bretherton’s work.

Revitalizing the power of the great in-between

In his thoughtful The Origins of Political Order, Francis Fukuyama argues that there are three pillars of order that are…

Resurrecting Democracy: Faith, Citizenship, and the Politics of a Common Life is a weighty call to “resurrect democracy” and to…

Community organizing is faith-based, at least in its best-known form. Since the 1940s, organizers in the mold of Saul Alinsky…

Let me begin by thanking the contributors to this book forum for their respective reviews. I am enormously grateful for…