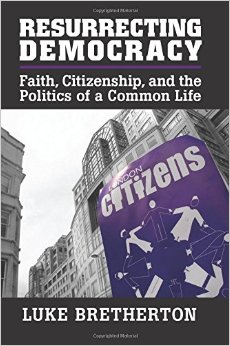 Resurrecting Democracy: Faith, Citizenship, and the Politics of a Common Life is a weighty call to “resurrect democracy” and to do so by adopting the practices of broad-based community organizing (BBCO) as developed by Saul Alinsky in 1930s Chicago and subsequently by a range of organizations in the United States and more recently, beyond. The book draws on Luke Bretherton’s experiences as an active participant in the work of London Citizens during the years before and after the financial crisis of 2008. As a theologian and active Christian, Bretherton brings a valuable religious perspective to his analysis of the work of the alliance and its campaigns to support the living wage and responsible lending in the city of London in the wake of the crash.

I have been part of the same political alliance since the early 2000s, engaging in the living wage campaign and exploring the wider implications of this model of politics for democratic life. Like Bretherton and his co-conspirator, Maurice Glasman, I have been an active participant seeking to learn lessons from the experience and then contribute these to wider debates about democracy, citizenship, public policy, and the role of the university. As Bretherton fully and richly acknowledges, there is now a growing body of research that looks at the strengths and weaknesses of this form of political organization, much of it focused on more than sixty years of activity in the US but with a burgeoning stream of work in other contexts such as the U.K., Australia, and France.

Bretherton’s book makes a novel contribution to this literature by highlighting what he calls the “consociational” nature of BBCO. By forging an alliance between very different religious and secular organizations, he argues that BBCO proffers a way to develop “a mutual fellowship between distinct institutions or groups who are federated together for a common purpose.” This, he claims, is a kind of “faithful secularism” in which religious groups are mobilized with their non-religious neighbors to work together for the common good. The model affords space for religious groups to practice and demonstrate forms of secular democratic politics without pretending to drop their religion. Moreover, by engaging their members, such groups add a popular dimension to the kind of democratic problem solving that is usually confined to policy experts.

The book could have explored the purchase and limits of this idea of consociationalism as applied to BBCO and beyond in a bit more depth. Indeed, Resurrecting Democracy goes on to make very strong claims for BBCO and its application far beyond the diverse consociational alliances forged in urban civil society. In the conclusion to the book, Bretherton suggests that the tools of BBCO could be used to re-democratize many of our institutions and public services, as well as the practices of government. Taking the lessons from BBCO in London, he suggests that “we should ask of any policy or professional practice if it enhances the skills, responsibility, neighborliness, and agency of those it affects and if it allows for the contribution of the wisdom, knowledge, and experience of those affected in its formulation.” As such, the book makes very strong arguments for the practices associated with BBCO, and if this call is to be taken up more widely, the basis for this advocacy demands some more careful thought.

Indeed, there are considerable dangers in putting too many eggs in the basket of this model of politics. Most obviously, the organizations on which BBCO depends are often in decline and/or have their own challenges in keeping their show on the road. In my experience, few if any of these institutions can provide the social and financial support necessary to prioritize external relationship building across their membership. In most cases, the work involved in belonging to the alliance is generally subcontracted to one or two people who were already ideologically committed to doing that sort of thing. Moreover, if “native leaders” come to light inside any of these organizations, they are more likely to be developed through the processes of institution building at home than they are to be devoted to building external relations.

In addition, while the theory of BBCO is focused on the so-called iron rule of organizing that organizers should “never do for others what they can do for themselves,” in practice, much organizing is focused on mobilizing the lay membership of the institutions that belong to the alliance in order to put on highly orchestrated public events. There is generally insufficient capacity to help individuals organize around their own interests and if they do so, it is only when these interests fit with the demands of the campaigns that are already in-train (and in London that would mean organizing around the living wage, community land trusts, access to job training, and rights for asylum seekers and refugees). Moreover, even in these campaigns, much support is based on principle rather than concrete self-interest. Religious organizations are powerful precisely because they have strong sets of beliefs about the right way to behave, and it is this that generally propels them into membership in the alliance in the first place.

In practice then, many of the campaigns led by London Citizens (and its parent organization, Citizens UK) have more in common with social movements and political campaigns than might be suggested by the rhetoric of the organization or parts of Bretherton’s text. While Alinsky and the Industrial Areas Foundation made much of the importance of strengthening democracy through popular engagement in everyday politics focused on individual self-interest, this is very challenging and difficult work. Alinsky’s “rules” have had to be adapted to meet the challenges of a changing society and the reconfigured political possibilities of the contemporary age. Given the weakness of many institutions, the number of people who don’t belong to them, the increased scale of our social geographies (often associated with reduced rootedness to place), the power of the national media to shape local public debate, and the importance of national political parties in shaping the careers of politicians (even local ones), it makes sense to try and link local institutions to forms of social movements or campaigns. This is what London Citizens has been doing over the past decade or more. Its organizers mobilize people via its institutional membership in a largely instrumental way. Through large-enough ‘turn out’ the organization can generate the political capital necessary to develop relationships with the people who are able, and might be willing, to act as desired. Thus, by mobilizing supporters, the alliance has been able to win mayoral support for the living wage, and this has had a positive effect on the city-at-large.

The fact that the alliance does not conform fully to the ideas laid down in the textbooks and manuals written by Alinsky and Edward T. Chambers—much of which has inflected Bretherton’s descriptions of the work of London Citizens—is worthy of much greater attention. Bretherton implicitly recognizes this in parts of the book, but there is little clarity about what is new and where the model is being reinterpreted, albeit it that many of the organizers also struggle to recognize the gap between their doctrine and the way in which they practice their craft.

At the end of the book Bretherton himself advocates the adoption of the IAF “toolkit” for organizing (his “rules for the reform of public services and structures of governance”) in order to strengthen democracy and “put people before program.” This in itself represents a very significant adaptation of the principles and purposes of BBCO as laid out in the bulk of this book and would likely have Alinsky turning in his grave. The original goal of BBCO was to build people’s organizations in order to generate the power needed to negotiate change for the people on their own terms (and to paraphrase Lincoln, this was about organizing “of the people, by the people, for the people”) and it is a very different project from Bretherton’s advocacy of public sector reform that would involve working within the state to improve the way that decisions are made. It is also a very different project from the one in which London Citizens is currently engaged, which is something of a hybrid between the two: linking up civil society organizations in order to fund and support campaigns to which most of the membership can give their support (living wage, affordable housing, good-quality job training).

In this regard, I think Bretherton could have taken a more explicitly critical approach in order to scrutinize the application of BBCO in a complex society like London today. This would have helped to illuminate the gaps between rhetoric and reality, textbook and experience. He could have done more with the idea of consociationality and its wider application, and this would also have helped to identify the wider lessons of BBCO in the context of efforts to resurrect democracy in the twenty-first century.

As Dewey perceptively put it, democracy always needs to reconfigured by a new generation, and this will involve much more than the toolkit associated with BBCO. It will likely require the development of new institutional infrastructure, as well as the renewal of what we already have, in order to better connect the demos with political power. This, in part, is the promise of localism in policymaking today. While BBCO has its place, its pertinence may be weaker, and its fragility greater, than is implied by Bretherton in this important new book.

Jane Wills is Professor of Human Geography at Queen Mary, University of London, United Kingdom. She has longstanding interests in the changing nature of work and new forms of political organization, including the coalitions behind living wage campaigns. Her recent research focus has been on the development of localism in policy making and practice. A new book, Locating Localism: Statecraft, citizenship and democracy, will be published by Policy Press in June 2016.