A liturgy of the soul

When you recall the departed, count yourself as one of them.
—al-Ghazali

If you want to endure life, prepare yourself for death.
—Freud 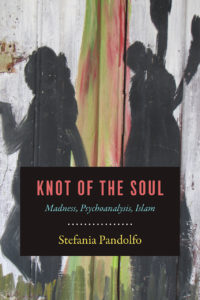 Reading and responding to Knot of the Soul deeply signifies a longstanding dialogue with my friend and interlocutor Stefania Pandolfo. For a decade now, we have discussed our shared interest in questions centered around ʿilm al-nafs—the “science of the soul.” What does it mean to talk about a “science of the soul,” both in its historical and ethnographic instantiations? Can the topographies of the nafs (soul, spirit, psyche) be considered and compared across diverse discursive traditions and intellectual formations? If my work unearths a genealogical connection between the Islamic concept of al-la-shuʿur (an unknown-known) and the Freudian notion of the unconscious, Pandolfo’s work explores a tradition of Islamic therapeutic practice that is convivial with the unconscious. If the nafs is, within this tradition, a space where the Divine can be manifested, then it is also a space for the potential transformation of the soul. What is this space of transformation within Islamic practice and does it find echoes in the psychoanalytic space of the clinic? Crucially, such questions are not merely academic but concern how we engage psychoanalysis in our own lives.

Stefania Pandolfo performs in Knot of the Soul what she terms, following Jacques Lacan, an experimentum mentis—thinking through Islamic theological argumentation and spiritual practice as domains in which some of the core concepts of the psychoanalytic tradition, both Freudian and Lacanian, are addressed.1 The pivot upon which this “experiment” turns is the unconscious as understood both within the psychoanalytic and Islamic traditions. For Freud, the unconscious signaled “the true psychical reality; in its innermost nature it is as much unknown to us as the reality of the external world.” In Knot of the Soul, this unconscious realm is pursued in terms of divine knowledge and the domain of the invisible (al-ghayb).

This invisible realm beyond human perception is referred to as al-la-shuʿur (the “unconscious”), a term borrowed by the early translators of Freud from Ibn ʿArabi, for whom it referred to “the incommensurability and alterity of God”; an un-knowledge that signified “the paradoxical knowledge of the soul.” As Pandolfo shows, opening up to this other scene of the unconscious “requires admitting a subject whose freedom and finitude, responsibility and praxis are articulated in relation to God,” on a “transcendental axis” where the “soul/self becomes the addressee of divine discourse.”

This is perhaps best glimpsed through the imaginal world. In the dream world, signs (āyat) designate the human as the addressee of a divine discourse whose meaning is always “opaque, spotted by zones of penumbra, and interrupted by lacunae that must be acknowledged. The incommensurability of human and divine knowledge—and the reliance on an external, heteronymous law, one that guides through ‘signs’” recalls the divine trial in the parable of Abraham, whom God visits in a dream and tells to sacrifice his son. As Ibn ‘Arabi relates, Abraham was unconscious of the true meaning of his dream, believing in his vision, rather than interpreting it. And yet, “the Real is never unconscious of anything, while the servant is necessarily unconscious of such a thing in relation to some other.”

As I demonstrate in The Arabic Freud, twentieth-century Arab interpreters of Freud, such as the academic psychologist Yusuf Murad, drew upon this idea of an “unknowing” to indicate the presence of an unconscious in human beings within the pages of the postwar journal Majallat ʿIlm al-Nafs. “The family relationship” that Pandolfo pursues, then, between psychoanalysis and the Islamic tradition is “not just analogical. It digs its roots into the intercultural exchanges around . . . the intermediate realm of imagination . . . and the problematic of divine manifestation and prophetic knowledge.” As Pandolfo notes, “[i]f the unconscious is un-knowledge (lā shuʿūr) . . . then psychoanalytic knowledge is fundamentally implicated with Islam and the world of the soul.”

Significantly, the transcendental axis of the dream has been recognized within the psychoanalytic tradition. Lacan’s powerful reading of “a dream suspended around the most anguishing mystery, that which links a father to the corpse of his son close by, of his dead son . . . suggest[s] a mystery that is simply the world of the beyond . . . a beyond that makes itself heard in the dream.” Ever attuned to this “[e]thical-eschatological legacy of psychoanalysis,” Pandolfo returns to the experimentum mentis, which, Lacan says, “consist[s] in adopting the point of view of the Last Judgment.” The audacity of this psychoanalytic experiment leads to nothing short of a reconsideration of ethics, understood as the relation between action and “the desire that inhabits it.”

Pandolfo translates Lacan’s insights in her engagement with the Qur’anic scholar and religious practitioner she calls the Imam, a murshid (religious guide) and muʿlij (therapist). Within the Imam’s rendering of Qur’anic eschatological ethics, the becoming of the soul is the space and movement between the ordeal (ibtilaʾ), “a divine trial to which the subject is called to respond,” and the struggle of the soul (jihad al-nafs) with forms of destruction both internal and external to the self. The alterity captured by the Qur’anic concept of ibtilaʾ “poses the question of responsibility in the encounter with the world understood as an ordeal.” For the Imam, “the ordeal is a decision,” whether the subject is confronted with trial by evil (“the destruction of war, the generalization of death”) or by good (“the satisfaction of a life without need, the pleasure of success”).

Traversing the ordeal as an “act of being” is encumbered by ontological and ethical risks; madness, despair, suicide, and the various maladies of the soul that reveal themselves in the slow death of the subject. It is only through jihad al-nafs that such an encounter with a postcolonial agony and death’s inevitability can be encircled. The reorientation toward the horizon of the Last Judgment further reveals a certain analogy between the heteronymous agency of the drive (Trieb), understood as a tending toward both life and death, creativity and annihilation, and the trials of the self, an unresolvable a spiritual struggle whose impossibility “attests to the presence, vulnerability, and activity of an ethical subject.”

It is within this context of the postcolonial maladies of the soul, as Niklaus Largier argues, “that what we call ‘illness’ takes on a new shape . . . It all comes together, and it all gets untangled . . . in and under the constraints of the liturgy.” The Imam operates in a domain at once theological, ethical, and political, beyond the space of the clinic, receiving his patient by performing the ruqya, “at once a cure, a moral exhortation, and the opening of a stage of the soul.” More literally, the ruqya is a “liturgy where the religious therapist recites the Qur’an over the body of the afflicted struck by an illness of demonic origin. The divine utterance intervenes or descends as an incision that interrupts, and opens the space of a struggle.” Through the intercession of the Imam, a transferential space between souls is created cultivating “a capacity to become the host of a divine gaze” in the afflicted.

If the soul is a place that can be “choked” or constricted, its ethical capacity constrained and suffocated in the midst of trauma and in the confrontation with evil, it can also be expanded and reconnected with its vital source. “The Qur’anic utterance opens an eschatological space, a time of the end, where the voice of the healer materializes a prophetic intervention and the soul of the patient opens to a receptivity of the Invisible.” As the recipient of divine speech, the host of the ruqya receives a “cure of the soul” which is not a resolution of illness, but rather an opening onto another scene.

Pandolfo asks herself what it means to listen to the Imam, translating his thought and practice in her ethnography. What she proposes is not a thick description of a lifeworld; rather, her ethnography interpellates us by asking us to contemplate the possibility of transforming one’s soul today. In this sense, then, Knot of the Soul is a liturgical address, a working through (Durcharbeiten) of the “point of view of the Last Judgment.” It engages our confrontation with madness and death, political subjugation and oppression, both as persons and as collectivities within “the new psychic economies of global capitalism at its dispossessed margins, and in its incipient mutations and disintegrations.” The text explores the reorientation of the human subject in the world through acts of imagination that transform one’s relation to histories of loss and suffering, “opening up the possibility of living again—of futures unforeseen.”

Anthropologists often stake their claims on an engagement with the living, but I think the extraordinary force of Knot of the Soul lies in its encounter with history and with the dead. The past, both of the individual and the collectivity, appears not as a frozen inheritance, nor as a disruption in the present, but as a liminal encounter with death itself. Such a relationship to historical time, the time of “soul-choking” and political oppression, is related to the time of trauma “contained in the structure of the symptom.” And yet, through spiritual cures, this time opens onto the possibility of “a passage to the unknown and the infinite, beyond the human subject and human temporality, onto an Outside where a reconfiguration of relationships may take place”—a leap to another time that might “reinstitute the open-endedness of the world.”

By encountering the dead and the ethical and political coordinates of death, we may begin to think about this passage. Drawing on the fourteenth-century historian and philosopher Ibn Khaldun, Pandolfo conceptualizes the time of calamity—our time—in relation to what Frantz Fanon terms the “vertigo of history,” or what Basit Iqbal refers to as a “nontemporal ‘lapse’ from whose outermost limit one can see life and death.” This time is “at once a historical condition of our time, a ‘sign,’ and a ‘passage’ (the double sense of the Arabic term ʿibra, pl. ʿibar) in the tapestry of a larger cosmic history, a sign one is called to ponder and learn from.” Such, according to Ibn Khaldun, was the ethical task of the historian, a reader of signs, an interlocutor with the dead, who was tasked with “bearing witness to the forms of social and political life that succeeded one another on the revolving scene of the human world, as seized from the historical time of catastrophe, and reading the events and their unfolding as signs and lessons (ʿibar), disclosures of nonhuman time; disclosures of the temporality of the hereafter, which opened visibility and insight into the human world.”

“Tending towards the antagonistic work of death,” Pandolfo explains, “is a never-resolved engagement with the incurable, with the violence and the heteronomy of desire, with madness, and with the materiality of the soma: with the scandal and enigma of alterity.” Pandolfo’s ethnography is a tending towards the work of death. Arguing from within two discursive traditions—Islam and psychoanalysis—Knot of the Soul thus affords us an angle of lucidity from which to contemplate our own disappearance.

Omnia El Shakry is professor of history at the University of California at Davis. Her research centers on the history of the human and religious sciences in modern Egypt and she is the author of The Arabic Freud: Psychoanalysis and Islam in Modern Egypt (Princeton, 2017), The Great Social Laboratory: Subjects of Knowledge in Colonial and Postcolonial Egypt (Stanford, 2007), and editor of the multi-volume Gender and Sexuality in Islam (Routledge, 2016).