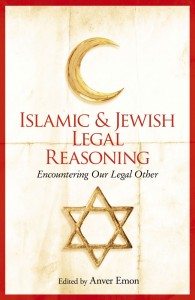 Islamic and Jewish Legal Reasoning: Encountering Our Legal Other is a curious book, in part because it came out of a working group that seemed the least likely vehicle for producing a collection of articles in book form. For five years, sponsored by the University of Toronto and Canada’s Social Science and Humanities Research Council, approximately six Rabbinic law scholars and six Islamic law scholars sat around a table with various legal texts from their respective traditions and talked, discussed, and queried. None of the texts were dated after 1500 CE—anything later would have been far too young for this group to consider. All texts were primary sources and they were provided in the original language (Hebrew or Arabic) and in English translation.

As a protocol of discussion, we would have the scholar of one tradition introduce the text of the other tradition. In other words, a Rabbinic scholar would introduce the Islamic legal text, and the Islamic law scholar would introduce the Rabbinic text. This process precluded anyone from claiming expertise over what the text “says,” and instead created a space of openness, engagement, and even play. The endeavor was not designed to make us into scholars of our tradition’s Other, but rather to experience (in the most robust sense of that word) the encounter with our legal tradition’s Other. Doing so left participants more fully aware of the parochialisms that attend any specialized area of study, the competing ways traditions reason to judgment, and ultimately, how the reasoning of both traditions now fall under the shadow of the Westphalian state—which creates a significant, though relatively recent, blip in how these traditions operate when law is so interminably associated with the state.

The book arose out of a commitment among the scholar-participants that something important happened in those annual two-day workshops at the University of Toronto. But trying to articulate what happened, and even more, trying to showcase that to a reading audience, were not easy matters. In each workshop, scholars not only encountered texts from the two traditions, but also encountered each other as repositories of virtual libraries that both informed and framed how each scholar understood the text we read from the longue duree of his or her tradition. Scholars of the other tradition encountered a different text, in a different language, in a different tradition, and framed quite differently than their own. Encountering that difference, learning about that difference, and understanding the important constitutive work that difference did for each tradition was among the many things we experienced—not merely in terms of aggregating new knowledge, but also (and most importantly) in terms of cultivating a listening and learning posture individually and as a group. The workshop provided a pedagogic context in which difference was not only presumed of the texts, but was constitutive of the collaborative endeavor we agreed to join.

To convey the spirit and operation of the workshops, we decided that anything we wrote needed to capture the pedagogic and scholarly aspects of the workshops. As such, this book is not designed to disseminate new research or challenge a long standing argument in one field or another. Each scholar has done that already and brought their vast research accomplishments to bear upon their work for this book.

The first part of the book is comprised of five chapters that are co-authored by a scholar of the Rabbinic and Islamic legal tradition. Of these five, three essays are explicitly dialogic and reveal the dynamics of the listening and learning posture that animated the workshops. Rumee Ahmed and Aryeh Cohen write about judicial authority and discretion in both traditions, while Rachel Adler and Ayesha Chaudhry engage in a feminist critical conversation about guardianship of brides in the broader context of marriage, contract law, and patriarchy. Rounding this dialogic set of chapters are Marion Katz and Beth Berkowitz who write about how both legal traditions explore the possibility of animals as deserving of certain bounties, as opposed to being relegated to mere property status, as “things.” All three essays address specific texts, which they outline for the reader. As a group, these three essays reflect the real-time experience of being in the working group, sitting at a table talking about texts.

The other two articles in Part I reflect a different aspect of our experience in the working group, namely the import of our virtual libraries. As scholars, we all had virtual libraries that informed our prior research and continue to inform how we understand the traditions on which we claim expertise. That depth of knowledge each of us brought to bear upon our discussions informed the pedagogic imperative to develop a more active listening posture. In their essay, Ayesha Chaudhry and Shari Golberg explore how each tradition employs women as informal, and sometimes even quite formal, policing agents of women’s sexuality. Examining the role of virginity checkers in the Islamic legal tradition, and the sotah (accused adulteress) in the Rabbinic tradition, Chaudhry and Golberg reveal how both traditions transform women into agents of patriarchy.

Part I concludes with an essay by myself and Arye Edrei on the implication of changing political forms on the construction and utilization of both Islamic and Rabbinic law. Edrei remarks how prior to the twentieth century, there was no halakha on the law of war. But after the creation of the State of Israel, religious Zionists proffered a new halakha on the law of war. I situate the premodern fiqh rules governing non-Muslims (the so-called dhimmi rules) in an imperial context that informed the logic and rationale of those rules, but which now seems misplaced in an era of the modern state system. The rise of ISIS, with its claim to a universal caliphate and invocation of the premodern dhimmi rules, adds further nuance to the political assumptions informing the dhimmi rules. Both of us note that the invocation of halakha and fiqh will generally not inform the workings of state governments today. Nonetheless, these turns to halakha and fiqh serve a pedagogy of situating oneself in a world of Others: in these cases, regulating war and minorities  provide the legal heuristics to manage the politics of difference.

The book concludes in Part II with two reflective essays written from disciplinary standpoints. Adam Seligman examines the endeavor of the working group and the five essays of Part I to reflect on the study of religion and religious traditions. “What is so unique and important in this work,” he writes, “is precisely that it seeks, not a new hybrid (which makes sense for automobiles or Mexican television shows, but not for traditions going back millennia) but a dialogue across traditions. Dialogue is a vanishing art, as is listening and forebearing and bearing the other.” For the philosopher Robert Gibbs, this book interrogates what it means to label something as philosophy, as law, as religion. Among his observations, one stands out prominently:

“The logic of plural truth and traditions offers a different frame of philosophy . . . [E]ach tradition does aspire to a universal truth on the basis of its singular perspective. Each can discern in its ongoing debates and reinterpretations that there is a desire to claim that this law is true, and true for everyone. But the pairing of traditions allows us to see paired aspirations and to see that the limits are not a simple rebuttal of that aspiration. Pluralism can help guide us to see how multiple traditions can contribute to truth and can permeate any specific tradition.”

Given the nature of the workshops, it is perhaps fair to say that all of them were more pedagogic than research-oriented—almost too ethereal to yield research outputs that can be verified or replicated in some scientific fashion. It was designed that way, and thus challenged not only the scholar participants in the workshops but now it also challenges readers of this book to answer the interminable “So what?” question. Indeed, why should someone enter into a conversation between scholars of different traditions asking questions about old legal texts? There are a range of reasons from an academic perspective that one could offer: a renewed emphasis on pedagogy; a particular experiment in dialogue and difference; an exercise in comparative religions, and so on. Those are certainly good reasons, but they do not adequately capture the hope of the participants to this project.

In an era in which we are witnessing the turn to nativism across North America and Western Europe, an angst about immigrants and immigration, and a tightening of borders, it may very well be that Adam Seligman is right when he suggests that our embrace of the rational principle of non-contradiction makes living with difference harder to imagine, let alone politically construct. “Yet it is precisely here,” he suggests, “that we can see how much the current collaboration shares with . . . ancients in their ideas of dialogue, restraint, and of that art of translation which is predicative of tolerance and living with the other. We may be schooled in a humility that is not skeptical, a modesty that is not relativist, just as we may learn a belief that is not absolutist.”