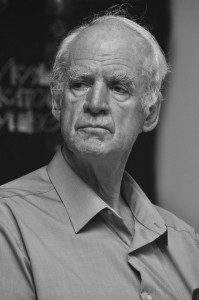 On October 4, 2016, the Berggruen Institute named philosopher Charles Taylor as the inaugural recipient of the Berggruen Prize—a one-million dollar annual award for a thinker “whose ideas are of broad significance for shaping human self-understanding and the advancement of humanity.” For his breadth of study across disciplines, commitment to both academia and public life, and the legacy of his research into human relationship and meaning, the nine-person committee selected Professor Taylor as the first winner of this prize. In the words of Craig Calhoun, current president of the Berggruen Institute and former president of the Social Science Research Council, “Taylor’s own life exemplifies the wisdom that philosophy celebrates, bringing intellectual humanity as well as remarkable knowledge to personal relationships, teaching, scholarship, and public engagement.”

In celebration of this honor for Charles Taylor, we at The Immanent Frame collected some of our favorite content from the past nine years written by or about the man whose concept, the “immanent frame” (Chapter 15 of A Secular Age), is our namesake.

Nine years ago, the first forum published on The Immanent Frame invited scholars to critically respond to Taylor’s 2007 work, A Secular Age. Beginning with an essay by Robert Bellah, who declared A Secular Age to be a “’must read’ for anyone concerned with religion and modernity,” the discussion continued for almost four years, with contributions from Wendy Brown, Talal Asad, Elizabeth Shakman Hurd, Patrick Lee Miller, and a few dozen more scholars. The discussion expanded to include reflections about Varieties of Secularism in a Secular Age, a volume that served as a guide to Taylor’s book.

Charles Taylor himself was given the opportunity to respond to some of the essays, as well as contribute new content to the discussion. His essay “Buffered and porous selves” remains one of the most-read pieces on the blog.

The volume Rethinking Secularism featured the chapter “Western secularity” by Charles Taylor—a portion of which can found here. And along with Cornel West, Judith Butler, and Jürgen Habermas, Charles Taylor contributed to the publication, The Power of Religion in the Public Sphere. For an excerpt from the afterword by Craig Calhoun, read “Religion’s many powers.”

We are grateful for Charles Taylor’s direct and indirect contributions to The Immanent Frame, the Social Science Research Council, and the spheres of political philosophy and religious study more expansively.

Another program of the SSRC, Anxieties of Democracy, has selected Charles Taylor as their 2016 Democracy Fellow. For events and opportunities related to the fellowship, please visit their website.