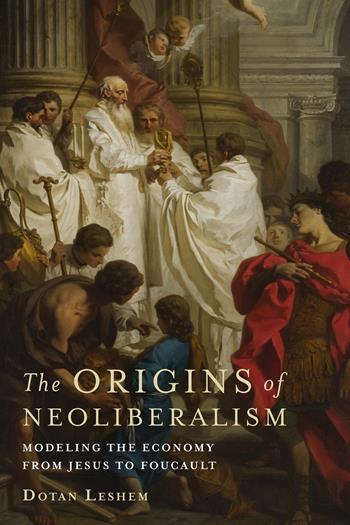 The book does so by tracing the rise of the economy from the private sphere of the earthly household in the classical era into the public sphere of the Christian ecclesia. The transfer of the economy from the private sphere to the public one was accompanied by yet another change: from the management of life necessities to the dispensation of divine mysteries. Following a detailed history of the economy’s rise to divine glory in the years that preceded the baptism of Constantine, the book then describes how Christ’s economy was modeled as the execution and revelation of the divine plan of salvation in the era between the councils of Nicea (in 325) and Chalcedon (in 451). Drawing on exegetical and apologetic tracts, homilies and eulogies, manuals and correspondence, as well as Church canons and creeds, The Origins of Neoliberalism describes how these new economic models radically altered economy’s relations with politics and with philosophy. Reconstructing the formation of economy’s relations with politics and with philosophy in the fourth century reveals how this singular formation led to several key phenomena that are commonly associated with the rise of the modern age. Among them are: progressive history; political subjectivity; the emergence of a distinction between economy and theology; the subjugation of politics to the economy; the migration of freedom from the realm of politics to that of the economy; the economization of philosophical life; the definition of the economic state of exception in relation to law; and the emergence of a (Christian) society whose main concern is the growth of the economy.

The phenomenon of economic growth demonstrates how recovering the origins of neoliberalism in patristic thought can enrich the critique of the neoliberal predicament. This is because of the essential role attributed to the generation of economic growth as the sole criterion for economic and social policy over the last century. At first, it was the halt of growth in the Great Depression that brought about the change from classical liberal economic policy to a Keynesian policy. The policy prescribed by the Keynesians was replaced by a neoliberal one in 1980s, which led to the Great Recession and whose ability to generate growth was oversold, as recently acknowledged by the IMF. It seems as if the prospect of a long-term decline in economic growth, most commonly referred to nowadays as Secular Stagnation, has opened the door for yet another policy shift, either progressive or radical. Furthermore, as we become horrifically aware of the devastating consequences to the natural environment due to our addiction to economic growth, the discovery of the roots of this growth in late antique Christian thought reveals the peculiar nature of our addiction to economic growth. This discovery may help us to remodel the economy by introducing models such as a non-growing economy of the ancients before the rise of Christianity, or an economy of growth of a totally different substance, as was the case with Christ’s economy.

As shown in the book, the concept of economic growth can be traced back to Gregory of Nyssa, a Church father from the fourth century. Parting with the tradition of Greek philosophy, Gregory conceptualized human beings as a becoming creature whose desires know no limits in the bounds of the economic sphere. In light of this new human condition, itself an effect of the newly erected distinction between theology and economy, Gregory distinguished between three kinds of human desires. Like many of his Greek predecessors, the first type he discerned included the basic bodily needs that humans share with other creatures. These needs he regarded as necessary for ensuring the existence of the species. Satisfying such needs he considered as neither morally “good” nor “evil” in themselves. Gregory described the second type as a vicious perversion of natural bodily desires. This type he devised as originating in the unchecked self-enslavement to such desires.

Gregory’s innovation lies in the claim that satisfying bodily desires to the exact degree that will secure existence relieves an energy that can be turned to a third type of desire—the desire for God. Practicing this desire, he explained, generates unlimited growth of divinization. According to Gregory, the reason that humans’ desire for God generates growth and does not, like the earthly types, incarcerate humans in a circular economy of desire-saturation-desire had to do with the unique nature of the Godhead as an object of desire: He knows no limits and, as such, generates in people an insatiable desire. Hannah Arendt’s famously ascribed the origin of modern economic growth to the unleashing of the life process from the boundaries of the private sphere of the earthly household into the public one of society. Following Gregory, one can paraphrase Arendt saying that the growth element unique to humans had completely overcame and overgrown the processes of decay by which organic life is checked and balanced in nature’s household. Eventually, Gregory concluded that the insatiable desire for the divine object becomes itself the object of desire, and growth for its own sake thus became the ultimate test and goal of the divinized economy generated by the members of the society of believers in Christ’s economy. Moreover, Gregory’s personal economic growth, that is, the divinization of each member of the ecclesiastical body, is accumulated and together accounts for growth on an ecumenical scale.

The Origins of Neoliberalism follows Michel Foucault’s and Giorgio Agamben’s genealogical inquiries into the origins of economy and government in the Christianity of late antiquity. It does so by tracing the development of the definitions of the scope and method of economics from John Stuart Mill to Gary Becker. The book recounts how humans are governed in the neoliberal marketized economy as creatures who act in a unified space in which each and every object has the quality of generating non saturated desire. The pursuit of satisfying these non-saturated desires, the book argues, are responsible for generating economic growth. Inquiring into the patristic origins of neoliberalism suggests that the secularization of the economy that took place when the economy migrated from the Christian ecclesia to the liberal market involved the radicalization of the Christian theory of economic growth so that each and every object (and no longer only the Divine One) possesses the ability to generate in humans an unlimited, unsaturated desire. Put differently, the secularization brought about by the marketization of Christ economy revolved around the indiscriminate ascription of His divine ability to generate insatiable growth and not the exclusion of the desire for God from the economy (if only because this desire is analyzed by economists). Instead of the exclusion of God from the economy what took place was the divinization of each desiring subject and every object of desire. If this is so, it would seem plausible to describe this double-edged displacement of Christ economy’s excessive quality to the interplay between, on the one hand, a desiring subject and, on the other hand, desired objects.

Backdating the discovery of economic growth to the fourth century and revealing its theological dimensions demonstrates how situating the origins of neoliberalism in the Christianity of late antiquity may offer critical resources for the purpose of dealing with neoliberalism today. It may, as described in the book, be understood against the background of the migration of the economy from the Christian ecclesia to the liberal market and of the subsequent absorption of all spheres of life into the marketized economy in the neoliberal era. It is my hope that the genealogical inquiry into the Christian origins of the neoliberal marketized economy will be of service for a new political philosophy that will remodel the economy and its relations with politics and philosophy in a way that will facilitate overcoming the neoliberal economy.

An excerpt from the book that includes a discussion on Michel Foucault and Giorgio Agamben genealogical inquiries into the origins of economy and government in the Christianity of late antiquity can be found here.

Dotan Leshem is a historian of systems of economic and political thought and a senior lecturer in the School of Political Science at the University of Haifa. Leshem’s articles appeared in journals of history of economic thought, history of the humanities, critical studies, political theory, theology, economics and comparative literature. His article “Oikonomia Redefined” was awarded best article of 2014 by the History of Economics Society. Leshem’s book The Origins of Neoliberalism: Modeling The Economy from Jesus to Foucault was published by Columbia University Press in June 2016.