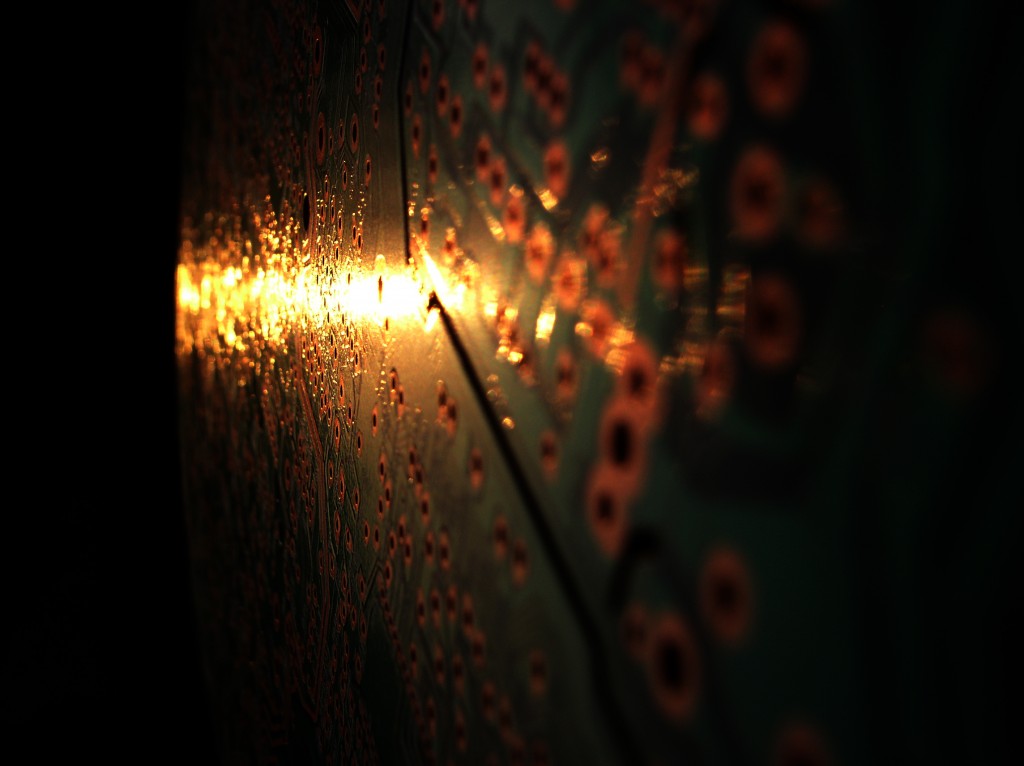 One of the essential early texts of the open source software movement was “The Cathedral and the Bazaar,” a 1999 essay by programmer Eric S. Raymond in which he juxtaposes two approaches to developing computer programs, each with an analogy to a fixture of the medieval city: from the top down, like a cathedral, and from the bottom up, like a street market. At the time, open source software development was still largely characterized by a command-and-control (top down) process; Raymond advocated a more bottom-up method. He understood the bazaar (contra Clifford Geertz) as representing a way of harnessing collective intelligence toward collective ends: share the code with the world, and the world will fix its bugs in no time. Partly as a result of Raymond’s essay, the code underlying Netscape went open source, and the community-maintained Firefox browser was born. Much of the Internet—from Linux servers to Android phones—now runs on bazaar-style software.

Raymond’s choice of the big, bad cathedral as a foil to the people’s bazaar probably betrays the anti-religious, free-market biases of his techno-libertarian ilk, but Raymond has more to offer religion than a slight: in its practical sociology of open source production, his essay can serve as a much-needed corrective to the technological analogies that have tended to inform the study of religion.

Tech culture has often drawn upon religious analogies to understand its own priesthood, its cults, its evangelists. Students of religion, in turn, have long theorized by means of technological imagery, from the forge and the crucible and the spandrel to the social network. Both techies and religionists lean on economic language, like Raymond’s market, and for good reason—religion and tech each have much to do with distributions of value. Karl Marx, with industrial factory workers in mind, saw religion as a grand delusion orchestrating mass exploitation. Max Weber, observing the emergence of office bureaucracies, attributed the capitalist frenzy to a Protestant ethic. A religion reporter at a major American newspaper once told me he learned most of what he needs to do his job while covering the underground economy of the mob.

The economic analogies we choose have serious consequences for how we think about religion. Marx’s dialectical-materialist religion, for instance, is always collective, and is illusory from the get-go. Weber’s religion of the office turns soteriology into a management philosophy. And so on.

The most ambitious economic theory of religion in recent decades has been the rational-choice scheme that Rodney Stark and William Sims Bainbridge developed, beginning in the late 1970s. The past, present, and future of religion, they argued, are explainable by means of the same utility-maximizing logic as neoclassical economics—we’re all trying to sop up whatever spiritual benefits we can get for the lowest possible cost. Stark went on to retell the advent of Christianity as a case in point; Bainbridge, meanwhile, ported their theory’s machine-readable propositions into computer algorithms to model religious behaviors, and even experimented with personality-preservation software, reasoning that if the utility of an afterlife could be achieved without the cost of piety, religion would no longer corner that particular market and more people could feel free to find other uses for their time.

The afrofuturist jazz musician Sun Ra alluded to such an apotheosis of machine logic—the gizmos of the present reinterpreting the gods of the past—in his poem “confusion and chaos”:

To stave off the allure of such totalizing explanations, it is helpful to have a variety of useful, and admittedly partial, analogies on hand. No one theory can explain everything, especially where cultural systems are concerned. If there’s one thing most good students of religion tend to share, it’s promiscuity. So, for the sake of promiscuity, what other kinds of analogies can we turn to?

Raymond’s “The Cathedral and the Bazaar” gestures toward a logic that has gone mostly unused as a lens through which to look upon religion: the commons—the economy of people co-managing commonly held resources. The open source-software paradigm that concerned him can be reduced to neither the cathedral’s hierarchy nor the bazaar’s market forces; it’s more akin to the on-the-ground practices of commoning that enliven both cathedrals and bazaars. Yet there has been no Stark or Bainbridge to port the commons into a framework for the study of religion.

Open source has spurred a revival of interest in the economics of the commons, which normally lie hidden in plain view. Online, many of us participate in this economy daily (whether we know it or not) by making use of Creative Commons licenses, the Wikimedia Commons archive, and open access publishing. Tech culture permits talk about the commons as fairly vague, catch-all jargon—“the anything commons!”—but we are learning to see it as a robust kind of economic system, with rules and logics distinct from those of, say, capitalism or socialism. Elinor Ostrom, the first and only female Nobel laureate in economics, spent the latter part of her career elucidating its principles by studying examples like commonly held pasture lands and fisheries. She identified eight practices that commoners tend to rely on—establishing clear boundaries, for instance, and participatory governance, and mechanisms for conflict resolution. Historian Peter Linebaugh has recovered neglected traces of the commons in documents like the Magna Carta, and applied their insights to contemporary movements. David Bollier’s recent book, Think Like a Commoner, is the best introduction to the commons available today.

The commons is an economy for stewardship. It inclines less toward maximizing profits than toward ensuring that shared resources are accessible and that their use is sustainable. Commoning has often been overlooked because of how deeply its practices embed themselves in the local cultures, calendars, and rituals that order economic life—without World Bank economists bothering to standardize them, these practices vary everywhere you go. But in tech culture and beyond, commoning is coming back. People are craving more cooperative forms of doing business, shared stores of knowledge (as intellectual property regimes grow less forgiving), and commons-based strategies for addressing the climate crisis.

In my reporting I’ve seen these cravings firsthand, and I’ve seen them intersect tellingly with religion. I visited a group of young hacktivists from across Europe who turned to ancient monasteries as a model for anchoring new kinds of commons-oriented cities. I went to Ecuador for a conference attempting to reimagine the country’s economy around the commons while taking cues from indigenous spirituality and the Integral philosophy of Ken Wilber. I attended the largest conference on the commons in the United States to date, held at a boutique retreat center where meditation and wastewater management were being honed into tools for resisting the carbon economy in the Hudson Valley region. Even when students of religion aren’t thinking about the commons, commoners are turning to religion.

When we begin to see the people we study not just as lumpens or utility-maximizers, but as commoners, we can see in new ways how their religions aid in governing shared resources. We can understand ancient concepts like gleaning and jubilee—two constraints on private property found in the Hebrew Bible—not as tangential exceptions but as essential values. We can also examine rules over access to texts, interpretations, and shared bodies of knowledge and wisdom. This, too, tends to involve commoning. Alongside approaches to religion that emphasize powerful leaders, or the interplay of psychological forces, religion itself can be thought of as a commons. Especially in less-industrial societies, this approach may suit the context better than more modern economic analogies do.

The commons, like any economy, can also inform the structures of our own labor. Scholars and journalists already prize information sharing more than many other professions, but understanding the commons could help us build sharing more firmly into our business models. We can be less proprietary and more collaborative, even while enforcing rules against plagiarism and avoiding other tragedies of the intellectual commons. (For my part, as a reporter, I have begun posting portions of my research notes online.) Open access scholarly journals and magazines with Creative Commons licenses are increasingly prevalent, but their rise hasn’t always come with the business models needed to sustain them. The commons is an economy, not a free-for-all; the purpose is to support producers, not subvert them. That’s why Creative Commons and peer-production licenses make such careful distinctions about who can use shared content and when. How we share matters as much as that we share.

“The Cathedral and the Bazaar,” with its concern for the how, has become a canonical text for digital commoners. Raymond proposed a series of aphorisms for software developers—most famously “release early, release often” and “given enough eyeballs, all bugs are shallow”—that craft a certain kind of subjectivity and certain attitudes toward one’s errors. It celebrates certain hierarchies of value and certain behaviors toward fellow commoners. His conclusions amount to a practical and moral code. Even while writing off the cathedral, Raymond was nonetheless very much involved in the kinds of things students of religion set out to study.