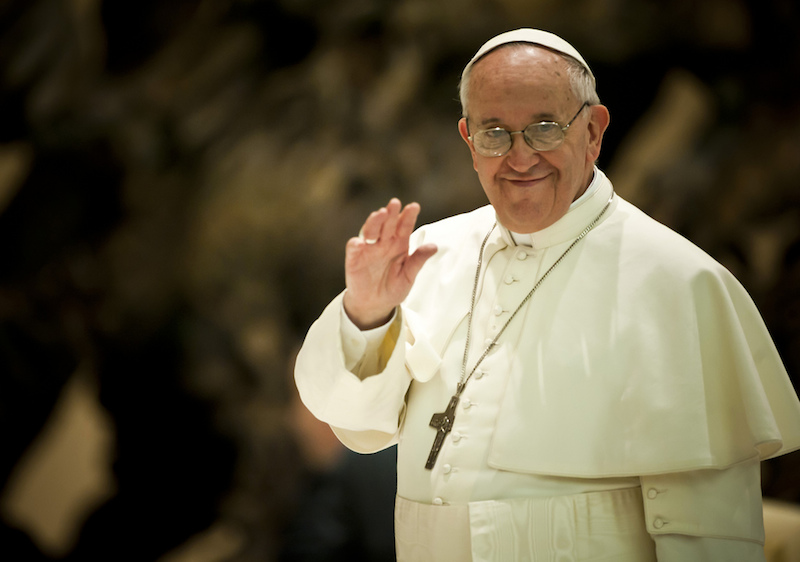 On December 11, Time Magazine named Pope Francis its 2013 “Person of the Year.” The award, according to Time, seeks to honor the person or group who, “for better or for worse,” has most influenced the events of that year.

In the months since his election in March, Francis has impressed Catholics and observers around the world. His statements and actions reflect, many people feel, a kindness, openness, and humility that they hope signals a shift for the Catholic Church as a whole.

A native of Argentina, Francis is the first non-European pope. He seems to have taken a softened stance on certain hot-button social issues. (In July, he answered a reporter’s question about the status of gay priests in the church by asking, “Who am I to judge?”) His emphasis on addressing economic injustice, as well as his perceived humility and his human touch, have made him immensely popular in just a few short months. But critics of the Church refuse to lionize Pope Francis, continuing to question his stances on such questions as women’s rights, gay rights, and the Church’s ongoing sexual abuse crisis.

Time’s explanation for the choice emphasizes Francis’s potential to transform a “mysterious and magical” papacy: 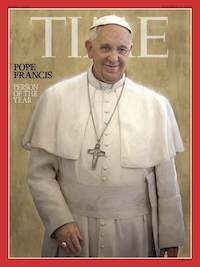 But what makes this Pope so important is the speed with which he has captured the imaginations of millions who had given up on hoping for the church at all. People weary of the endless parsing of sexual ethics, the buck-passing infighting over lines of authority when all the while (to borrow from Milton), “the hungry Sheep look up, and are not fed.” In a matter of months, Francis has elevated the healing mission of the church—the church as servant and comforter of hurting people in an often harsh world—above the doctrinal police work so important to his recent predecessors. John Paul II and Benedict XVI were professors of theology. Francis is a former janitor, nightclub bouncer, chemical technician and literature teacher.

And behind his self-effacing facade, he is a very canny operator. He makes masterly use of 21st century tools to perform his 1st century office. He is photographed washing the feet of female convicts, posing for selfies with young visitors to the Vatican, embracing a man with a deformed face. He is quoted saying of women who consider abortion because of poverty or rape, “Who can remain unmoved before such painful situations?” Of gay people: “If a homosexual person is of good will and is in search of God, I am no one to judge.” To divorced and remarried Catholics who are, by rule, forbidden from taking Communion, he says that this crucial rite “is not a prize for the perfect but a powerful medicine and nourishment for the weak.”

Through these conscious and skillful evocations of moments in the ministry of Jesus, as recounted in the Gospels, this new Pope may have found a way out of the 20th century culture wars, which have left the church moribund in much of Western Europe and on the defensive from Dublin to Los Angeles. But the paradox of the papacy is that each new man’s success is burdened by the astonishing successes of Popes past. The weight of history, of doctrines and dogmas woven intricately century by century, genius by genius, is both the source and the limitation of papal power. It radiates from every statue, crypt and hand-painted vellum text in Rome—and in churches, libraries, hospitals, universities and museums around the globe. A Pope sets his own course only if he can conform it to paths already chosen.

Francis graced the cover of another major publication this week—the New Yorker, which features James Carroll’s account of “a radical pope’s first year“: 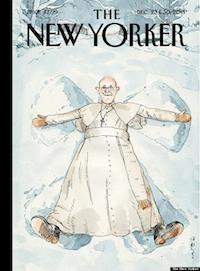 Francis has not hesitated to criticize the Church itself—including the clerical inner circle on which he now depends. Speaking before a gathering of newly consecrated bishops in September, he denounced the “psychology of princes,” and called the ambitious trek up the ladder of episcopal appointments a form of “spiritual adultery.” “The spirit of careerism,” he warned, “is a form of cancer.” But neither does he exempt himself from criticism. “Since I am called to put into practice what I ask of others,” he wrote in “The Joy of the Gospel,” “I too must think about a conversion of the papacy.”

This change in course was not to be expected from Cardinal Jorge Mario Bergoglio. He was said to have been runner-up to Ratzinger in the 2005 conclave, but was not seen as a figure of innovation. Upon his election to the papacy, the Times described him as “a conventional choice, a theological conservative of Italian ancestry who vigorously backs Vatican positions on abortion, gay marriage, the ordination of women and other major issues.” As Archbishop of Buenos Aires, Bergoglio criticized government initiatives to legalize gay marriage and to loosen restrictions on abortion in Argentina, leading President Cristina Fernández de Kirchner to accuse him of “ideological malfeasance.” In 2010, when Bergoglio denounced same-sex-marriage legislation as “a maneuver by the devil,” Kirchner said, “Bergoglio’s position is medieval.”

Recently, Francis has sounded anything but medieval. He seemed to reverse long-set Catholic attitudes, if not actual doctrines, when he told Spadaro, “I have a dogmatic certainty: God is in every person’s life.” In an early-morning homily in the Vatican hostel where he lives, he anticipated traditionalists’ objections, saying, “Not just Catholics. Everyone! ‘Father, the atheists?’ Even the atheists. Everyone!” For Francis, the Church’s purpose is not to bring God to the world but simply to emphasize God’s presence—already there.

The Advocate, a prominent gay magazine, joined Time in calling Francis their “Person of the Year,” provoking dissent from many gay activists. At the Huffington Post, Michelangelo Signorile writes:

Sure, if the pope is not speaking as virulently on the issue as the previous pope, certainly that’s a positive. But the Catholic Church has a long way to go on gay, lesbian, bisexual and transgender people — and women — in terms of changing its doctrine. Francis may be embarking on that monumental project, which may take a century. Or he may not be, and is just keeping his head down, focusing on the issues he wants to focus on… He may be tamping down the talk of homosexuality among church leaders while not bothering with really changing the homophobia built into the church, which could just ruffle too many feathers.

Meanwhile, the National Catholic Reporter has a piece from Sister Joan Chittister, who is skeptical that Francis has the interests of women at heart:

The pope’s recent statement on women to a meeting of the Women’s Section of the Pontifical Council for the Laity in Rome concentrated almost entirely on women’s maternity, which occupies — at best — about 20 years of a woman’s life. Most modern women, demographic data indicates, live at least another 35 to 40 years after the youngest child leaves home. And after that? What is her role then? Is maternity her only value, her perpetual definition? What does she do now with her personal talents, her insights, her gifts that, they tell us, are given for the sake of the world?

At the Washington Post, Elizabeth Tenety, who edits the Post’s “OnFaith” blog, isn’t sure how revolutionary Francis really is, at least compared to Jesus:

Both left and right need to wake up. Francis is, at his heart, a spiritual leader. His mission may have political implications, but he has come to serve God, not to advance the platform of the Democratic Party — and it’s presumptuous to imagine otherwise. Even in discussions of economic inequality, Francis sees the primacy of the faith: “I am firmly convinced that openness to the transcendent can bring about a new political and economic mindset that would help to break down the wall of separation between the economy and the common good of society,” he writes in “Evangelii Gaudium.” Oh, my: Sounds like Francis believes in trickle-down transcendence.

For more on Pope Francis, read TIF’s “off the cuff” roundtable, “The Vatican Spring?”