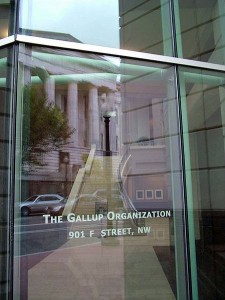 Gallup’s latest poll, released today, breaks down presidential candidate support by voter religiosity and religious identity. Mitt Romney leads Barack Obama, 54% to 37%, among very religious voters. Obama leads Romney, 54% to 40%, among the moderately religious and 61% to 30% among the nonreligious.  Voters’ varying degrees of religiosity was determined based on responses to two questions regarding “the importance of religion in one’s life and about church attendance, yielding three specific groups”:

Very religious — Religion is an important part of daily life and church/synagogue/mosque attendance occurs at least every week or almost every week. This group makes up 41% of registered voters interviewed April 19-23.

Moderately religious — All others who do not fall into the very religious or nonreligious groups but who gave valid responses on both religion questions. This group makes up 27% of registered voters.

Nonreligious — Religion is not an important part of daily life and respondents seldom or never attend church/synagogue/mosque. This group makes up 32% of registered voters.

The poll results also reveal that Protestants favor Romney, whereas Catholics favor Obama; and that highly religious white Protestants (“the functional equivalent of the group of voters often called evangelicals,” according to Gallup) support Romney over Obama by a substantial 41%. However, at Religion Dispatches, Sarah Posner writes that the poll problematically fails to differentiate between mainline Protestants and evangelicals:

The poll doesn’t distinguish between mainline Protestants and evangelicals, instead lumping them together in the “Protestant” category. Because evangelicals make up such a significant chunk both of the “very religious” and of “Protestants” it would of course be helpful to know more about their presence in this overly broad category. But Gallup doesn’t tell us. Instead, the analysis breaks down Protestants by “very religious,” “moderately religious” and “non-religious,” and guess what? Obama outperforms Romney with the latter two demographics. Gallup concludes that the group it calls “very religious” white Protestants, the majority of whom support Romney, “is the functional equivalent of the group of voters often called evangelicals.” The poor mainline Protestants who say they go to church weekly or more and that religion plays a big role in their lives are made invisible.