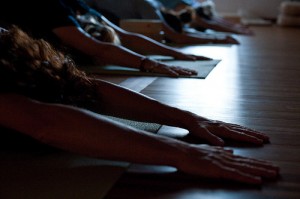 NPR’s Margot Adler reports on the current popularity of yoga in the United States, and its disassociation with Hinduism. She explores the perception of yoga as a form of relaxation and physical exercise, contrasting this with the efforts of the Hindu American Foundation to “take back yoga.”  Some American Hindus claim that something important is lost when yoga is understood narrowly, that is, without the importance philosophy and lifestyle have for its practice:

“What we’re trying to say is that the holistic practice of yoga goes beyond just a couple of asanas [postures] on a mat. It is a lifestyle, and it’s a philosophy,” Shah says.

“How do you lead your life in terms of truthfulness? And nonviolence? And purity? The lifestyle aspect of yoga,” Shah says, “has been lost.”

Scholarly debate, meanwhile, contests that yoga technically predates canonical Hinduism, and that there is no “one” yoga:

“The genius of yoga,” she says, is that it’s “accessible to all. It’s very important to not overstress the Hindu origins of yoga. And at the same time, nobody should dismiss the vast importance that Hinduism has played in the evolution of yoga over the centuries,” West says…

Read or listen to the full story at NPR.