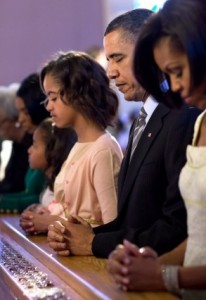 Over at Foreign Affairs, Andrew Preston has written an article exploring the paradox of religion in U.S. foreign policy. Pointing out that religiosity is on the rise worldwide, he criticizes both the Bush and Obama administrations’ approaches towards religion:

Strangely, however, neither Bush nor Obama has been particularly successful in harnessing religion’s authority in support of the United States’ diplomatic and strategic goals. Bush relied too much on the exceptionalist belief that the United States was uniquely virtuous. In doing so, he alienated those who did not share that vision. By contrast, Obama has not always matched his soaring rhetoric with action on the ground.

Many of Obama’s most important foreign policy speeches have placed religion front and center. In several significant addresses in 2009, he used religious ideas and values to support the promotion of democracy, human rights, and the war on terror….Rhetoric is important, but direct action grounds real diplomacy. And on that front, the White House has not kept up with the issue. It took 18 months for Obama to appoint a director of the State Department’s Office of International Religious Freedom, which monitors the extent to which other nations respect the religious liberty of their own citizens. He has also been slow to follow up the religious liberty objectives he laid out, most notably in his Cairo speech, for the Middle East.

Preston notes that religion has always presented a bit of a problem for the U.S., which possesses a religious worldview composed of two distinct, and sometimes contradictory, elements: “an exceptionalist conceit of the United States as God’s chosen nation and an embrace of religious liberty historically grounded in the separation of church and state.” American leaders must tread carefully, and ultimately, Preston argues for religious liberty to be at the forefront of American democratization efforts; for the U.S. to not just speak language of faith but to practice what it preaches:

Democracy promotion is important, but it would be far more effective if tied explicitly to the spread of religious liberty. Just as countries are penalized, diplomatically and economically, for undemocratic practices or human rights abuses, so, too, should they be subject to pressure, and perhaps even sanctions, if they violate their citizens’ freedom of religion. It is clear which direction today’s modernizing states are heading.

The full article is available here. For more on religious freedom, read our ongoing discussion.