After Trump was elected president it felt like the sky had turned to iron with nothing but smudgy glass portals set in intervals through which I could even catch a glimpse of blue or the stars. It was like looking through the eyes of the long dead German exile Walter Benjamin who in the 1930s was obsessed with the Paris arcades. Was his fascination with these structures like mine a melancholia about the coming future; even dreams had a ceiling here while around and inside these greenhouses fascism was flourishing. He could at least walk out of these structures; I can’t. I read Susan Lepselter’s book soon after the election for the first time, then a second, and up to five times by now in part because in her book the sky is still open, filled with stars. It gives me hope. The sky hasn’t turned to iron yet. Where Benjamin retreated in his arcades to the point of virtual disappearance, Lepselter’s writing coalesces around the reader. She turns ethnography into poetics. 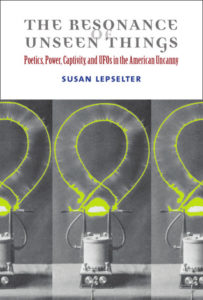 Her work, like Benjamin’s, is simultaneously nostalgic and science fiction. The Resonance of Unseen Things takes place principally before the fall of the Twin Towers. Her first interview is in 1992. The first Gulf War has just occurred. The 90s is the X-Files decade and the normalization of alien invaders and visitors. It is the prehistory of the contemporary moment. Most of her accounts are drawn from the interior of Nevada and the city of Rachel near Area 51. The early interviews take place in the disguised southern town Hillville, which sounds like it might be near Greendale in the Archie comic books as it appears in Sabrina on Netflix. Many of her informants are soaked with conspiracy theories about the deep state, Jewish money, and government surveillance, which will become the ideological imaginary behind the alt-Right and the Trump phenomena. Her interviews on this side of the present resemble the Jewish correspondent who interviewed ordinary Germans after the War who claimed the Holocaust was a Jewish hoax. They still adored Hitler. Lepselter’s ordinary Americans are avid TV watchers, old cowboys, ranchers, diner owners, waitresses, veterans, retired miners, and county clerks. They live in trailers and campers, smoke, are concerned with the marks of the Beast, have stacks of paperbacks, and seemingly are the ones most vulnerable to the trauma of the uncanny.

Lepselter adds the sky to the uncanny. She takes the roof off Sigmund Freud’s accounts and lets the stars appear in his half-lit scenarios. Her strategic use of history rearranges how the uncanny can be read. It makes possible the connection between the appearance of the uncanny, occult-like moments, the hints at child abduction in “The Sandman,” and the anti-Semitism that encircled the writing in the first part of the twentieth century and the Holocaust. Lepselter doesn’t describe this directly. Like Medusa it had to be approached with a mirror, in this case, poetics.

Freud wrote a letter from Paris to his wife’s sister with whom he purportedly had a longterm affair, describing the residents as uncanny, encountering them as if they were a different species. This is 1885, before his definitive essay on the phenomena in 1919 where his descriptions of such encounters are solitary affairs and are grounded in the sexual horror of castration. There are no other individuals, much less crowds. Lepselter expands Freud’s use of the uncanny by unhinging it from sexuality to allow the resonance in her informants’ accounts to hum and vibrate like barbed wire strung tight across the plains.

There is a phenomenon in the West described as the “big sky.” My ex-girlfriend talks about the sky in the East being low. Now that I live in Buffalo swamped by city lights and not in the Alabama hills, I understand what she means. The horizon is low. The big sky looms over all of Lepselter’s informants’ testimonies. The sky is the home of the aliens and the oceanic teeming with dangerous carnivores. It even swallows the author in the concluding episode as she flies out of Las Vegas. Until then she has been landlocked. The sky comes back to life like Freud’s dead spring. It’s a portal through which things pass. Lepselter’s writing works like a revolving satellite in the clear sky over the traumatized landscape she documents. What comes through are transmissions to the future about something coming like Trump. For her informants his election may have calmed the sky.

If I had to choose three books from different periods to surround The Resonance of Unseen Things in a tiny Borges-like library, they would be Kathleen Stewart’s Ordinary Affects (2007), Max Weber’s “The Protestant Ethic and the Spirit of Capitalism” from the beginning of the twentieth century, and the French anthropologist Marc Augé’s War of Dreams (1998). Augé saw the tangle of dreams, internet, and TV images as an invasion of fiction that threatened the real in The Invaders, a late 1960s American TV show where aliens take over humans through a process of total substitution. This alien substitution is reminiscent of Lepselter’s informants’ fears and points to the underworld of media technologies pushing up against her informants. Ordinary Affects, a stylistic explosion, opened a space for Lepselter and shares with The Resonance of Unseen Things the sense that affect is a wavelength running through terrains. Weber’s affect essay from over one hundred years ago touches the last outpouring of Indian abduction fantasies that anchors Lepselter’s work and stands hidden behind these two pioneering books on what he would call the post-Protestant landscape. It’s in this essay that Weber introduces the concept of the steel casing or the iron cage, unintentionally describing the first automata. It’s the uncanny sky that differentiates Lepselter’s work from the others in the library.

At the end of her book Lepselter moves from what the UFO researcher J. Allen Hynek calls encounters of the first, a sighting of a UFO at five hundred feet or more and the second, physical evidence left behind by aliens, to the third kind where there is a face-to-face encounter with an alien. While waiting for her flight late at night in Las Vegas, a Man in Black approaches her. They talk. She tells him she is a writer and she’s tired, nothing personal but she’s going to read. But then the extraordinary happened. “Ah!” Susan! he said. “I see you have in you the sociological imagination!” The man vanishes back into the crowd as suddenly as he had appeared. For Susan, this was an encounter with possibly an automaton who knew who she was. At the least it was an incident almost identical to ones described by her informants. This is a point where the book wavers back and forth between poetics and theory. Is this a book by a writer or a social scientist? It’s here the author’s persona is at its most vulnerable. She experiences the uncanny. The writing is almost tender, more tentative. Previous appearances of the author as Susan occurred in controlled settings but in the final chapter, Lepselter is dissolving. Only Susan is present here.

She boards the plane. A John Travolta movie is playing on the screens, an unexpected bit of significance since he’s a Scientologist. The book ends like this: “The rain on the window recycled from a time we can’t remember, and our memories are not simply our own.” She ends the book showing the possibility of a new phase of the ethnographer. My last book ends eerily like hers, as if I was on that plane; “Proust’s madeleine had evolved backwards into a scallop without any recollection of Marcel or a home. They were tides and sand. For Patrik, this was glory. He was where the North Sea touched Alabama.”

I have my own UFO encounter. It occurred when I was around nineteen years old. My cousin and I had hiked through the dark to the top of a hill overlooking a deep pond at the bottom of an abandoned rock quarry on what was called Crooked Mountain Road, a gutted backwoods connector that wound through the mountains to the dump outside the nearest town. The sky was piercingly clear. We sat there talking quietly, looking at the sky. What had appeared to be a cluster of stars began to move in a zigzag pattern. The effect of this was to make the points of light seem like they’re just above the nearby hill above the tree line. We both saw it. In the woods below we heard a rustling sound as if something was moving through the brush. We quietly moved to the other side of the quarry. The lights that were moving were now gone. Where, we couldn’t tell. The two of us slid into the pines and waited. At the ridge where we’d been, two figures appeared carrying large hammers. They stood there peering into the trees looking for us. Then they scrambled down the ridge and out of sight. For a long time I’ve imagined the figures were from the family that lived at the entrance of the road and they’d heard us walking by in the night and had no relationship to the moving lights. After reading Susan’s book my thinking has changed. I think they may have been aliens or collaborators and that I suffer from apophenia, a symptom of alien abduction or an encounter that I can’t fully recall. Maybe her book’s contribution to me is that it’s slowly drawing to the surface this repressed past.

The Resonance of Unseen Things is an exercise in controlled apophenia but there are dangers in a work like this. My own work veers like her informants toward the uncontrolled, where the connections between events seem crazy. During his treatment of James Joyce and his daughter Lucia, who displayed in her own life and works the characteristics of Joyce’s high modernist prose, the psychoanalyst C. G. Jung compared the two of them to divers deep underwater with only the father having the protection of a diving suit. Lucia would collapse from the pressure into schizophrenia and spent her life in an asylum. Susan is a protected explorer of the uncanny and the oceanic. Deep underwater or deep in the sky, the vertigo and the view are similar.

Where am I in this? I’m on the same flight as Susan. As Susan looks out the plane window into the night sky, the rain streaking across the surface could be tears, but whose? The air is filled with the invisible crowd. The ground is speckled with tiny far-off lights. She sees through the glass darkly, the memories and the tears are not hers alone. It’s her face that is close to the pane. I’m trying to sleep further down the row, maybe I’ll dream. I won’t know who Susan is for years.

Allen Shelton is a professor of sociology at SUNY-Buffalo State. He is the author of Dreamworlds of Alabama and Where the North Sea Touches Alabama.