Josef Sorett and the idea of a racial aesthetic 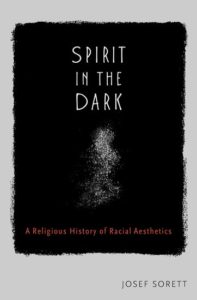 This essay was adapted from the author’s remarks on a panel discussion held at the Heyman Center at Columbia University in February 2017.

Josef Sorett’s Spirit in the Dark is a marvelous book, not least of all due to its meticulous, incisive, and historically informed treatments of the literary sources it assembles. Sorett says that the primary aim of the book is “to narrate the history of the idea of a racial aesthetic” and that the book is written, first and foremost, “with scholars of African American religious history in mind.” Sorett’s story is a specifically religious history of the idea of a racial aesthetic, the point of which is to relate that idea, in its various incarnations, to the evolution of African American and other religious practices in North America from the 1920s through the 1960s.

In addition to weaving together “history and literature,” Sorret tells us he hopes also to attend to “theoretical concerns.” In this essay, I take up those concerns, and some of the issues they raise, for I come to Josef’s book not as a scholar of African American religious history, but as a philosopher with an interest in literary aesthetics generally and in the idea of a racial aesthetic, specifically.

I should like to consider the possibility that it is fruitful to read Josef’s book, not only as narrating a part of the history of that debate, but as contributing to it. But what is the content of that contribution? In Spirit in the Dark, Sorett declines to answer this question explicitly. He answers it implicitly, however—or, at least, provides clues to an answer—when, in the book’s prologue, he emphasizes “the complexities, contradictions, and creative possibilities of Afro-modernity.” And then, in its epilogue, he proposes that Joe Wood’s remark—that “Black Spirit has never meant one thing, or anything concrete, which is its great power and failure”—aptly summarizes “the history of racial aesthetics.”

I will say what I think these clues suggest, but before doing that, I invite you to indulge some philosophical stage-setting, first, by considering two influential, post-1960s explications of the idea of a black, racial aesthetic—Henry Louis Gates’s defense of aesthetic formalism and Sylvia Wynter’s critique of Gates—and second, by considering Paul Taylor’s treatment of the issues at hand in his book, Black is Beautiful: A Philosophy of Black Aesthetics. I consider Sorret’s book with regard to these theoretical responses to the idea of a black, racial aesthetic in order that we might better appreciate it as a valuable addition to theoretical debates about the possible distinctiveness of black cultural productivity that have persisted beyond the 1920s-1960s time period that is the focus of Spirit in the Dark.

Gates defends aesthetic formalism by adapting to the aesthetics of black literature, a line of argument familiar from the New Criticism, evident, for example, in Monroe Beardsley and W. K. Wimsatt’s famous essay on the intentional fallacy.

In “The Intentional Fallacy,” Beardsley and Wimsatt distinguish between internal and external evidence for the meaning of a poem. Evidence of the second sort belongs to author psychology and not, strictly speaking, to the criticism of poetry. Casting their argument as a critique of a version of the genetic fallacy, Wimsatt and Beardsley emphasize the distinction between considerations pertaining to a poem’s meaning and considerations pertaining to its causal, psychological origins.

Now for Gates, the problem presented by “social and documentary” reading of black literature is the problem of thinking blackness in relation to literature. He begins to solve this problem, I suggest, by sketching an argument about the blackness of works of literature that parallels Beardsley and Wimsatt’s argument about the meaning of works of poetry. According to the “race and superstructure” critics Gates targets, “race in American society was held to determine the social relations that determine consciousness, which in turn determines actual ideas and creative works.” For these critics, getting at the blackness of a work of literature was a matter of bringing to light the distinctively black “ideas” or “messages” that reflected the black consciousness of black writers, and that these writers then put into their work. But these critics erred, says Gates, for they confused considerations bearing on the interpretation of a work of black literature as “verbal art” with ideological considerations relating to the blackness of the black consciousnesses and ideas that were causally responsible for the thematic content of that work. For Gates, the evidence that properly pertains to the blackness of black literature is not evidence of mentalities and messages that have engendered that literature, but evidence of the workings of distinctively black rhetorical modalities and forms of intertextuality. Gates advances and explains his particular theory of formal revisionism by adducing precisely this sort of evidence.

Sylvia Wynter’s critique of Gates proceeds from her adaptation of Pierre Bourdieu’s account of Immanuel Kant’s distinction between the taste of reflection and the taste of sense. According to Bourdieu, “Kant’s principle of pure taste is nothing other than a refusal . . . a disgust for objects which impose enjoyment and a disgust for the crude, vulgar taste which revels in this imposed enjoyment.” Where the vulgar taste of sense succumbs to objects that insist on being enjoyed, the elevated pure taste of reflection expresses “the distanciating power of representation, the essentially human power of suspending immediate, animal attachment to the sensible and refusing submission to pure affect, to simple aesthesis.” Wynter follows Bourdieu in correlating the opposition between the taste of reflection and the taste of sense “with the domination of the middle class over the lower class at the level of the socio-political structure of our present order.” That correlation is replicated, she adds, “at the global, socio-cultural level of race.”

Now on Wynter’s account, Gates’s formalist black aesthetic effectively “translates” the opposition between the taste of reflection and the taste of sense into the correlated opposition between “close reading practices aware of the Black ‘tradition’” and “sociological approaches to black literature,” thereby keeping in play “the same ‘rules of the game,’” and thereby “reinforcing . . . our present cultural imaginary.” In contrast to Gates, Wynter re-values the terms of the opposition between taste of reflection and taste of sense, now valorizing the latter at the expense of the former by representing “feeling,” or, again, what Bourdieu calls “simple aisthesis,” as the driving force of a politics that contests a cultural imaginary predicated on the taste of reflection. To put the point a little differently, she effectively aestheticizes black and various “Third World” cultural practices by representing them as expressions of a sense- or feeling-oriented taste—or, again, of a specifically aisthesis-oriented taste—whose “telos is that of the well-being of the individual human subject and, therefore, of the species.”

In sum, Gates and Wynter both answer the question that is a unifying theme of Sorett’s book: What defines the distinctiveness of black cultural productivity? Gates answers the question by racializing aesthetic form; that is, by claiming to identify a distinctively black mode of rhetoricity. Wynter answers it by aestheticizing racial subjectivity; that is, by distinguishing the subaltern black subject from the reflective, discursive, white, middle class subject in terms that highlight the former’s power of sensibility—namely, its ability to feel or to be affected through the media of the senses. How does Sorret answer the question?

The subtitle of Paul Taylor’s book, “A Philosophy of Black Aesthetics,” is telling, for his use of the plural suggests that he has given up the idea of identifying a set of properties distinctive to black cultural productivity. And, indeed, Taylor tells us in his book’s first chapter that, following the art historian Richard Powell, we should not think of the concept of a black aesthetic as picking out a “singular and ‘unrealistically inclusive’ cultural monolith.”

Rather Taylor conceptualizes black aesthetics (again, with an “s”), or the black aesthetic tradition, as the use of “art, criticism, or analysis to explore the role that expressive objects and practices play in the creation and maintenance of black life worlds.” In addition, he intends his own philosophical enterprise 1) to identify some of the themes (e.g., invisibility, authenticity, the meaning of black music) that the black aesthetic tradition has recurrently interrogated, and, 2) to examine the registers of inquiry and argument that have shaped that interrogation. In effect, Taylor sets aside the project of defining the distinctiveness of black cultural productivity in order to investigate “the essentially philosophic preoccupations that routinely animate and surround the culture work of black peoples.”

Here, I have dwelt for a moment on Paul Taylor’s book, because, I believe, it provides us an excellent framework for appreciating Josef Sorett’s response and contribution to the ongoing debate between defenders and skeptics of the idea of a black aesthetic. Reading Sorett, in light of Taylor, I wish to suggest that Sorett too sets aside the project of defining the distinctiveness of black cultural productivity—in his case, in order to investigate the recurrent thematization and interrogation of religion’s role in debates about that idea.

Echoing Albert Murray, Sorett’s emphasis on complexity, contradiction, and the difficulty of finding some one, concrete thing that “Black Spirit” signifies suggests that he himself is skeptical of the prospect of identifying a set of properties that distinguishes and unifies the manifold instances of black cultural productivity. Without supposing, in the spirit of a Gates or a Wynter, that black aesthetic traditions typically embody racially distinctive aesthetic forms or a racially distinctive aesthetic taste, Sorett, like Taylor, encourages us retrospectively to reconstruct and to analyze the topical preoccupations and profound disagreements that have helped to constitute those traditions. In Sorett’s view, as I read him, the history of racial aesthetics is not the history of an aesthetically monolithic black cultural productivity. Rather, to echo Taylor, it is the history of a conversation through which largely black artists, critics, and the like have explored the importance of their work to the perpetuation of black life worlds.

Robert Gooding-Williams is a professor of philosophy and African-American studies at Columbia University. He also serves as director for the Center for Race, Philosophy, and Social Justice.