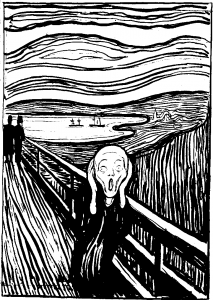 This essay is the first of two parts, inspired by a conversation between the author, Judith Gurewich, and Robert Orsi. The second essay expands on their discussion.

It would not have taken long for French psychoanalyst Jacques Lacan to realize that President Donald Trump has a paranoid vision of the world. This does not mean that President Trump is insane, but rather that he has never left the mental space we all inhabited as toddlers and that we have never entirely forgotten. A glimpse of this place comes vividly to mind when we feel insanely jealous, dismissed, or ignored. But most adults no longer live here day in and day out, because the love we took in as children is usually strong enough to help us fashion an image of ourselves that we can rely upon when we feel challenged. Moreover, and this is maybe counterintuitive, we have learned to turn our toddler frustration of not getting what we want into an eagerness to charm, seduce, or conquer. And if along the way we had the right mentors to emulate, we may even be capable of acknowledging ignorance and taking responsibility.

The paranoid structure is not foreign to us because it is a rigid, simplified, and distorted version of the ordinary way we see the world. In that sense President Trump’s behaviors, discourse, and actions are not as erratic as they appear. They follow a logic that we are equipped to understand.

President Trump is plagued with one irreparable ill: he cannot sustain a positive and amiable vision of himself for any length of time without reaching for some concrete and immediate form of recognition. The mirror stage, one of Jacques Lacan’s most famous contributions to psychoanalytic theory, uses the image of the mirror to describe how a toddler can only recognize who he is in the mirror if he sees in his mother’s gaze how much he is loved and acknowledged. If attention is paid to someone else, the toddler will use every strategy to become the center of attention, because psychic survival depends on it. There may be conflict at some point between this craving and the relief of being told “no.” Most often, relief wins this struggle. But those who never felt secure in their mother’s love will mistake discipline for rejection and miss the opportunity to be calmed down by other means than short term narcissistic gratification.

For President Trump, as I can only surmise from his public behavior, authority must have rarely felt constructive or reassuring, and the distinction between immediate gratification and love must not have been fully experienced. Therefore, in his emotional landscape, tall buildings branded with his name in great letters, hotels with golden rooms, and golf courses remain substitutes for the magic of being seen and taken in. But all such substitutes are inadequate.

In that sense, President Trump has never fully overcome the mirror stage. We have all witnessed his visit to President Barack Obama. President-elect Trump had insulted Obama for months during the campaign, yet on this visit he behaved as if he were a shy child who could not believe his good fortune! President Obama’s grace operated for the time of the visit like a glorious mirror sending back to the newly elected candidate one of the best images of himself he had never experienced! This is certainly what the encounter looked like in the media.

I imagine that President Trump at that moment wished he might have stayed forever in Mr. Obama’s attentive presence, in order to experience maybe for the first time how a benevolent authority figure sees him for whom he desperately would like to be. It was clear at that moment that President-elect Trump was sincerely moved.

But President Obama moved out, perhaps to Mr. Trump’s chagrin, and now the new president of the United States is left to his own devices. It is unclear if his dream was the one he wanted after all. A toddler may want everything he demands, but he is rarely happy to get it.

Lacan said that the dominant characteristic of a paranoid is that he is always right. “Le paranoiaque a toujours raison.” The paranoid cannot afford to be wrong, so he is always going to be right to the point that he causes others to start wondering about their own sanity. “Mauvaise foi” is a weapon like no other and it develops its own momentum. Fake news? Are we absolutely sure that real news is not a bit distorted? We begin to doubt.

The paranoid has no choice. He does not have the ability to play with words, to agree to disagree, for example. Grammar is not nimble in his use of it. Truth and falsehood are not categories he is comfortable with. His reality can only be the one that makes sense to him; there can be no other and this reality conforms to very simplistic parameters. At the same time protecting his version of reality is paramount. President Trump is therefore prompt in his response to anyone who challenges him. Criticism of him in the press or by opposition politicians he labels “fake news.” But then if he finds him face-to-face with a critic, in the same room, he retreats, because he cannot handle confrontation.

Take, for example, the small press conference before President Trump’s address before Congress, in which he suggested that he was ready to compromise on immigration. He knew he was not able at that moment to fight back against his critics face-to-face without looking “bad.” So he reverted to a position that elicited smiles and nods.

That he didn’t keep his promise did not matter. Standards about truth have lowered since the elections. People marveled because President Trump read his speech without erupting, and this was sufficient for some to believe he was acting presidential. So here we are, we may be found saying, “he isn’t so bad,” “he may have a point.” We no longer follow the rules of good thinking.

We now barely notice when the president contradicts himself. His version of reality demands banishing from his memory whatever he said before as if he never said it. The truth is what he says today, not yesterday. Being right at all cost is the only strategy the paranoid has at his disposal to fence off anxiety. It is almost an issue of psychic survival because anxiety is not an emotion the paranoid can afford to experience, let alone process. When something akin to it manifests itself, it produces agitation, tweets, and furious recrimination. Instead of feeling the tightening in the stomach, he acts out.

So then why did candidate Trump win the elections? I suggest that he was elected less for what he promised to do than for what he was able to elicit in his audience. This is a tragic case where human fragility was turned on its head to produce one of the most absurdist moments in our history, a victory based on a fundamental misunderstanding. Nobody is more determined to ward off rejection and humiliation than a paranoid, and this is where Mr. Trump’s talent resides. He knows exactly where to go and what to say when it comes to protecting himself from rejection; he plays tough and threatens revenge.

These talents were on full display before unhappy, frustrated, and humiliated white workers, whose real cause of distress is a brutal neoliberal economic system that has undermined them to the point where they cannot muster an empowering image of themselves. They cannot even think what it would take to return them to the status in society they once had. And here comes a man whose business activities go against everything they care about, yet his magic wand operates mysteriously. What did he do? He gave them the illusion that with him it was safe to experience their pain, to voice their anger, to speak their minds. Through his admonitions, shaped by his reduced paranoid vision of the world, he triggered in them an emotional regression (witness those rallies) allowing them to feel publicly needy, wet, cold, miserable, but no longer alone. They found themselves in the presence of a strong and loving phallic presence who tells them he is there now and everything is going to be okay. No need for specific promises and plans. This is simply a way to get back to a place where simple reassuring utterances can be heard and felt at the most primal level.

Is this not a perfect storm of mutual delusion? Because while his followers felt better and empowered, Trump, in turn, used their cheers as if he was the one being taken care of. His fans know how he feels, too. They complain that Trump is a poor kid being mistreated by the mean media, not given a chance to do his job. No wonder he goes back on the campaign trail whenever he can.

What we are living through with President Trump is not directly related to politics in the sense of a constructive political and economic program. It is a political program when it comes to finding objects of hate. Because without hate the paranoid world that Trump has invited his fans to share is too fragile to survive merely on mutual narcissistic gratification. A designated scapegoat is needed to give a semblance of togetherness. We can only love each other if together we can hate an “other” preferably inferior and unthreatening.

Immigrants become the perfect target since they cannot fight back without endangering their status. This is a safe hatred. Building a wall? What a perfect project for the playground. Let us exclude non-whites from our club and make them pay for it. It is win-win, from the great deal-maker, a safe bet, and a welcome yet silent racist displacement not only against immigrants, but African Americans too. This latter hatred is unspeakable from the president’s office, but the president’s surrogates speak for him. After all, were slaves not immigrants too, at one point, says Dr. Benjamin Carson, who knows how to flatter his boss! The cat is out of the bag; it did not take long. Now the Jews are back as a target as well, along with Muslims, queer people, and others. The media too, but the fourth estate is powerful; it will not go away. But revenge is safe when it is taken out upon immigrants, African Americans, Muslims, and Jews, because it will be cheered and echoed by others in the nation who share this hate of familiar others.

Does understanding Trump’s paranoia give us tools to act? The public crisis today is as much epistemological as it is political. This is evident in the media’s befuddlement in covering the president. Their reportorial methods and standards fail them. Even more dangerous, there are signs that public commentators are beginning to find the president’s statements and claims reasonable. There really is a problem with immigrants and refugees, one hears; over-regulation really is hurting the US economy . . . . And in this way, the paranoid’s truth becomes everyone’s truth. The problem of reporting becomes ever more exigent.

Unless the media learns how to approach and report this unfamiliar, unprecedented phenomenon—that the most powerful man in the world literally lives in another reality than theirs—Americans will not be prepared for the political choices they must make until it is too late.

Born in Montreal and raised in Belgium, Judith Gurewich holds a law degree from The Free University of Brussels, a masters of law from Columbia University, and a PhD in sociology from Brandeis University. She is a member of Espace Analytique in Paris, where she was trained as a Lacanian psychoanalyst. Gurewich is also publisher of Other Press in New York.